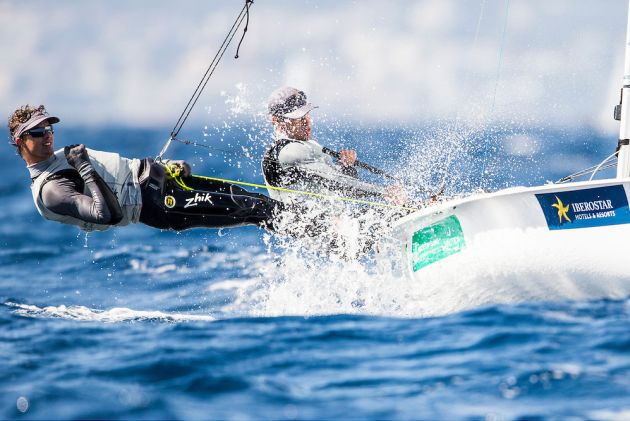 Mat Belcher and Will Ryan on the way to another bullet. Photo Pedro Martinez/Sofia.

France's charismatic four times wold champions Billy Besson and Marie Riou won the Nacra 17 class with a day to spare and win the overall Trofeo Princesa Sofia IBEROSTAR for the best performance at the regatta.

“We are working towards Rio and every result is important, but the finishing place is not a big thing, at this stage it is more about how we sail, trying to do the best job on board each and every day. That is what we are trying to do. But you can never be perfect, you keep trying.” Besson acknowledged before breaking into his trademark broad grin:

” But winning is great and it will be great to be able to meet and kiss the queen!”

The famous Bay of Palma dealt the armada of over 800 boats competing at the 47th Trofeo Princesa Sofia IBEROSTAR a full range of different breezes, just what was really wanted by those sailors who have their courses set towards the 2012 Olympic regatta in Rio.

For the first time Spain's showcase Olympic event offered European countries their last opportunity to qualify their nation for the Olympics. For other sailors it was a selection trials event. And for very many, the traditional curtain raiser to the European Olympic classes season, was a chance to polish their skills in a high pressure, big fleets situation.

Billy Besson's outgoing demeanour may contrast with that of the 470 Men's winning helm Mat Belcher. The 2012 470  gold medallist is perhaps more reserved and wearing his clear, single minded focus on his sleeve. But both Besson and Belcher share the same incredible work ethic and quest for perfection in all that they do.

Belcher and Will Ryan were outstanding as they triumphed in the 470 Men's class by 28 points, winning seven of their total of 16 races. This week they have seemed unstoppable.
Of the message such a dominant win delivers to the 470 fleet and the wider world Belcher less than six months before the Games observed:

“If I was another competitor going into the Games and saw a performance like this then I suppose they might think (of themselves): 'We have things to work on'. ” But all the teams are working on different things at the moment. Each event is treated differently by different crews. And so really we just only focus on ourselves. We are trying to get ourselves ready. We are focused and are working as hard has we can.”

“The Aussies are beatable. They have beaten more times recently but they are so good. They are the hardest boat to beat. They were absolutely launched this week. Our perception is their average speed is always high. They may not always be the fastest boat on the pitch but they are never, ever, ever, ever slow!”

Golden Kiwis
New Zealand sailors completed a notable double in the Men's singlehander classes. In the white hot Finn class Josh Junior brought world champion Giles Scott's winning streak to an end. Scott's challenge was hurt by a broken rudder fitting on Friday, but Junior sailed an accomplished, consistent series. His triumph was matched in the Laser fleet by Andy Maloney who lead from the middle of the week.
Maloney said:  ” I was looking to sail consistently this weel which I did. I was trying to start better and try and sail risk free. And today i wanted to treat it like the Olympics. Only Tonci could beat me and so I had to cover him and so I exectuted that strategy well.”

Scheidt peaking
Brazil's Robert Scheidt, pursuing his sixth Olympic medal, proves he is peaking on time. After winning in Miami in January, winning today's medal race gave him second overall. And there, too, is a message to the Laser fleet. The 42 year old is hitting form as he hoped.

“I am happy with my week. I did not start so well. Day 3 was bad. But to bounce back and finish strong is good for me. The fleet is very tough. I have certain details to improve, starts, light airs, some manoeuvres. You can always keep improving, especially in a very physical boat like the Laser where you have to keep training, you have to work the whole time.”

“The Olympics will be high pressure for sure. Having said that I have been to five Olympics already so I feel like I know what it will be like. The hardest thing will be before it starts, those weeks, but once it starts you are in the bubble. You are in the mindset, you do what you have to do. The Laser is so hard now there are ten guys who can win the medal.”

“Of course there are always things to work on. But last year I was in fourth and fifth and not in the medals and this year I won Miami and finshed second here in Palma. So I hope these guys are worried now!”

For others overall victory probably means much more. Ireland's Ryan Seaton and Matt McGovern won the 49er class, a big endoresemt of the progress they have made, keeping 2012 Olympic Champions Nathan Outteridge and Iain Jensen in second. Outteridge concluded:

“We should have done a bit better. We did not start so well with a capsize early in the week and a capsize in the big waves in the gold fleet. You pull them out of our scores and that is 20 points we lost. We are OK. I would not say we are happy. We can sail a lot better. We need to get more time in the boat. We need more time in the windy conditions, which, for Rio may not be as important, it is typically lighter and flatter. But Barcelona and the Europeans are a big event for us and so coming here and racing in the waves was really important. The result is important here. But it was more important not to do badly!”
The Dutch pair Annemiek Bekkering and Annette Duetz closed out their win in the 49er FX class.

Finland's Tuula Tenkanen also scored her firs big European regatta win leaving Belgium's 2012 bronze medallist Evi van Acker to second in the Laser Radials, in the 470 Women it was also the first big success for the rising Polish duo Agnieszka Skrzypulec and Irmina Mrozek Gliszczynska who clinched victory with second in the Medal race. And Britain's Tom Squires shrugged off tiredness brought on by a tough travelling schedule to win the RS:X Men while Russia's Olga Maslivets sailed for victory in the RS:X Women.