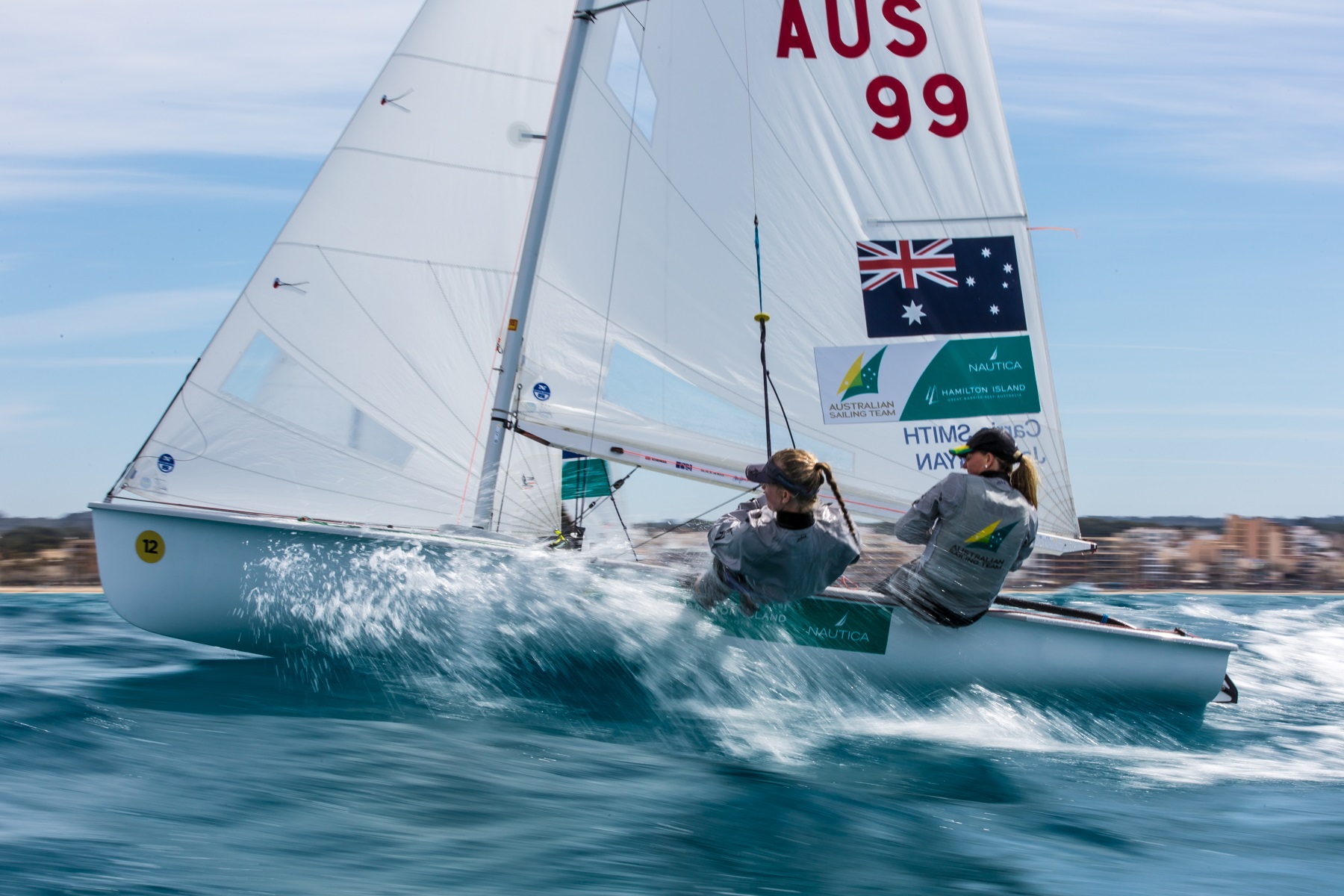 Australia’s finest Olympic class sailors made an impression at the Trofeo Princesa Sofia IBEROSTAR regatta in Palma, qualifying for the final medal race in six of the 10 divisions and locking up a gold and a silver medal.

Saturday on the famous Bay of Palma brought light winds for the concluding double point’s medal race, one last chance to gain and lose places among the top ten.

Palma was the final Continental Olympic Qualification opportunity for nation slots for Europe and Africa. Australia’s team carry a different kind of pressure at Palma in the 49erFX, Women’s 470, Finn and RS:X classes where there’s the gravity of the impending announcement of who from these classes will be selected to join the Australian Olympic Team for the Rio Games in August.

Laser Radial sailor Ashley Stoddart flies in to Mexico for her class worlds starting April 14 and most of the team will meet back at the Sailing World Cup in Hyeres starting April 25, 2016, the third round of the World Sailing series that began in Melbourne last December.

Men’s 470
After winning six of their 11 races, Australian men’s 470 pair of Mat Belcher and Will Ryan netted a final low score of 21 versus the silver medallists from the USA on 49 points. There were a couple of key players missing but Belcher and Ryan’s performance still poses a challenge to the rest of the 470 world.

On this, Belcher commented: “But all the teams are working on different things at the moment. Really we just only focus on ourselves; we are trying to get ourselves ready.”

Post the gold medal showdown skipper Mat Belcher said: “It was pretty relaxed coming into today; it’s always a nice feeling to know you’ve won coming into the final race. We waited for breeze and ended up in great planing conditions so we couldn’t ask for more.

“We were missing the Croatian and French team here but still had a great fleet of 84 boats, twice what we had at the worlds (in Argentina). For us, this event is about getting back into a rhythm. It was a great boost for us and now it’s about keeping the momentum heading to Rio,” Belcher added.

The pair starts the 470 European Championships in four days’ time.

Women’s 470
Australian 470 sailors Carrie Smith and Jaime Ryan finished the regatta in seventh overall thanks to a win in the final medal race that put them once place closer to the Polish gold medallists.

“We won today’s medal race which was a great result for us.  That’s our first win together in a medal race,” a jubilant Smith said. “It was quite tricky out there.  The wind was light and all over the place so it was a complicated race but we managed to stay on top and get ourselves one spot closer, into seventh.  Essentially, we need to keep improving, to keep proving ourselves to the [selectors]. We’d like to be top 10 at both the Europeans and at Hyeres, that’s our goal.”

“We are really happy with the event,” agreed Ryan. “We’ve seen a bit of everything and it’s been good practice for us for our Europeans next week, we have more of an idea what to expect. We are feeling pretty good about it.”

Women’s 49erFX
In the light conditions and final short course, opportunities to make gains were hard to come by. Tess Lloyd and Caitlin Elks hung onto fifth place in the women’s skiff class and take confidence, and a list of areas to work on, to the next event, the 49erFX European Championship in Barcelona.  This regatta represents a nice step up in their performance in a world-class fleet.

“We managed to stay in fifth.  It was pretty light out there… 6 knots and a short course, so it was hard to make gains,” Lloyd recounted. “The Europeans is our next event and a really important event for us.  We have to keep up our performance.”

On the 34-strong fleet Elks said, “There was a really good mix of experience in the fleet. Palma was quite challenging with all sorts of conditions, it was about who managed the conditions the best and who transitioned to the next weather thrown at you. We managed that quite well.”

“Going into the medal race we were 15 points behind the Irish and 13 ahead of the Spaniards so it was going to be pretty difficult to change position, plus the weather was tricky,” said skipper Outteridge. “The Irish did a good job of making sure they didn’t give us a chance to get a split on them. It was an eventful race and we are pleased with the outcome. It’s good to get this racing done early in the season; we’ll have a list of things we need to work on.”

Palma is the first regatta of the European season and as far as Jensen is concerned they did a lot of the small things right, which added up to second overall from a tough field. “I think we’ve done a lot of the small things right but we had some bigger things happen, like taking a couple of swims that cost us points this week. Hopefully we can get on top of the boat handling then as long as we start well and Nath keeps picking the shifts we’ll hopefully get a good result at the Europeans.”

Outteridge and Jensen move to the Olympic sailing venue in May where they will train full-time for the Rio Games to defend their gold medal win at the London Games in 2012. “We are excited to get to Rio and train with the Irish team.  Our coaches have organised a couple of mini regattas.”

Australia’s Will and Sam Phillips ended up in seventh place and David Gilmour and Lewis Brake in eighth.

Men’s Finn
New Zealand’s Josh Junior clearly out-sailed the international line up but the competition for the silver and bronze Finn medal was red hot as Australia’s Jake Lilley explained: “There were four guys vying for the silver and bronze. I was second out of us around the bottom mark in the medal race but got caught on the wrong side of a big right hand shift and couldn’t really recover. I finished the regatta fourth overall and two points behind the silver medallist.

“Palma was a big regatta for the Finns, all the big hitters in terms of the Olympics were here and that’s the last time we are going to get that before the Games. To come fourth is a really pleasing result.”