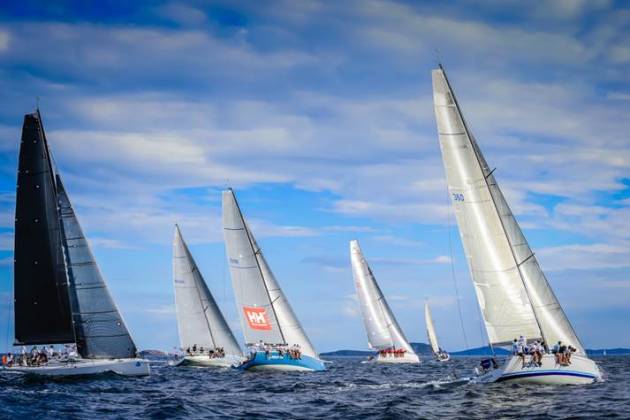 Sail Port Stephens begins in less than a week and many bright sparks have entered one or both of the feeder races to cruise in company for the social aspect, or as their last chance to be regatta-ready before the week-long series begins on Monday April 11.

It means much more to two Royal Prince Alfred Yacht Club boats contesting the final event of their Bluewater Series spanning eight months. Only final points from the BWPS decider can separate Rob Alder and Bill Bailey’s Cookson 12 Occasional Coarse Language One and Richard Hudson’s Farr 45 Pretty Woman at the top of the PHS and IRC pointscores.

The Cat-3 Pittwater to Newcastle race is due to start 10am on Saturday, April 9. RPAYC sailing manager Brendan Rourke says: “The race to Newcastle is the traditional end to the Bluewater series and a great feeder race to the Newcastle race and Sail Port Stephens regattas. For the RPA boats it’s a one way trip to Newcastle which closes out our season.”

After the fifth of six offshore races, Pretty Woman leads OCL One by one point on IRC results and on the PHS scoreboard it’s the opposite order with OCL One setting up a three point lead. OCL’s co-owners Rob Alder and Bailey divide up the racing calendar and Alder steers the offshore events. Scanning back through this season’s results shows OCL fared better in the longer Cat 2 races and Pretty Woman in the Cat 3 events.

“This weekend will be another interesting Cat 3 race; it’s on with Richard!” Alder declared today.

There’s a tinge of sadness coming into Sail Port Stephens for the OCL crew and many other crews given the passing of champion yachtsman Roger Hickman last month.

“This year we won’t have Wild Rose and that’s rather sad,” Alder added. “For us the Farr 43 was the boat we looked to. If Roger was 30 seconds behind us on a windward/leeward race and we beat him by two minutes, we knew we’d had a fantastic race.”

A quick turnaround has some of the Pittwater to Newcastle fleet of 18 yachts plus newcomers lining up this Sunday for the Newcastle Cruising Yacht Club’s Newcastle to Port Stephens race.

The second feeder race is the perfect opportunity for the Sydney crews to get a feel for what Lake Macquarie and Newcastle’s sailing communities will bring to the table at Port Stephens. So far 32 yachts representing a good spread of clubs are registered for the 10am start.

CEO of NCYC Aaron Harpham says, “Similar to previous years the Newcastle to Port Stephens coastal dash includes the ability to conduct a unique rolling start, whereby if wind conditions require it the race committee will instruct the fleet to commence motoring towards Port Stephens until such time as they deem there to be enough wind to start the race.”

The social program has been published online.