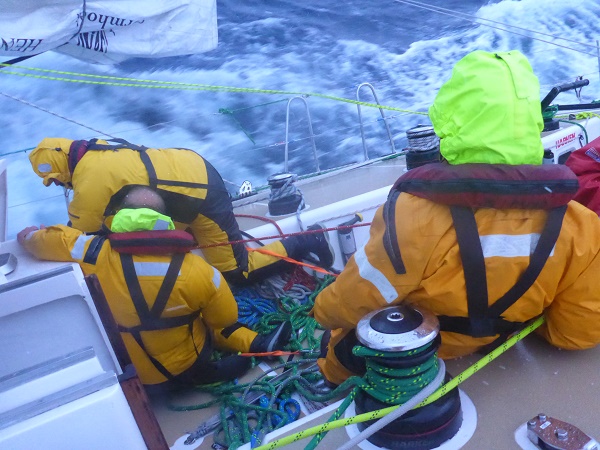 The big anticipated front expected yesterday failed to materialise, but the next storm is now moving over the Clipper 70 fleet in the Seattle Pacific Challenge.

Today’s front should have gusting winds of around 40 knots, increasing to 50-60 knots in 24 hours’ time, after which it should start to ease and also move east of the fleet, the Clipper Race’s Meteorologist Simon Rowell said in his weather briefing to the Skippers this morning.

The teams’ orange storm sails are ready on deck in anticipation of the front, but some yachts have been flying spinnakers in the more stable winds over the past day.

The boats on the western side of the course are being hit by the front first, and should have the ability to make good gains on the boats ahead to the east.

Meanwhile, Da Nang – Viet Nam, IchorCoal and PSP Logistics and Visit Seattle are crossing the International Date Line this morning, a significant milestone on the circumnavigation.

Derry~Londonderry~Doire is still leading the fleet. ClipperTelemed+ has moved up into second, and Unicef is up a place in third, with LMAX Exchange in fourth, down two places on yesterday. 83 nautical miles separates the four teams after 3,400 nautical miles racing in the North Pacific so far.

Bob Beggs, Skipper of Qingdao, in eighth place, said he had been keeping a sharp eye upwind, looking for tell-tale signs of squalls approaching.

“[We have been] perhaps sailing a little conservatively, but it always pays to look after the boat you’re racing in.

“The first weather front is now upon us and so far it has been relatively plain sailing, which I am sure won't last. The later front, when it arrives, will surely pack a punch and hopefully propel Qingdao quickly towards Seattle.

“The weather has been overcast but the temperature has been a little less cold now the wind is from the south-west. Hoping the weather in Seattle is warmer than here…we'll wait and see,” Bob added.

Greg Miller, Skipper of Mission Performance, in seventh place, said his team was prepared for the strong winds, and ready to take advantage of the favourable direction.

“This is nothing that we haven't already been through or seen before, but we are in the Pacific so there isn't a lot of land to stop massive waves building quickly. It will be behind us so at least we will be going in the right direction.

“The boat has been prepared for heavy weather, with four loaves of bread being made as I type, dinner for tonight has been prepared, as have a number of other things. We are as prepared as we can be for this weather, but at the moment we are flying our lightweight spinnaker.

“The Warriors are in high spirits after a little respite from the constant pounding of the northern Pacific weather and sea state, with this ridge of high pressure being blown through, and we are ready for the next onslaught!” Greg added.

To read more about the significance of crossing the line, click here.