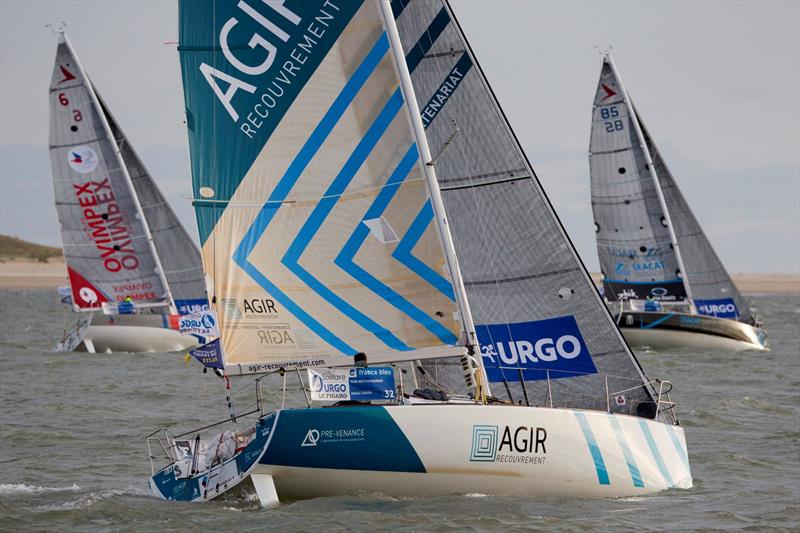 Starting in Gijon, Spain on the southern coast of the Bay of Biscay the 43 solo La Solitaire Figaro sailors will first traverse Biscay a distance of 275 nautical miles from south to north in open seas with the leg finishing in the popular and well known Figaro port of Concarneau.

Following a full on Leg 1 with the fleet experiencing winds of 40 – 50kts the sailors will be looking forward to kinder conditions. Saturdays start will see the fleet complete a course in the bay of Gijon in a very light Northerly breeze of around 5kts, the fleet will head northwest towards Chaussee de Sein, negotiating the light breeze and a ridge of high pressure in the middle of the bay that will test the fleet.

Currently ranked in 2nd place after the first leg Adrien Hardy (Agir Recouvrement) looks forward to the second leg “With the current state of the weather forecast, the Gijón-Concarneau stage seems rather uncertain and tricky.

Overall, the wind should be fairly low or even very weak on the first night. It could last 4 nights for a Wednesday morning arrival in Concarneau. There can potentially be significant deviations in the best route for this next leg with such a light and badly established wind.

The boat is exhausting in these conditions because you have to constantly read the weather and conditions you are experiencing and frequently adjust the boat. But mentally and physically I am in good shape so ready to get into the battle!”

Mary Rook (Inspire +) “This will be my first proper full crossing of the Bay of Biscay so I’m looking forward to getting that under my belt, leg 1 was full on with big winds and big seas so I am looking forward to slightly more benign conditions so we can really race the boats instead of survival mode.

“These conditions do require a huge amount of concentration though, keeping the boat going can be exhausting but I’m confident of my boat speed in these conditions so looking to stay in touch with the pack.”

Once the fleet has crossed the Bay of Biscay they will return to familiar waters of the Brittany coast, rounding a mark in the Chaussee de Sein area before electing to hug the coast or take a more offshore route to round the island of Ile d’eu before the final leg into the finish in Concarneau. With very light conditions forecasted the fleet could expect the course to take up to 4 nights to complete.

Leg 2 will see the battle at the top of the fleet with favourites Nicolas Lunven (Generali) Charlie Dalin (Macif 2015) and Yann Elies (Queguiner – Leucemie Espoir) all looking to dominate the top spots. Erwan Tabarly (Armor Lux) and Jeremy Beyou (Charal) will be looking to climb the rankings after a tough first leg sustaining damage.

After having retired from leg 1 the only American entry in the race Nathalie Criou (Richmond Yacht Club Foundation) is upbeat and looking forward to leg 2 “I was disappointed to have had to abandon leg one but I decided it was probably good seamanship – the ocean’s not one to negotiate with.”

On the challenge of leg 2 Criou continued “I definitely hope to improve on boat speed and will concentrate on my mental focus, light air can be a lot tougher in some aspects as you constantly have to tweak things. I’ll try hard to stay with the fleet and post a strong finish.”

Top ranked Brit after Leg 1, Alan Roberts (Seacat Services) summed up his thoughts ahead of the Leg 2 start: “The start is going to be tricky for sure, getting out of Gijon could be very slow – I think the first quarter is really going to be the defining element of the race.

“The coastal section along the Brittany coast will be great, it has its local affects which make things a little interesting – these are familiar waters to me having raced all around them for the last 3 years, however, this is the backyard of the French and they have 20 years on me.”