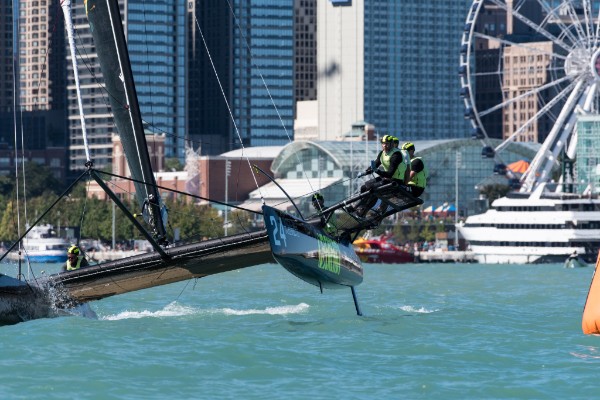 September 22, 2018 (CHICAGO, IL, USA): Day Three of the M32 World Championship was another day of shakeups in the standings. With a fleet of twelve eager competitors, general recalls quickly became the norm and no one was left out of the lead. While ChinaOne.Ningbo remains ahead of the pack, Bliksem, Convexity and REV are in close contention for the Corinthian Championship.

XS Energy and Bliksem were the happy couple of the day skipping around the race course and getting sucked into a dogfight with lead changes, covers and rolls while losing ground on the rest of the fleet. After a fairly steady second day two, Bliksem spent too much time in the middle of the fleet losing their grip on second.

With a multihull background from the America’s Cup, Bliksem’s tactician Tom Slingsby did his best to keep the options open on a course where tacticians had to connect the dots to stay in phase, maintain pressure and keep their options open. Unfortunately, Bliksem also ended up hooked on one of the marks in just one of many situations where they gave up their lead.

“As the breeze died throughout the day, you prayed to the wind gods as you were sitting there in no wind and a puff would hit you or it would hit them, so it was a very tough day,” lamented Slingsby.

Despite getting locked up with Bliksem across the course in more than half the races today, XS Energy made strides to move up in the standings. The dying breeze set the course up like a minefield with holes everywhere. While XS Energy had one eye on Bliksem, they were able to connect the dots and stay in good pressure.

There was no better example of XS Energy keeping their eye on the prize than in Race Four when a windward mark unexpectedly deflated forcing all the boats to round the starboard mark. Boats like XS Energy that were on the port layline were in a stronger position since they didn’t have to throw in an extra tack in the logjam of boats. Even though they were in the back of the pack when the Race Committee made the announcement, Ryan DeVos snuck inside of the dogpile at the mark to move into a top three finish.

With the shakeup, there is a three-way battle for fifth between XS Energy, Convergence, and Extreme2 going in to the final day of racing.

REV played the day’s inconsistencies to their advantage and moved ahead as the only boat in the fleet to not have a bottom three finish. “Rick [DeVos] did a great job driving through the transitions. He kept the boat moving fast while keeping the options open for me as the tactician,” said REV’s Ian Williams. “With the very shifty conditions, there were lots of opportunities to move forward or back in the fleet. We just wanted to have a shot going into the last day.”