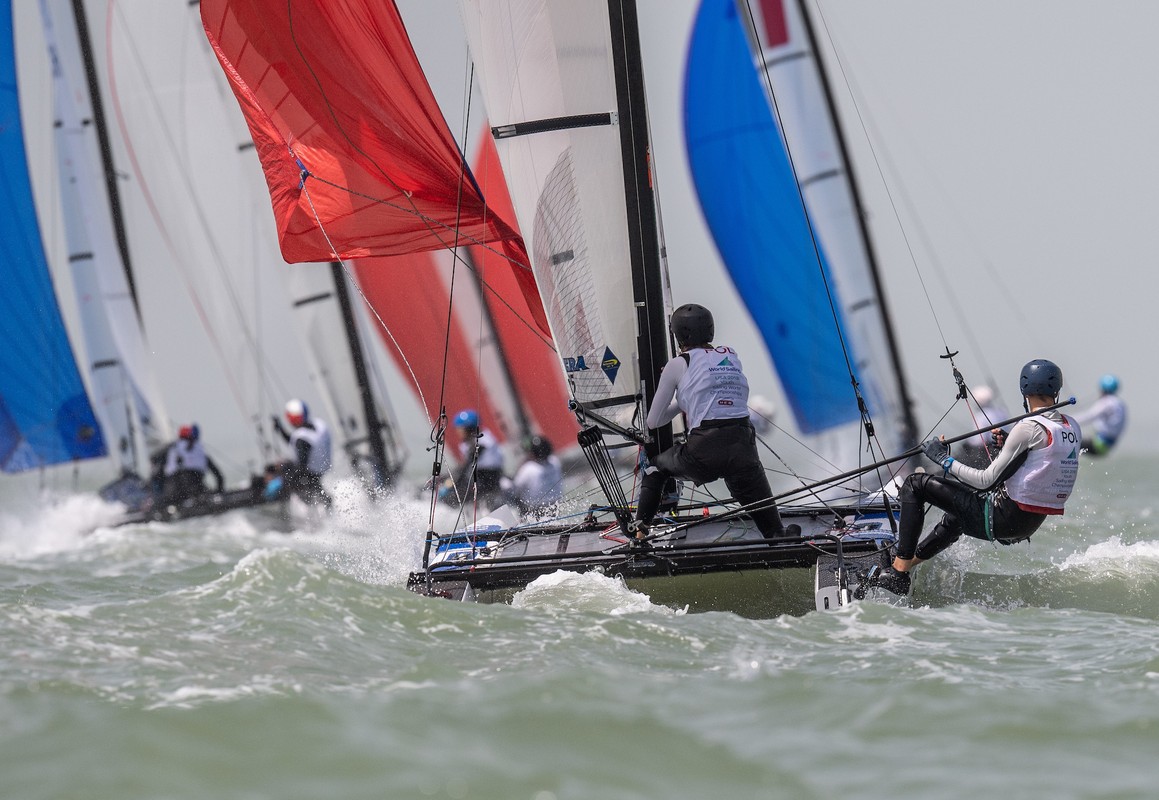 In winning all three races by comfortable margins, Argentina's Nacra 15 crew of Teresa Romairone and Dante Cittadini have forged a comfortable lead in the open multihull class at the 48th Youth Sailing World Championships.

Romairone and Cittadini have posted the low score of eight points, good for a 13-point lead over Germany's Silas Mühle and Romy Mackenbrock. The German duo is tied with Belgium's crew of Henri Demesmaeker and Frederique van Eupen but hold the tiebreak advantage with two first-place finishes to the Belgians' one.

The day, however, belonged to the Argentinians.

“I think we managed to have good speed and to be consistent,” said Romairone. “We didn't have great starts but we were fast and played the gusts well.”

Romairone sailed the Youth Worlds last year in the 29er Class and placed 18th. She switched to the Nacra 15 at the behest of Argentina's sailing federation in preparation for the Youth Olympic Games, which will be held in Buenos Aires in October.

“This is very exciting,” said Romairone. “There are so many different people, it's very fun and good preparation for the Youth Olympics.”

After two days of racing with anywhere from four to six races completed, the top three in many classes have started to separate from the pack after being tightly bunched yesterday. It's a testament to the good sailors figuring out the racecourse and how to keep their boat moving in the choppy waters and gusty winds.

Romairone and Cittadini weren't the only ones to put forth great efforts today. Norway's Mathias Berthet and Alexander Franks-Plenty moved into the lead in the Boys' 29er Class by posting a 2-1-1. They now have the low score of 11 points and lead Seb Lardies and Scott Mckenzie of New Zealand by five points with Australians Henry Larkings and Miles Davey another two points behind.

Berthet and Franks-Plenty also represented Norway at last year's Youth Worlds in the 29er, where they won the silver medal. They got off to a slow start this year with a 6-8 in the first two races, but in the four races since then have found a faster gear.

“Yesterday we weren't very satisfied with our speed. We weren't used to the choppy conditions,” said Berthet, the 17-year-old skipper. “Today we had good starts and a really good feeling on the upwind legs. It was a very good day for us.”

“We're really happy about today,” said Franks-Plenty. “We were sailing it low and fast, Aussie style. It paid off to go right and we started banging the right on every upwind leg. I'm not sure if it was the wind or waves or current, but the right was good. Maybe the wind was a bit stronger.”

In the Girls' 420 Class the reigning gold medalists, Carmen and Emma Cowles of the U.S. stubbed their toes in one race then bounced back to win the second by a large margin. Since they've completed more than three races they're permitted to discard their worst finish. That means that the Cowles are counting three first-place finishes and lead the class by 4 points over Vita Heathcote and Emilia Boyle of Great Britain. Spain's Julia Minana Delhom and Silvia Sebastia Borso di Carminati are third with 8 points.

“We just jumped the line a bit in the first race,” said Carmen Cowles, the skipper. “If we keep cool and collected in the boat, it'll be fine. The event's still up for grabs, so we'll have to stay conservative on the start line. We can give up a half length to not worry about being over.”

The Cowles twins won the class last year by 26 points, counting all firsts and seconds and discarding a disqualification. And although they now have recorded a discard, Emma Cowles, the crew, complemented her sister for keeping the boat moving fast.

“After the start we're focusing on keeping the bow down and going for the pressure,” said Emma Cowles. “Carmen's doing well with the controls in the boat and making sure we have max power.”

Elsewhere in the fleet, Geronimo Nores of the U.S. continued to lead the way in the Boys' RS:X Class. The tall, 6-foot, 6-inch sailor added a 1-2 to yesterday's three first-place finishes, while discarding a fourth, and has six points in five counted races. He leads Italy's Nicolo Renna by four points and France's Fabien Pianazza by seven points.

In the Girls' RS:X Class last year's bronze medalist, Girogia Speciale of Italy, has taken the lead after winning all three races today. Speciale leads New Zealander Veerle ten Have by one point and Islay Watson of Great Britain by two points. The top three have separated from the pack as fourth-placed Weronika Marciniak of Poland is 15 points behind Watson.

In the boy's Laser Radial, it's a trans-Tasman battle, with Kiwi Josh Armit two points ahead of Australian Zac Littlewood.