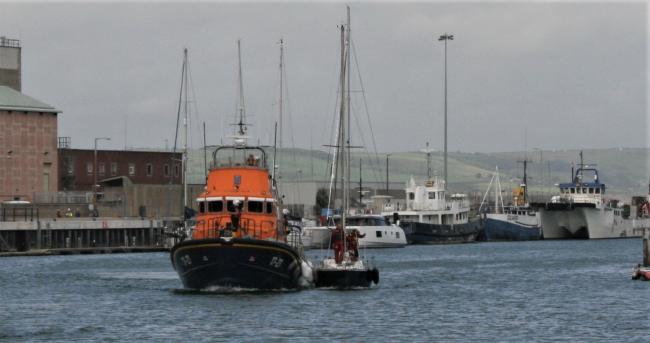 Not an ideal way to finish off the day. Weymouth Lifeboat tows in the yacht. Picture: Weymouth RNLI

Experienced sailors who had just taken part in a prestigious yacht race had to be rescued when their vessel got into difficulty off the Dorset coast.

The crew of three had taken part in the Round the Island Race at the Isle of Wight and were heading back towards Weymouth when the yacht’s engine failed close to Mupe Rocks near Worbarrow Bay, east of Lulworth.

The RNLI said the crew realised that they were too close to the shore with the very real possibility of being run ashore, so the vessel was anchored while attempts were made to restart the engine.

When this proved impossible, they decided to try and sail off of the anchor. However, the force 6-7 winds made this to difficult to do so they sent out a Mayday call to Solent Coastguard.

Weymouth Lifeboat was launched at 2.46pm on Sunday to go to their assistance.

On hearing the Mayday, a nearby charter vessel ‘Snapper’ initially took the yacht in tow. But when the lifeboat arrived on scene, at 3.12pm, the lifeboat took over the tow and brought the yacht back to Weymouth, arriving at 5.20pm.

The lifeboat then returned to station refuelled and made ready for the next shout.