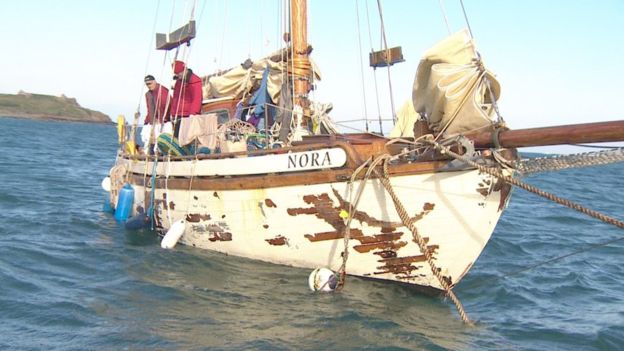 Two yachtsmen who have been rescued nine times in seven months have been described as a “catastrophe waiting to happen” and urged to “leave UK waters”.

In the latest mishap, US citizens Bob Weise and Steve Shapiro, both 71, had to seek help in Hayle Harbour, Cornwall, when their sailing boat tipped over, causing a fire on board.

Veteran sailor Sir Robin Knox-Johnston is among those criticising the pair.

The duo previously told BBC News they were experienced enough for the trip.

The boat, named Nora, left Norway in July and is aiming for the US state of Maine.

Sir Robin said: “This is no longer a joke. It costs between £6,000 and £8,000 every time a lifeboat is launched. These guys are costing the RNLI a fortune.

“They need to frankly pack it in or, I hate to say it, get the hell out of our waters.”

James Instance, from Falmouth Coastguard, said he was not aware of anyone being rescued so many times in a short space of time.

Continue reading here, including details of the pair's misfortunes and rescue incidents.