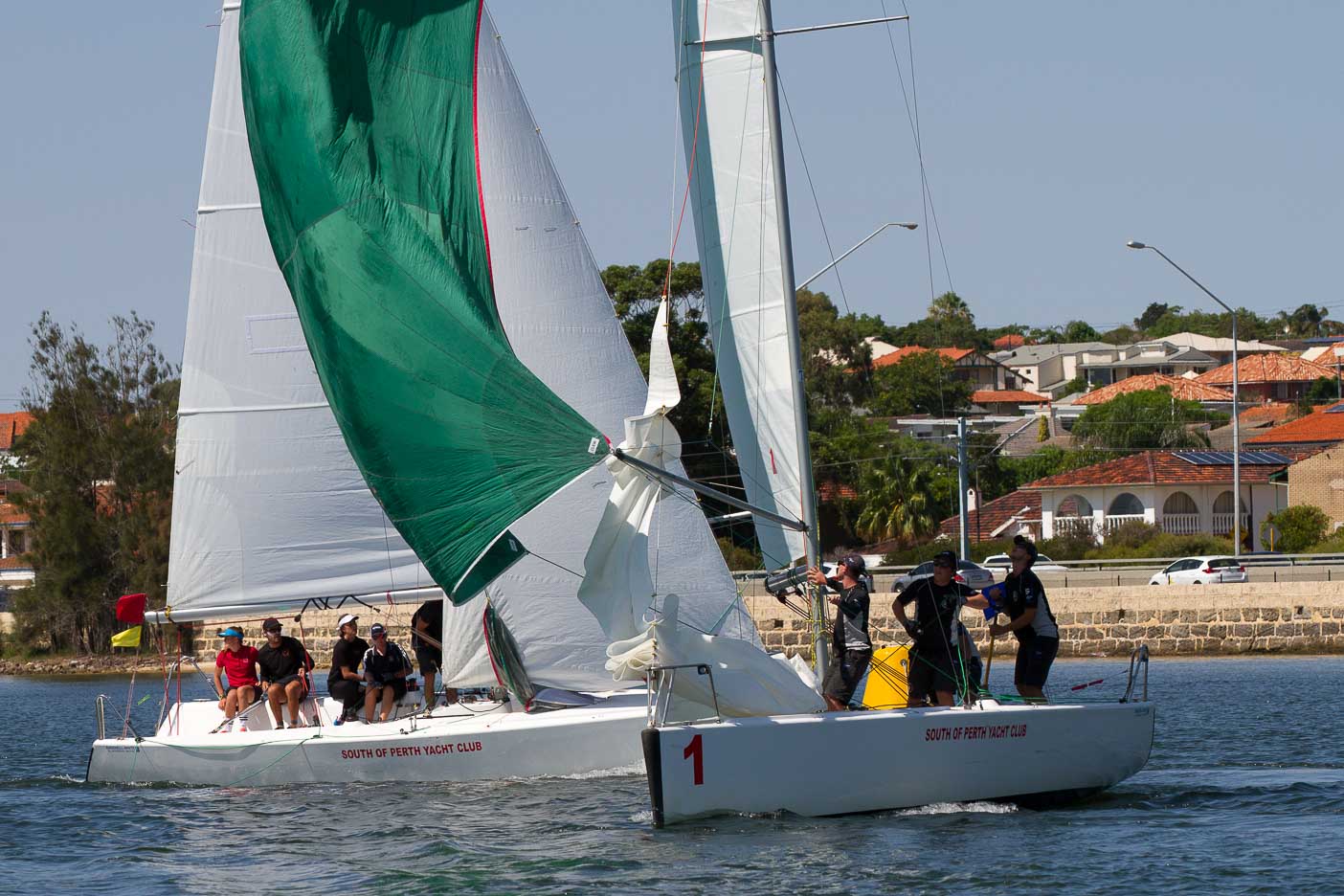 Matt Jerwood trails Lachy Gilmour but his red flag application for redress over a controversial timing error succeeded and the race was resailed. Gilmour won again and went on to win the final 3 matches to 1. Photo Bernie Kaaks.

Lachy Gilmour was at his innovative best in finals series of the Little Wheel Youth Match Racing Regatta conducted by the South of Perth Yacht Club on the Canning River.

The warning signs were there in the last race of the round robin series, when he despatched arch rival Matt Jerwood to finish just one point off the lead after a double round robin.

Jerwood, as skipper for the South of Perth Youth squad, predictably selected Mark Spearman as his semi final opponent and justified his choice with a three-nil whitewash.

In the other semi, Will Boulden and Lachy Gilmour provided what was arguably the best contest of the regatta.  They indulged in some breathtaking prestart moves, coming very close to the start jetty and also the outer end of the pen area. Boulden took the first and third races, Gilmour the second and fourth.  In race two, Gilmour held a narrow lead but carried a penalty.  At the top mark he slowed down to  engage Boulden.  The two laid head to wind for some time before Gilmour was able to claim the new down wind leg and consequently clear his penalty without sacrificing his lead.  Clever stuff indeed! After an even start in their final race Gilmour moved ahead by a slender margin. Try as he might, Boulden could not cut it down.  Penalties played no part in the race as Gilmour cemented his spot in the final.

Gilmour forced a penalty on Jerwood in the pre-start and beat him off the line to claim a comfortable win.  Jerwood raised a red flag protest, successfully claiming redress for a timing error on the start boat.  The race was resailed with precisely the same outcome, Gilmour winning race one for the second time. Although Jerwood claimed the second race, Gilmour took the honours in races three and four to claim the title.

The petit final was won by Mark Spearman.  Spearman trailed Will Boulden in the first race but failure to secure the spinnaker on the Boulden boat swept it overboard. The boat stopped dead while the crew dragged the soggy, water-filled sail back on board, allowing Spearman to slip through and continue safely to the win. Boulden won the second race but Spearman closed it out with victory in race 3.

The local match racing focus will now switch to the Warren Jones Regatta.