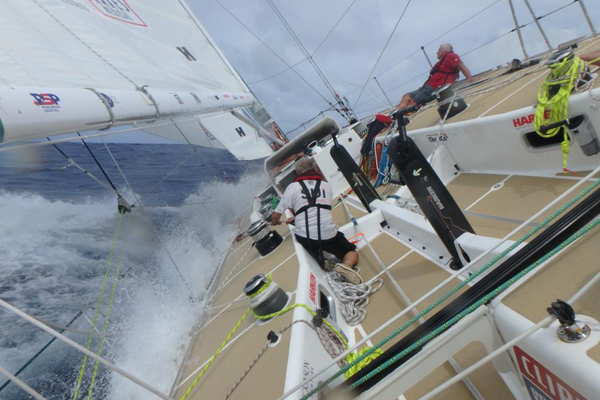 Day 12 has provided “stupendously stonking spinnaker runs” of up to 305 nautical miles covered in 24 hours, as the fleet powers on in the North Pacific Trade Winds. However, it is not all champagne and roses as large gusty squalls, reported up to 50 knots, are currently keeping teams on the lookout for sail changes.

ClipperTelemed+ Skipper Matt Mitchell, now sixth after continuing to make excellent progress alongside Qingdao on the most easterly heading of the fleet, notes: “The wind has been fairly up and down, with it usually hanging around the high 20's to low 30's. Overnight we had some fairly big squalls as well with gusts into the high 40's so it's made the choice of sail plan quite a tricky one.

“We have been erring on the side of caution and settling with our Yankee 1 for the time being. We are still making great speeds however only time will tell if we are able to keep pace with the other boats in our pack.”

Derry~Londonderry~Doire maintains its lead of the fleet which is now racing a little way east of the Philippines, with GREAT Britain still second despite reporting some setbacks including ripping it’s medium weight kite.

LMAX Exchange suspended racing this morning after discovering an abandoned yacht. The team, which was in third place at the time, was in contact with the US Coast Guard in Guam and the Race Director who communicated with Falmouth Coast Guard on the matter. No other Clipper Race yachts were involved. All Clipper Race crew are safe and well and the team has now resumed racing.

IchorCoal’s spirits were raised on board due to improved progress, as Skipper Darren, in seventh place at current time of reporting, says:  “What a night the good ship IchorCoal and crew has had. Over one six hour sched we averaged 14 knots, about two knots quicker than the next fastest boat. And the upshot of all this frantic activity is we have sneaked a place and are now in sixth. With Qingdao a few miles ahead and the next place only 50nM over the horizon this race is still wide open.

“Currently we are making reasonable progress at 10 – 12 knots, but it somehow feels very sedate after last night’s efforts. The midday meeting was a more upbeat affair despite the lingering oppressive heat. With calls for more of the same, we will be chasing Qingdao hard and see what happens next.”

At the back, Mission Performance continues to pick itself up and is closing the gap to eleventh place Visit Seattle, as Skipper Greg Miller reports: “Since my last blog we have had constant winds on the starboard beam which has meant some fast sailing throughout the night and during today. We will be watching the scheds closely to see if we are making any headway in comparison to the rest of the fleet, and hoping that we are!”

The Race Committee has announced extension of the Da Nang New Discovery of Asia race course after the fleet made much faster than expected progress through the Doldrums and has kept up such fast average speeds since. This is due to the immigration rules for Vietnam, and the Tet New Year which means the fleet is unable to arrive in that early. Click here to read the full announcement.

The second episode of Race of Their Lives 2, the documentary that follows the Clipper 2015-16 Race crew’s adventure round the world, is being aired from tomorrow in Australia and Europe. Click here to read more.