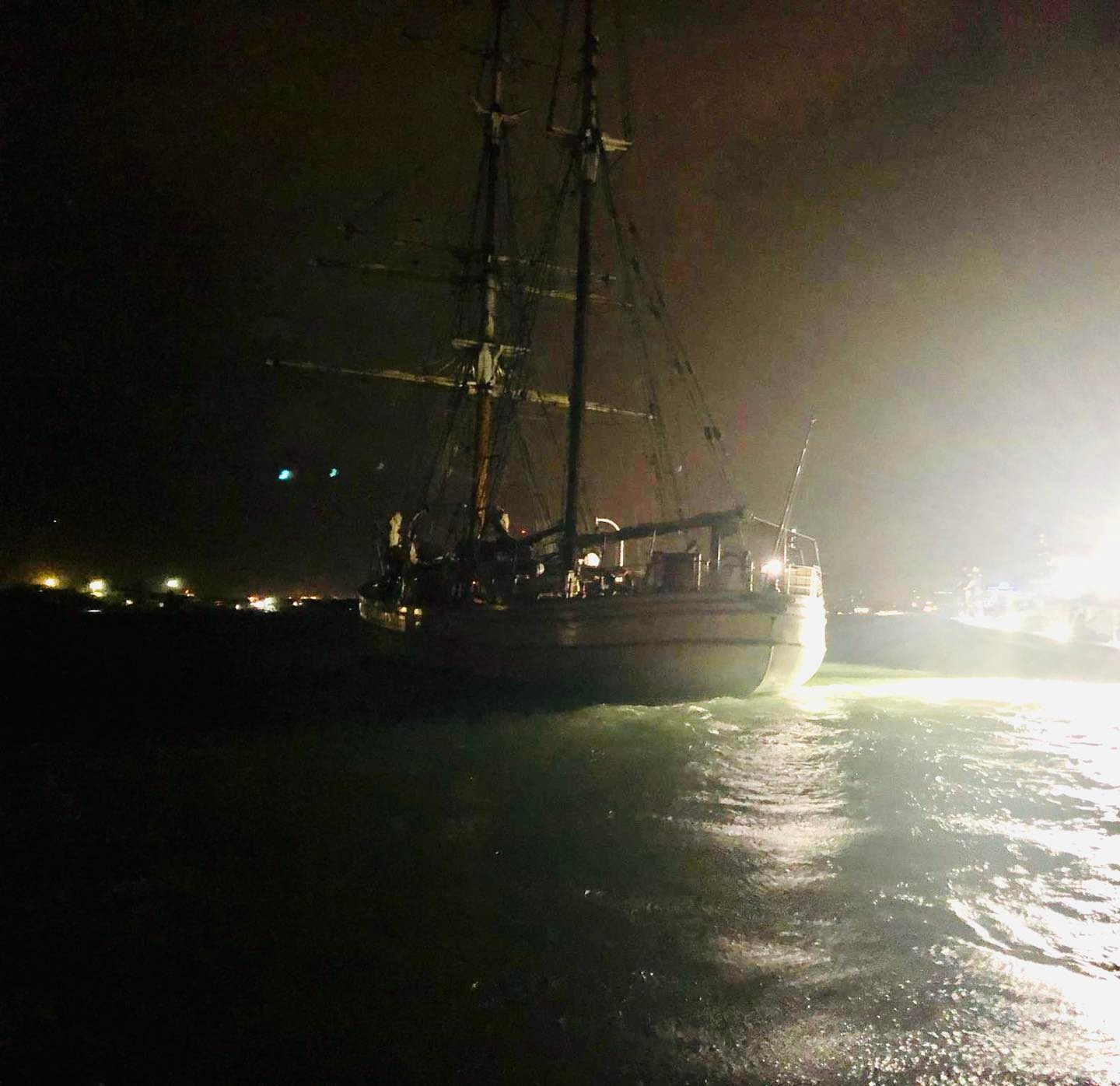 VMR Southport and the Gold Coast Water Police were last night involved in a massive operation to assist a distressed vessel and crew.

At approximately 1640 on Wednesday VMR Southport were advised of a 44 metre, 120-foot, 377 tonne, sailing vessel wanting assistance to enter the Gold Coast Seaway. The vessel was 28 nautical miles north of Southport and would arrive around midnight.

The vessel also reported to have crew members aboard who were suffering seasickness.

Given the sea conditions offshore, meeting the vessel at sea was not an option.

Water Police were notified, and VMR Crews were placed on standby. Around 2100 the vessel reported it was taking on a substantial amount of water, and urgently needed pumps. At around 2230 the vessel reported its location as 2.5 nautical miles north of the seaway, and there was now a major engine room fire. Soon after, the vessel indicated it had lost all engine power and was going to anchor on Deadman’s Bank northeast of the seaway. In doing this the vessel lost its main anchor.

The vessel proceeded south into the main channel of the Broadwater, and with difficulty because of wind and tide, tried to anchor adjacent to VMR. The secondary anchor failed to hold, so a second attempt was needed further upstream, which was successful. VMR had already supplied two water pumps to the ship, and these were working flat out.

The ship advised they believed they were now in control of the situation, and thanked VMR for their assistance. Water Police were still providing assistance to the ship.

Soon after VMR were again contacted by water police advising there was now a medical situation on the vessel and requested they return to assist. A crew member had severely lacerated his foot.

VMR returned to the scene, and took the crew member off the ship, provided medical assistance, and then organised for the patient to be taken to hospital.

This was a fantastic effort by all involved. The ship now appears safe, with a lot of repair work needing to be done before it can again set sail on its journey south.

Thank you to the ship’s crew for their co-operation, to the Gold Coast Water Police for their excellent co-ordination of this incident, and to the VMR crew of Martin H, Glenn N. Peter W, Dave M, radio operators Graeme K, and Kelly J. and co-ordinator Merv. H.