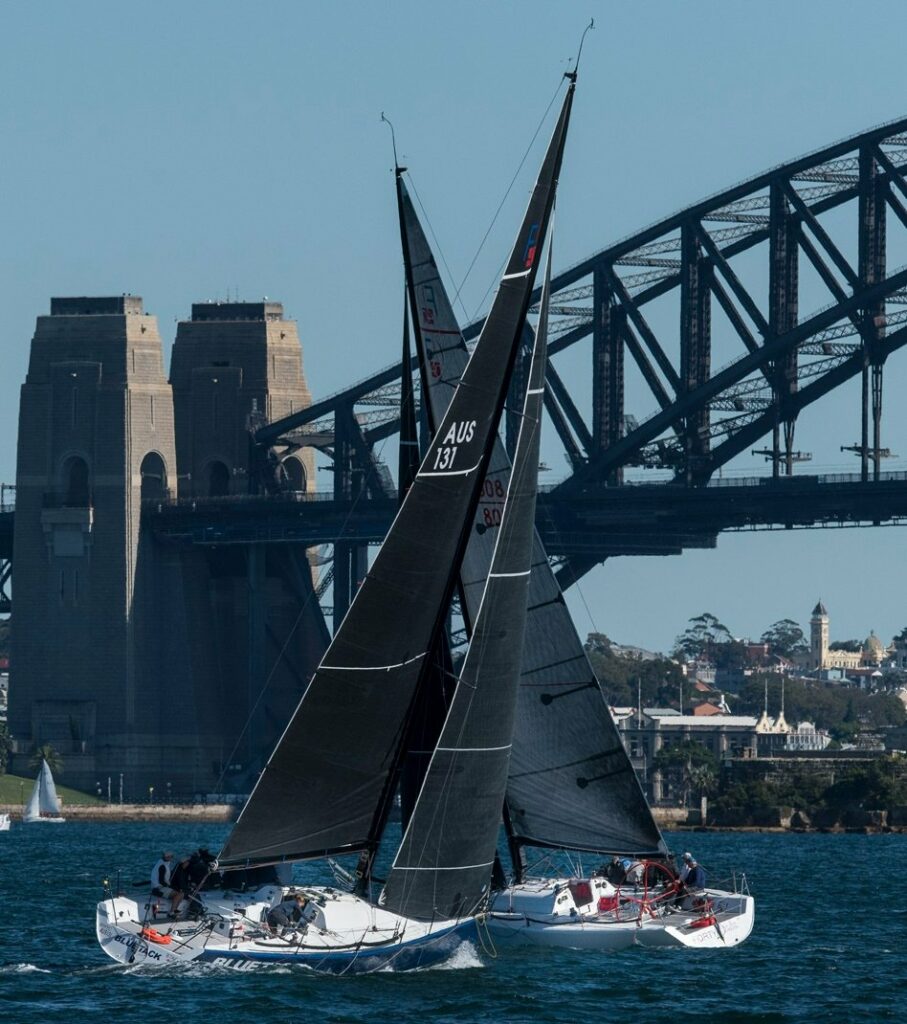 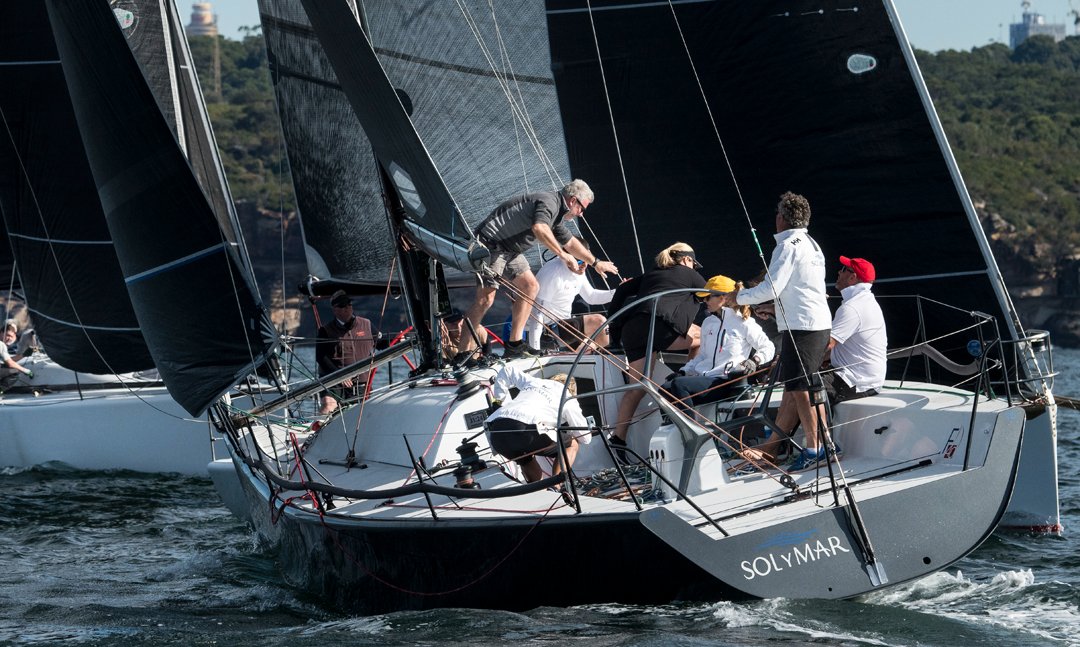 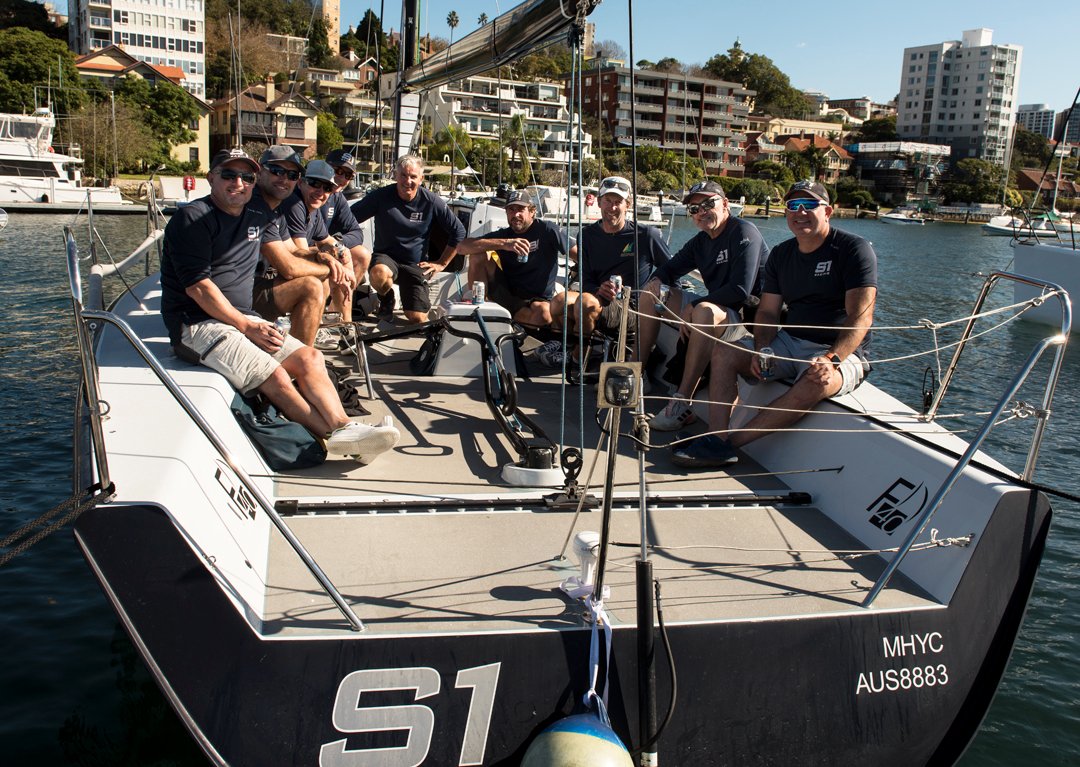 Royal Sydney Yacht Squadron (RSYS) really turned on the charm as host of the Farr 40 25th Year Anniversary Regatta on May 7-8.

For Saturday’s race, Principal Race Officer Rob Ridley set off the eight-boat fleet on a passage race around Sydney Harbour in a pleasant 8 – 12 knot westerly breeze and magnificent autumn sunshine. Nutcracker and Exile both got away to good starts and were neck and neck at the first turning mark, with the whole fleet just behind and converging fast. A tight reach up the harbour to Cannae Point made for exciting rides, and nearly all boats took an involuntary spill at some point. Positions remained relatively orderly for the trip back down the harbour.

However, nothing can ever be taken for granted on Sydney Harbour, and in a race of ‘snakes and ladders’, the whole fleet order changed at the Taylors Bay turning mark, courtesy of a massive wind shadow. Forty and Solymar were to emerge as the new race leaders. Conditions changed quickly in the final few miles of the race, and those who reacted with the tidiest boat handling were rewarded.

Everyone enjoyed the race with Nutcracker sailing well to win, and Forty and Solymar holding on to take second and third respectively. Back at the RSYS clubhouse, cold drinks and a BBQ feast awaited the eighty weary and hungry competitors. Event sponsors Oakdene Wines, North Sails Australia, and Foxtel generously provided terrific prizes for the event Raffle winners. It was a wonderful day indeed, with the iconic ‘Squaddie’ at her glorious best.

Day two of the regatta greeted the fleet with light southerly winds, raising doubts as to whether racing could even take place. In some fine race management work, three short windward leeward races were in fact completed before the breeze completely dropped out. Exile was boat of the day with two race wins and a fifth. Current National champion Edake also had a good day, posting a second, third and fourth.

However, it was consistency across both days of the regatta which was to produce the overall placegetters. After a break from the class, it was terrific to see Sam Hill and Mick O’Brien back to take third place overall in Forty. Also, back for the event, was class stalwart and past world champion Guido Belgiorno-Nettis, who showed all those years of practice haven’t gone astray – Exile placed second overall. But it was the most practiced and consistent team of late who were to take the overall regatta win aboard Nutcracker, guided masterfully around the course by tactician Grant Simmer.

As a newcomer to competitive yacht racing, Peta Davis remarked: “It was an absolute thrill for me as a guest and sponsor to experience racing on the Saturday and meet some sailing icons. Sailing on Sydney harbour was phenomenal and Oakdene Wines look forward to being a part of your next event.”

Regatta sponsor, Mark Bradford, of North Sails Australia had this to say of the weekend: “It was great to be a part of this event. North Sails and the Farr 40 class have a long and successful relationship. This was a great weekend for trading old war stories. It was also great to check back in with a boat and a Class that has given us some of the best racing of our careers.”

Final words to Nutcracker skipper, Rob Davis: “What a weekend, we could not have hoped for a better location and conditions. The class looks to have emerged from the pandemic in good shape and a resurgence in fleet numbers. It’s good to see the class executive has recognised the changing times though, putting in place some new and different event formats. With more initiatives in the pipework’s for next season, the fleet should continue to enjoy a bright future”.

Those at the Farr 40 Class wish to extend their thanks and gratitude to RSYS for providing an outstanding weekend of sailing and socialising.