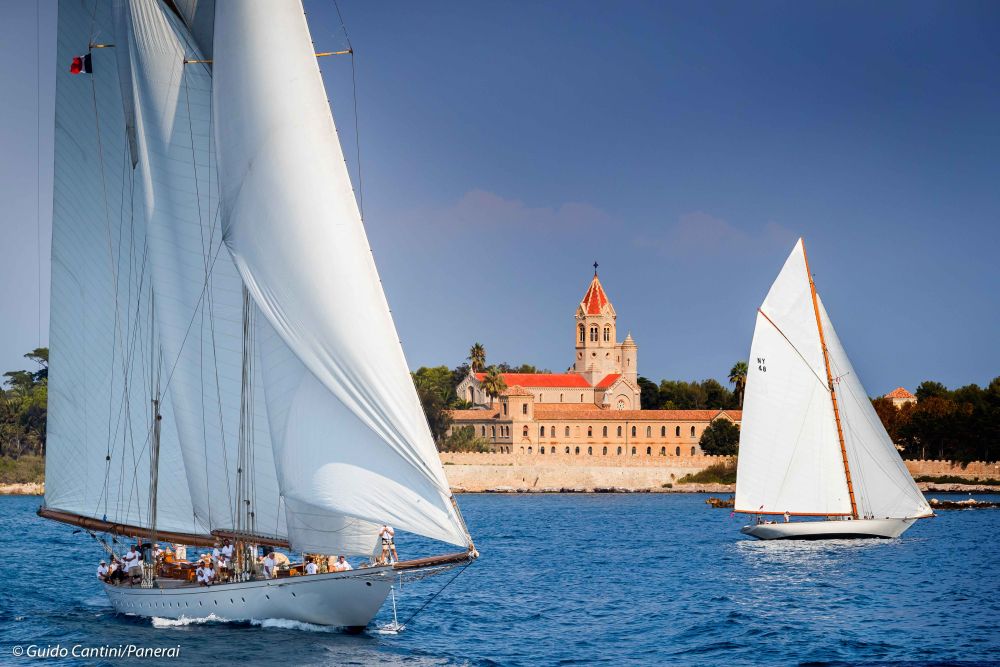 It was an excruciatingly slow day at the Régates Royales de Cannes – Trophée Panerai, marked by very light winds. So much that at mid-afternoon most of the fleet were still out on the water looking for the slightest puff of air to get to the finish, despite a shortened course.

Aeolus was not co-operating much today on the Bay of Cannes. A very light wind, a flimsy 3 to 5 knot-strong south-westerly was all the 80 plus classic yachts were given to complete a triangular coastal course.  The original triangle thus became a V-shaped course, with an upwind beat and a downwind leg sailed under spinnaker. After a nerve-wracking race, patience paid off for the 23Metre Cambria, that was able to escape from the rest of the fleet  on a shortened course and cross the line, positioned  just off the Saint-Marc, in first. Behind them only the 15 Metre Mariska and a few other, whose patience paid off , who were able to sail around the first mark.

One race only
In the Golfe Juan weather conditions were similarly complicated, and the Dragon crews too had to rely on patience, with the Race Committee forced to launch several procedures and have several general recalls before getting a good start, with Estonians on Otium disqualified for being over the line with a black flag. The boats hardly moving, the RC opted to shorten the course.Once again it was a duel between Russian skipper Annatoly Loginov on Annapurna and UK’s Yvan Bradbury on Blue Haze, consolidating his overall leadership after three races, and France’sAlain Lathioor on Révolte. More races, and discards, will be needed to define the final scoreboard, but it looks like only the top fifteen boats can aspire to the podium.

The 5.5 and the Tofinou could also race one round today. It was Switzerland Andreas Dyhk Petersen on Otto to get the 5.5 series’ first win, while Régates Royales’ veteran  Edward Fort on Pippaalso scored a victory in the Tofinou 9.5 class.