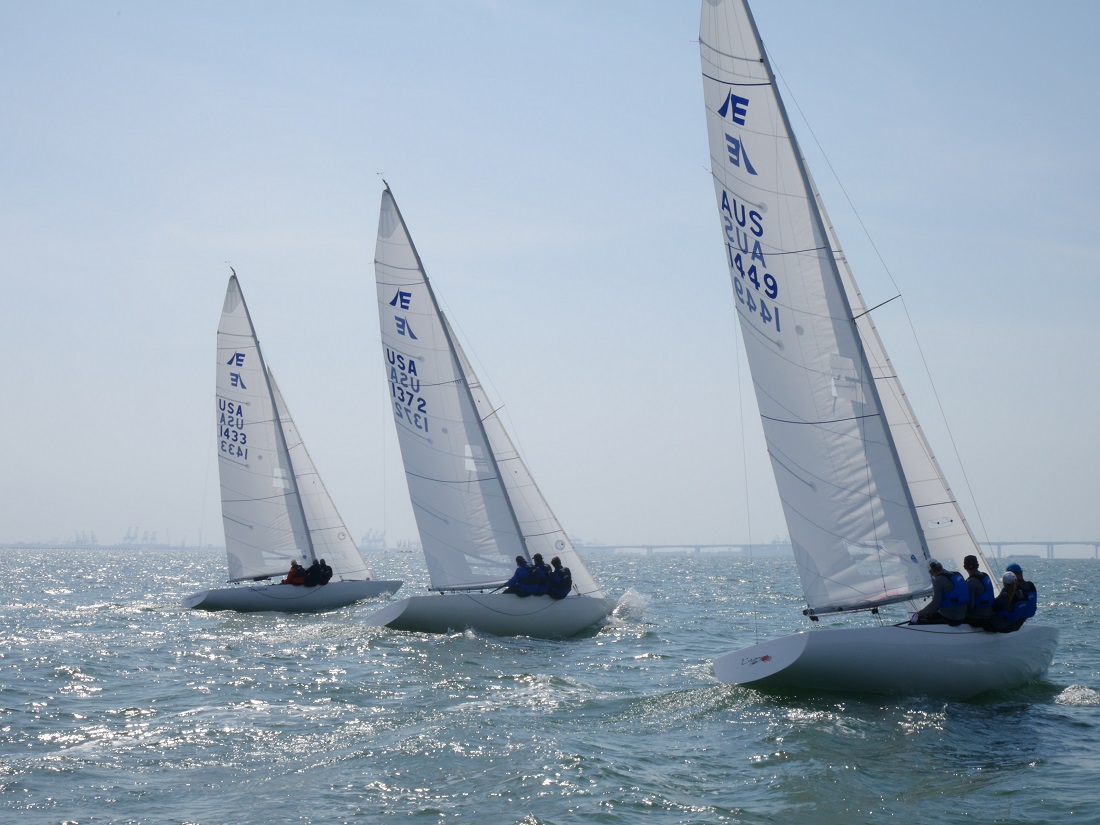 Martin Hill's Lisa Rose (right) taking on the Americans among others.

Australia’s Martin Hill and crew on ‘Lisa Rose’ have opened their bid to win the Etchells World Championship, starting in San Francisco tomorrow local time, with an encouraging fifth overall at the Pre-Worlds.

“We had a good result in the Pre-Worlds with a win in Race 2 to finish fifth overall,” Hill said of the event hosted by the San Francisco Yacht Club.

Hill, who is representing the Royal Sydney Yacht Squadron (RSYS) added: “We have a competitive boat, and with our coach Bob ‘Uncle’ Wilmot arrived here, we hope to continue our improvement in this star-studded class,” he ended.

The first day of the Worlds is looming large and crew member David Chapman concedes: “It’s been a busy few weeks here in San Francisco.”

“One thing has become clear – we don't have a clear favourite for the world title!

“GT (Graeme Taylor from Melbourne who is crewed by James Mayo and Steve Jarvin) will be Oz's best chance for the win, in my opinion. But as we know, anything can happen in a long series,” he says of the scheduled nine races, starting with two on the opening day.

“Team Lisa has been getting stronger and stronger as we have been pushed by the best. We’re looking forward to a great series.

“Forecast is looking like classic S Francisco conditions,” said Chapman of the hottest month of the year when breeze tends to be on the light side.

Chapman, whose family, including dad Richard ‘Blue’ (RSYS Commodore and former skiff sailor) and mum Rowena (who is also their coach’s sister) have been in town to support the Lisa Rose team through the Pre-Worlds, but left for Sydney today.

While Hill’s one-design victories in various classes have been well documented these past two decades, Chapman’s genes explain his sailing talent.

Mum Rowena, or Rene, as she is known, is from the famous Wilmot sailing family. Her brothers are Olympians Jamie and Bob (the team’s coach) who both continue to sail and win at the grand prix level, while Jamie’s son, Nathan, won Gold in the Men’s 470 at the 2008 Beijing Olympics.

Rene’s sister is Jeanine Treharne, a world, South Pacific and NSW champion across multiple classes who represented Australia in the 420 at the first IYRU Women's Sailing World Championships with Rene, who represented three times.

Ironically, the two will sail against each other at the Etchells Worlds, where Murray, who won the 1984 Worlds, will be crewed by Richie Allanson and Euan McNicol.

Palfrey will also sail against Cameron Miles and James Mayo whom he won the 1999 Etchells Worlds with and also campaigned with for the Soling spot at the 2000 Olympics. Dog has also coached clients to major wins, as early as 2005 when he helped Richard Perini’s crew to their Farr 40 Worlds win.

Sasha Ryan is a young lady with a big sailing future, claiming wins and other podium places as skipper of a 470, which she is currently campaigning for the 2020 Olympics.  He sister Jaimie represented at the Rio Olympics as 470 crew, as did brother Will, the Silver medallist and reigning world champion with skipper Mat Belcher.

Fifty-one crews from around the world are contesting the Etchells Worlds among them a number of one-design world champions, Olympians, ocean racers and America’s Cup sailors.