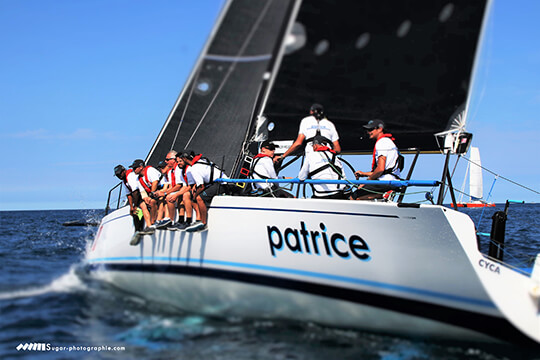 New Zealand’s red-hulled Miss Scarlet is charging north along the eastern side of the South Pacific territory of New Caledonia and holding a 10 nautical mile gap over their fellow Kiwis on Ran Tan in the 654 nautical mile Groupama Race.

The premier yachting event for the region began on Sunday June 17 for the mixed fleet of 23 sailing for French New Caledonia, Australia and New Zealand.

Co-owner of the IRC52 Scarlet, Graeme Wilson, said early Monday morning, “Everyone’s enjoying the race and we look forward to more good weather. Last night the stars were out and the breeze was up and down. Currently we have 10-12 knots from 070 and we are enjoying sailing under A2 spinnaker. Our strategy today is to continue running until we can make our lay-line to the mark at the top of the island.”

It’s not just the paint job and waterline length giving the others the slip. An IRC win in the Auckland Noumea feeder race and decorated French yachtsman Franck Cammas assisting with strategy strengthens their line honours and handicap ambitions immensely.

Michael Bellingham, navigator of the first Australian boat, Tony Kirby’s Ker 46 Patrice sailing for the Cruising Yacht Club of Australia and currently third in the fleet, said during their morning report, “We are now in a light easterly doing 8 or 9 knots and conditions are excellent, the sea is less than half a metre. Our strategy today is to go fast and catch the guys in front of us.”

With the first third of the race close to being completed for the bigger boats, they are also hogging the top IRC handicap places – Patrice and the beautiful cruiser/racer Carreras, Gerry Cantwell’s Marten 49 (AUS) are first and second overall.

Based on their current speed-over-ground, the monohull line honours trophy will be decided early afternoon on Wednesday June 20.

Guilty Pleasure Speed Machine MSC is the only retirement, the skipper Renaud Gerardin advising the race committee on Monday morning that they are returning to Noumea due to illness on board.