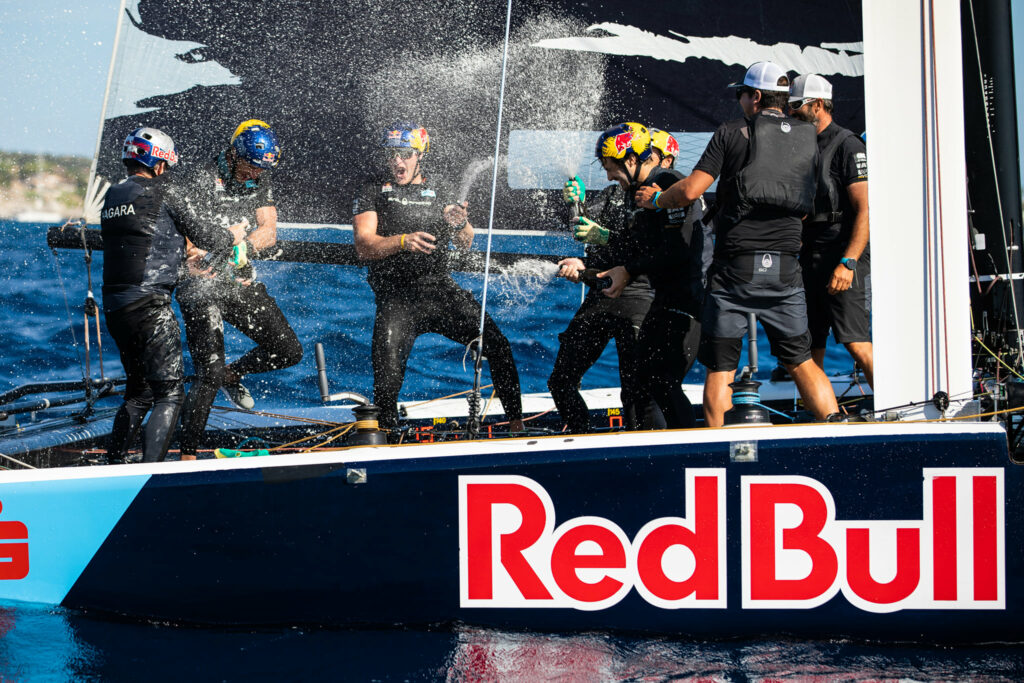 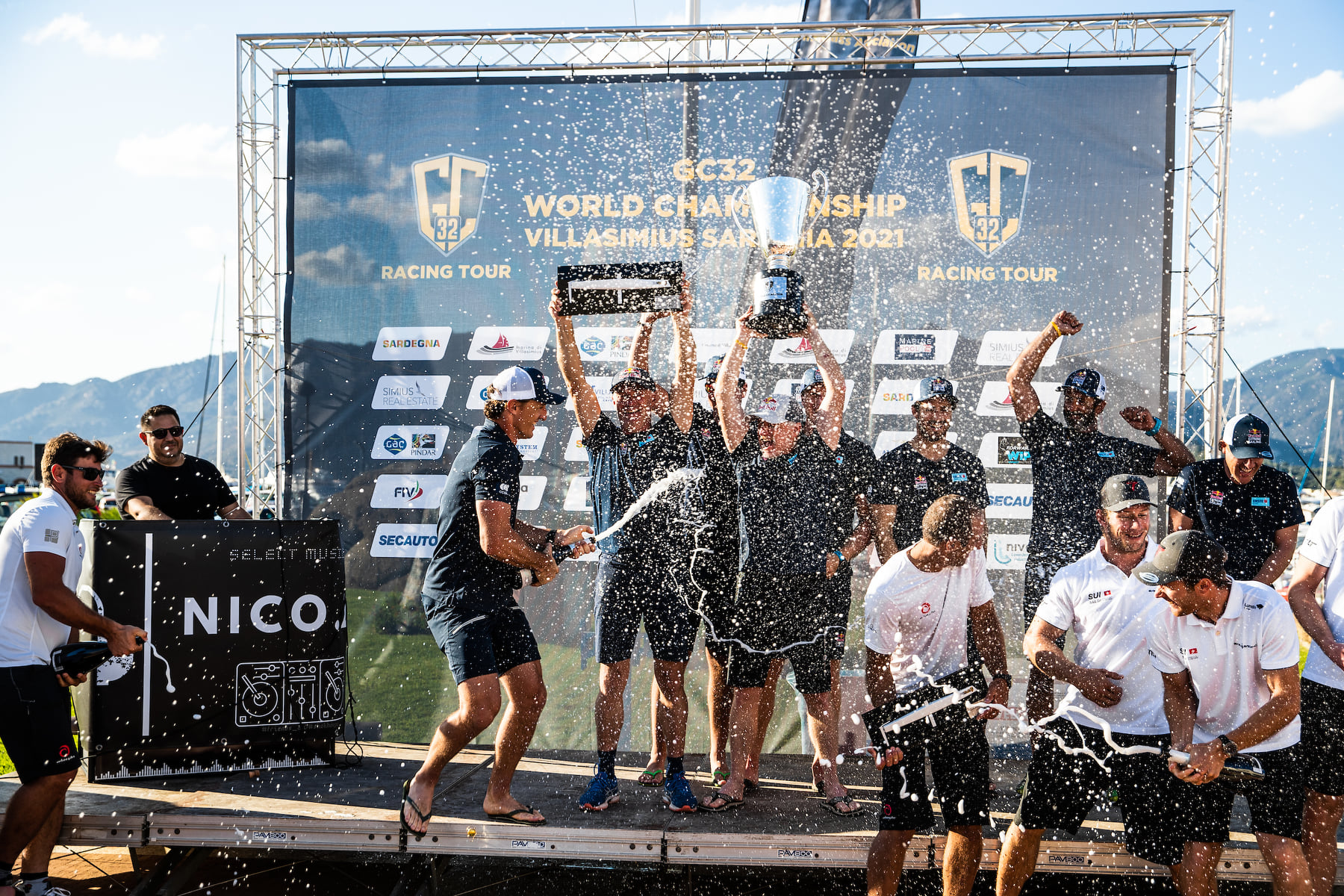 This is the first event that Red Bull Sailing Team have won on this year's tour. Pic - GC32 Racing Tour / Sailing Energy 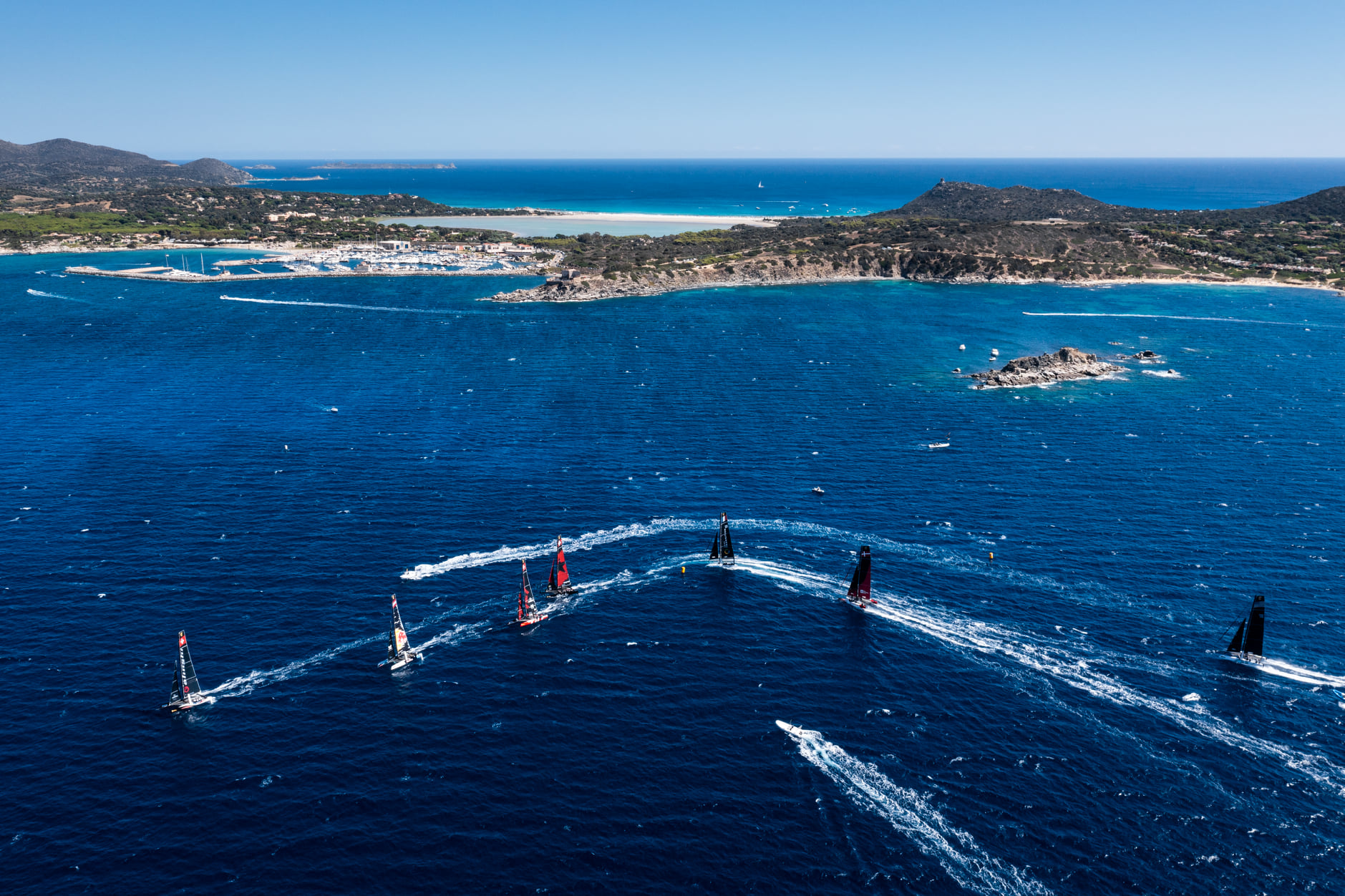 Sport is all about emotions, highs and lows, and nowhere was this more evident than at the conclusion of the third GC32 World Championship held in Villasimius.

The Sardinian resort town saved its best conditions to last today, with flat water, a cloudless blue sky and a warm wind gusting into the high teens enabling five races to be held with reaching starts.

Roman Hagara and Hans-Peter Steinacher on Red Bull Sailing Team started the day with a six-point lead. However with five races scheduled, in stronger conditions and reaching starts, the field was still open. Especially dangerous looking were the defending World Champions, Alinghi, who hadn’t sailed their best on Saturday and left Marina di Villasimius with things to prove.

And so they did. The Swiss two-time America’s Cup winners were on fire, unable to put a foot wrong in the bigger conditions, posting a 1-1-2-1 score. Red Bull Sailing Team, while racing well, were unable to match this and started the final race three points astern of the Swiss champions.

As Alinghi led away she seemed to have the championship sewn up until the unimaginable happened and going into the leeward gate for the final time she suffered a breakage dropping her down the fleet.

Meanwhile positions were changing rapidly in the rest of the fleet. Ultimately Red Bull Sailing Team finished fourth as Alinghi limped home in seventh. This left her tied on points with Red Bull Sailing Team, who were crowned the 2021 GC32 World Championship by virtue of their place in the final race.

As Hans-Peter Steinacher said: “It was close. The Alinghi guys had a really good day. We tried everything and in the end we were really lucky, but this is a technical sport, it is part of the game and things like this happen.

“But we are very happy. Especially in these big boat series, a World Championship title is something really good. And racing these guys…Alinghi has been so strong in these last years. But yesterday I think we had our best day in the last 15 years…”

Skipper Roman Hagara said: “Definitely it is one of the biggest wins since the Olympics for sure. It is a great achievement against all these teams and it was really tight the whole week. The team did a great job. We fought until the end and here we are.”

The Austrian duo are double Olympic Champions, but they also won two World Championships in the Tornado catamaran, their last in Vallensbæk, Denmark in 1999. Both put their success down to having the same crew for the last two seasons: Australians Rhys Mara and Mark Spearman and Swedish powerhouse Julius Hallström.

“When you stick with the same crew – as Alinghi does – your level goes up, up,” said Steinacher.

The Alinghi team’s disappointment was profound. As helmsman Arnaud Psarogfaghis said: “For sure it is disappointing to lose a regatta on the last downwind. Red Bull deserved the win. They sailed really well the whole week while we missed a few points. We sailed really well today, we have a good team and we are really fast. Everything was going the direction… I am really happy for Roman…”

Astern there was a Swiss fight for the final step of the podium between Christian Zuerrer’s Black Star Sailing Team and Sébastien Schneiter’s young crew on Team Tilt. Sadly for Zuerrer’s team, that had been so strongly on the ascent earlier in the event, a series of mid-fleet finishes on the final day of racing saw them knocked off the podium by a point.

Schneiter, whose team won the first GC32 World Championship in Riva del Garda in 2018, sailed exceptionally but admitted that it was their first time doing reaching starts in two years.

“We are pretty pleased to make it on the podium and actually when you look at our points compared with the top boats we are not that far behind,” said Schneiter. “We sailed reasonably well, we did some mistakes, but it was hard to avoid them and we showed some really strong signs. I am happy.”

Erik Maris and his Zoulou team had a splendid regatta. Up against America’s Cup winners and Olympic champions, the Paris-based amateur owner-driver led this GC32 World Championship both after day one and day two. After a lacklustre Saturday, he rounded off the event by winning the final race and in sixth place overall, just two astern of Team Rockwool Racing.

Of the event Maris said: “It was fantastic. Conditions were perfect – sunny, warm, windy. We are sorry for Alinghi for the breakage in the last race, but we are also very happy for Red Bull. It was a great championship, a great place to be, great spirit between the boats.”

Especially today, Zoulou enjoyed good sparing with the other contender for the Owner-Driver Championship, American Jason Carroll on Argo.

Christian Scherrer, GC32 Racing Tour Manager summed up: “I am delighted with our third GC32 World Championship, here in Villasimius. The sailing conditions were outstanding, especially over the last two days. It is just a great place for sailing.”

“I would like to thank our partners, the Sardinia Region and the authorities from Villasimius, the local sponsors, and especially the Marina di Villasimius and Lega Navale Italiana Sezione di Villasimius and all the helpers and volunteers who have contributed to making this event possible.”