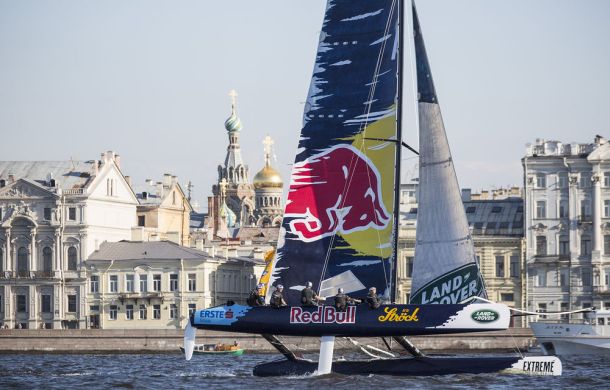 Russia delivered a glittering opening to the Extreme Sailing Series™ Act 6, Saint Petersburg presented by SAP, with Red Bull Sailing Team staking an early claim, winning the day against the golden backdrop of the Peter and Paul Fortress.

Back in the driving seat after a break from the helm and his skipper duties due to injury, double Olympic gold medallist Roman Hagara was back on fighting form. The Austrian showed impressive consistency, posting six podium results from the seven races sailed during a competitive day’s sailing, that saw five different race winners emerge.

Hagara commented on his return: “Sometimes it’s hard to see what you’re doing wrong when it is right in front of you. It certainly helped taking a step away and seeing it from the outside. We know the water in Saint Petersburg from last year, along with the secret spots and where you should stick to in this wind direction. If the team can be well prepared and perform as they did today it will show in our results.”

Graced by unbroken sunshine, 10 knots of sea breeze and two knots of tide, the Austrian team mastered the River Neva conditions to finish the day on 58 points, topping the overnight leaderboard and holding a valuable six-point buffer over The Wave, Muscat in second place skippered by Britain’s Leigh McMillan.

A surprise presence on the overnight podium comes in the form of Lino Sonego Team Italia. Feeling the benefit of their mid-season crew change, new skipper Enrico Zennaro and helm Arnaud Psarofaghis, who competed in the 2014 Extreme Sailing Series with Realteam, led the Italians to their highest scoring day so far this season. With one race win and two seconds they finished the day in third.

In the hunt for the podium, home team Gazprom Team Russia and SAP Extreme Sailing Team lead the chasing pack, just three points adrift and tied on 46 points each. But as Gazprom Team Russia’s helm Phil Robertson explained, the crews will really have to focus on consistency this week if they hope to stay in touch with the podium: “We had a really good start and got our head around the conditions quickly but we lost our way later in the day. The course is really hard, it’s narrow and you are battling a lot of current. The other teams looked like they were struggling too”.

Of the remaining fleet Oman Air and GAC Pindar both took convincing race wins after well-positioned starts, but struggled with consistency in the strong tide to finish the day in sixth and seventh respectively. Unfortunately for Team Turx in the fifth race of the day the ambitious crew, in an attempt to get out of the tide, cut too close to the shore and run aground in the shallows of the beach on the finish line – adding a costly zero points to their score line for not finishing the race.

Racing continues tomorrow from 14.30 (GMT+3) with live coverage of the racing from 16.00 (GMT+3) available at www.extremesailingseries.com/live.