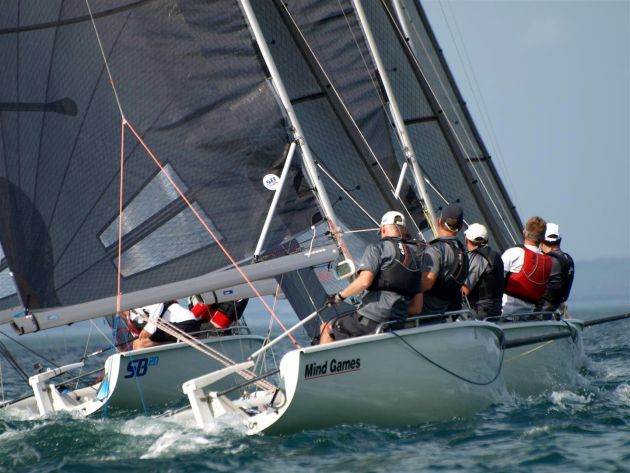 A fleet of more than 40 SB20 one-design sports boats, including several mainland crews, is expected to contest the Banjo’s Crown Series Bellerive Regatta later this month.

The Banjo’s Crown Series is one of the significant regattas on the Derwent in the lead-up to the SB20 Worlds in Hobart in January 2018.

The Crown Series will be sailed over the weekend of 18-19 February with the keelboat divisions also contesting a twilight race on the evening of Friday, 17 February, joined on Saturday and Sunday by SB20s, trailable yachts and off-the-beach dinghies and catamarans.

Now in its 14th year, the Crown Series is Tasmania’s biggest regatta for keelboats, sports boats and off-the-beach racing dinghies and catamarans.

“I am confident most of the 41 SB20s in the Hobart fleet will contest the Crown Series along with four crews from the mainland which will include Victorian Chris Dare who finished fourth in the Worlds in Cascais, Portugal, last year,” Brain said.

“Local yachtsman Michael Cooper, who finished one place behind Dare at the worlds, will also be competing along with top Hobart SB20 sailors Nick Roger, Paul Burnell, Rob Gough and Fraser Read, just to mention a few. Rod Jones will also be down from Queensland again.

“Any one of 10 to 15 skippers could be the winner at the Crown Series and we expect similar competition at our State championships in March,” the defending champion added.

The two regattas will give big fleet practice for the Tasmanian crews going to England later in the year to contest the 2017 SB20 worlds at Cowes on the Isle of Wight.