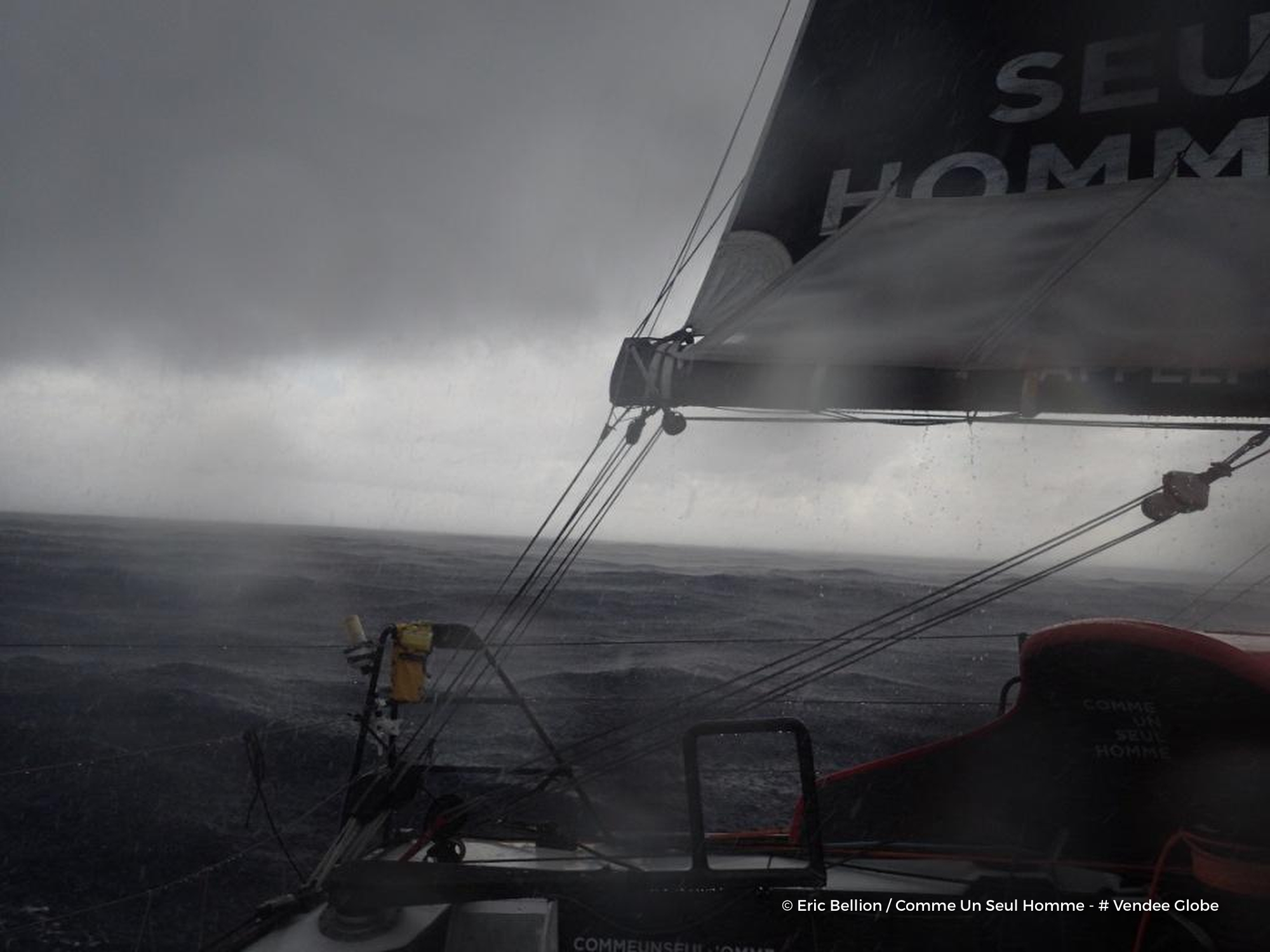 Dark side of the moon for the Vendee skippers. Photo Eric Bellion.

The Hungarian solo skipper Nandor Fa sails into the final weekend of his Vendée Globe with his mood lifted after what he admits have been some of the darkest days of his solo race around the world.

To have got to within 2000 or so miles of the finish line but become trapped and increasingly frustrated by the light winds of the Azores high pressure system crashed the mood of the hugely experienced Fa, not simply because of the persistence of the light and variable winds but because the northern fringe of the high seemed to climb with him each day. And until last night, each forecast for the last three days promised an escape which never materialised. Factor in the tiredness and mental fatigue felt after nearly 90 days at sea and the situation was increasingly intolerable to the 62 year old who thrives on tough weather and going fast. Fa wrote today that the last few days have seen some of his darkest moods of the race so far but his spirit, the Spirit of Hungary, has risen significantly today as he has accelerated. With less than 1600 miles to go he was making 12-14kts this afternoon and should be able to achieve solid average speeds over Saturday and Sunday. The last four days of his race will be complicated and he will use all his years of experience and discipline to close the miles from the Azores carefully, knowing that shipping, fishing boats and forecast strong winds to 35-40kts at times are hazards he has to stay on top of. The finish line beckons and he is now expected Tuesday afternoon, some time after 1400hrs according to current weather models.

Meantime the French Atlantic coast is being hit by gales which today closed the race village. With storm force winds due tomorrow Saturday, Fa can take comfort he was not trying to finish this weekend. He has nearly 800 miles in hand over ninth placed Eric Bellion and more than 900 miles over Conrad Colman. Kiwi skipper Colman continues to hold on to the NE'ly trade winds while Bellion – 237 miles ahead – is slowed now by the Azores High.

In 13th place Alan Roura (La Fabrique) crossed the Equator at 1225hrs UTC after 89 days and 23 minutes of racing. That leaves only five skippers still in the South Atlantic. The duel between Didac Costa and Romain Attanasio still sees only 14 miles between the Spanish and French rivals. Attanasio told Les Sables d'Olonne Race HQ today:

“I am still going along with the wind on the beam in the trade winds. I wasn't too happy with my position, as I had two or three hours going round in circles in the final squall. Didac was quicker than me. But a lot can happen before the finish and I'm trying not to push too hard, as upwind, we're slamming, so it's more a question of finding the right compromise. It would be stupid to break something now. I have two reefs in as otherwise the boat would be over on her side with the stanchions in the water. I'm pleased for Louis, who had a great race. But it was the same when the leaders finished. I was pleased for them. I'm a long way behind them. I'm taking it one step at a time. It was hard off Brazil. I'm around 900 miles from the Equator. I can see that the trade winds in the Northern Hemisphere are strong, so we should be fast, but it's not going to be comfortable. The skies are clouding over after two fine days. That's quite welcome as it's quite hot. I sweat when I'm at the nav desk and it's not easy taking a shower in these conditions. I'm watching the series Outlander.”

Pieter Heerema should get into the regular winds generated on the west side of the Saint Helena high tomorrow after a spell in Doldrums-like conditions south east of Rio. The Dutch skipper of No Way Back confirmed today: “At one moment, it's really blowing and the boat is doing more than fifteen knots. You take away a bit of sail and three minutes later, it's down to next to nothing. So you need to be on top of it. I try to keep the boat moving, but sometimes, she's really overpowered. There are a lot of thunderclouds. Last night I had lightning on the horizon. Beautiful to see, but I'd rather not have it. So it's sort of Pre-Doldrums. I'm at 26-27°S. So I have a way to go before I'm out of this patch. I'd say 250-300 miles before it gets really steady. When it was coming up, this developed right in front of me. But at least I'm not going to be unlucky, as at least I'm moving here. A few days ago, I was in the cold and now it's 35°. With the heat from the engine, you can't move, as you break into a sweat like Niagara Falls. But it's certainly doable now. As long as I keep moving, it will be fine. I send an e-mail home every day, but I feel really like I have to have something to say. At the moment one day is like another. There's a lot of the same. So then, I don't send e-mails. I've caught 250 miles up from the boats in front, but now they're extending again. I feel that when I'm in the trade winds, I may be able to do something, but it won't be much, maybe 30 or 40 miles a day. I really need a different weather system. It's possible as there is still a long way to go, but they are looking at the same weather information and we all have the same routing.”