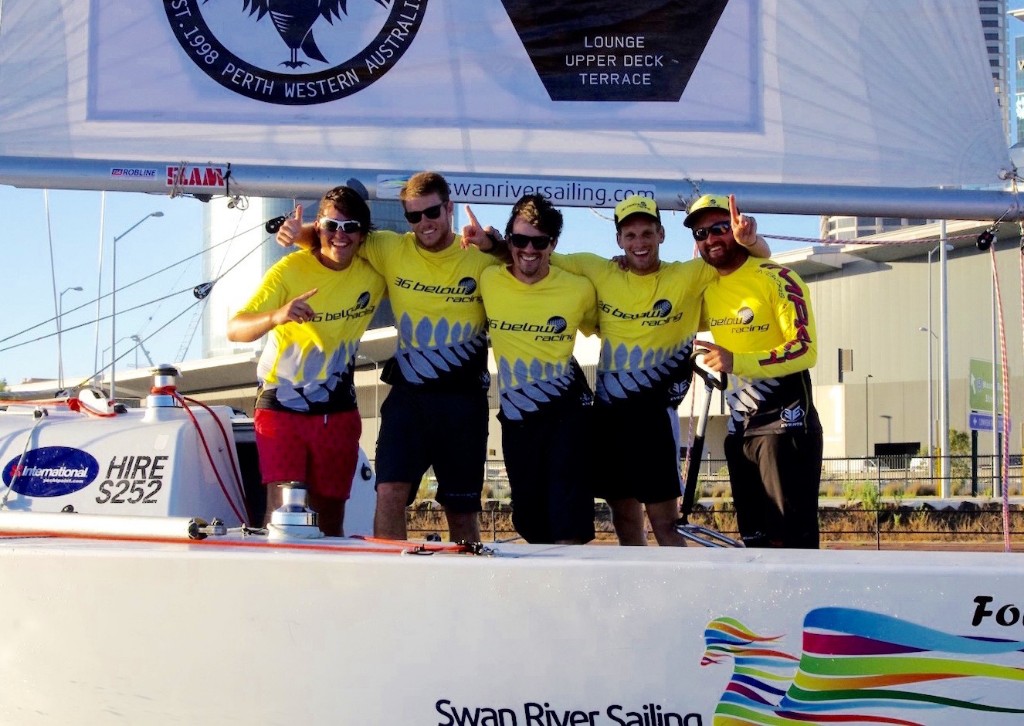 The 15th Warren Jones International Youth Regatta came to a conclusion in perfect sailing conditions late on Friday afternoon as the sun was setting on Perth Waters in front of the City of Perth skyline.

Having topped the leaderboard in the round robins, Chris Steele (36 Below Racing) of Royal New Zealand Yacht Squadron, had the right to pick his opponent for the semis and he chose fellow compatriot, George Anyon also from the RNZYS, in a best of three semi-final.

In the first semi-final George Anyon came out fighting at the starts inflicting a couple of penalty’s on the more senior match racer. However a few boat handling errors allowed Steele to off load them and get back in the match. Steele took the first match by three boat lengths but Anyon came back in the second to even up the score. Despite again forcing Steele into a couple of errors at the start, Anyon’s crew work at the kite drops and a couple of sloppy tacks, let Steele through and there was no way back. Steele went on to win the final match by five boat lengths.

The second semi was a fiery encounter between the two Perth based teams, Sam Gilmour from Royal Freshwater Bay Yacht Club and Matt Jerwood from South of Perth Yacht Club. Gilmour led away from the start line with Jerwood playing catch up in both matches. Jerwood was judged to have touched a mark at the final top mark rounding in the second lap, which ruined any chance of a comeback on the final leg.

A disappointed Jerwood did manage to finish his regatta with two comfortable wins against Anyon’s team in the Petit-Final taking third place in the regatta.

George Anyon was judged earlier in the week to be the best improver throughout the regatta and should be proud of his performance, competing for the first time on these waters.

Later in the afternoon the sea breeze started to puff down the Swan River and make for a fine finale with all the ingredients you would expect from a classic match race final. The best of 5 final would be a repeat of the 2016 final between the rivals Chris Steele from New Zealand and Sam Gilmour of Australia.

In match 1 Steele managed to inflict a penalty by squeezing Gilmour out at the start but Gilmour chased hard upwind to close the gap. The boat handling skills on both boats was exemplary and the rowdy spectator fleet was in for a treat. Steele led back to the gate but the following upwind leg turned into a classic tacking dual. The slightest tacking error by Steele offered Gilmour the chance to pounce and he did, taking the lead. However he only had a lead of about 3 boat lengths and run out of runway to offset the penalty, handing the win to Steele.

Match 2 and Gilmour started just to leeward of Steele and got into better pressure to lead upwind. He rounded clear and with a better kite hoist, opened up a 2-3 boat length lead. At the gate both teams split gybes and Gilmour managed to gain again. Gilmour levelled the finale at one a piece.

The third match will go down as one of the closest and most entertaining in the 15 years of the Warren Jones Regatta. Steele got another penalty on Gilmour in the pre-start but failed to keep clear just after the start and was given a red flag (penalty which has to be taken immediately). Gilmour sailed away to a handsome lead upwind but still had to offload his own penalty. He chose to do so near Ainslie bank before rounding the windward mark. It appeared to work, leading Steele back downwind to the gate. He maintained the lead looking to go match point up on Steele when a slight error in judgement luffing Steele early as they approached the finish line, allowed the kiwi to get on the Australians wind and nudge past to win by the width of a grass blade.

Match point in the epic battle of the ditch. In the fourth match in marginally stronger breeze, Steele got a slightly better start at the pin, stretching into a comfortable lead at the top mark. Despite all the tacks and attacking gybes, Gilmour just couldn’t get close enough to take Steele’s breeze and the kiwi glided over the finish line to take the match and revenge for losing the final against Sam Gilmour in last years final.

An ecstatic Chris Steele thanked his crew as he crossed the finish line.

“Top effort from the lads this week, James Delegat on the bow, youngest Sydney to Hobart race winner at age 18, Jayden Stevens in the pit, one of my close mates from Sydney, Stew Dodson who needs no introduction, he races on the Extreme circuit, TP52 Super Series and is World Match Race Tour champion with Phil Robertson, its been awesome to have him trimming this week, and my best buddy Ashlen Rooklyn here on the main, back in match racing after a couple of years off.”

“I am stoked, the finals against Sam is always going to be tough and we were anticipating that sort of show down all week. With Matt Jerwood, George Anyon and the likes of Harry Price in the field, you can never count your chickens too early so we are pretty stoked to win it, it means a lot and I am happy to come back and win it in my final year.”

“The best thing about the type of racing here is it is so tight with all the boundaries and the exclusion zones, so pretty happy with the venue and I think it would be awesome if they can continue to do that here in years to come.”

Chris Steele was a worthy winner of the title, displaying a masterful performance and remains an inspiration to his fellow competitors and members of the RNZYS performance programme, for which he acts as a mentor.