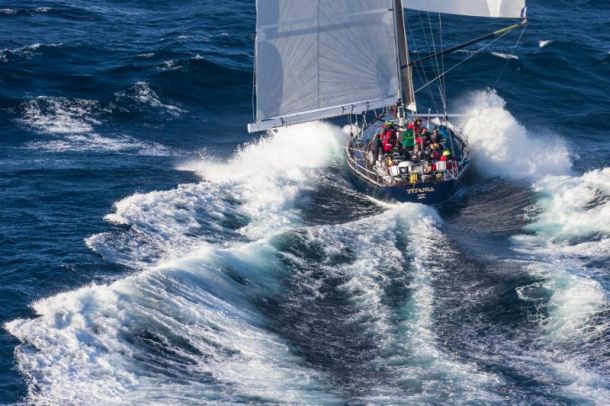 All the way from Australia for the race: Richard and Cathy Dobbs' Swan 68

13/08/2015
Marinas around the Solent are already bristling with activity in the build-up to this Sunday's start of the world's largest offshore yacht race, the Royal Ocean Racing Club's Rolex Fastnet Race.
A record-sized fleet, at present standing at 372 boats (up from 335 in 2013), is entered in this 90th anniversary event. On Sunday this will be split between seven starts, setting off west down the Solent from the Royal Yacht Squadron line in Cowes. First away at 1200 BST will be the 'non-IRC' classes – the Multihulls, led by the world's fastest offshore racing yacht, Dona Bertarelli and Yann Guichard's 40m trimaran, Spindrift 2. They will be followed 10 minutes later by the Vendée Globe heroes in the IMOCA Ocean Masters class, plus the Class40s and Figaros. After these comes the huge IRC fleet, culminating in the largest monohulls, such as Jim Clark and Kristy Hinze Clark's 100ft Comanche and George David's Rambler 88, among the last starters at 1340 BST.
Already boats and sailors are gathering from the four corners of the globe ready for the RORC's biennial 'classic' 600 mile offshore race. Among the yachts, three – Comanche, Maximilian Klink's Botin Partners 65, Caro, and Richard and Cathy Dobbs' Swan 68, Titiana – have made the trip from Australia where at the end of December they competed in the Fastnet's antipodean equivalent, the Rolex Sydney Hobart Yacht Race.
Similarly many of the world's top sailors have been descending on the Solent from across the globe including skipper of Rambler 88, four time America's Cup winner Brad Butterworth and his AC main sheet trimmer Warwick Fleury, who is racing on Comanche. Also taking part are a proliferation of Volvo Ocean Race legends such as Kiwi multiple winners Brad Jackson and Tony Mutter, who are sailing on Rambler and Comanche respectively.
Woman power
A reason for the growth in the Rolex Fastnet Race is due to the increase in popularity in several key areas of the race, one being women's participation.
This year's race will feature seven all-female crews and at least 10 more yachts with female skippers. The former group includes the Beneteau 40.7 Hot Stuff from the women's sailing school Girls For Sail led by Annie O'Sullivan, while a Tall Ships Youth Trust Challenger 72, skippered by Elizabeth Terrell, will have a crew of girl guides ranging in age from 20 to 57 years.
But the highest profile will certainly be Team SCA. Barely missing a beat from the end of their lap of the planet, the all-women's Volvo Ocean Race entry will be back competing on Sunday with a similar crew, including British solo round the world sailor Dee Caffari, but this time led by Dutch Olympian Carolijn Brouwer. In fact to continue progress with their training they will have two men on board – both former Volvo Ocean Race competitors in Aksel Magdahl and Martin Stromberg – as coaches.
Meanwhile the team's VOR skipper Sam Davies has temporarily jumped ship and will be competing in the Fastnet Race, but in the IMOCA Ocean Masters class, sailing two handed with fellow Vendée Globe skipper, France's Tanguy de Lamotte on his Initiatives Coeur.
Currently Davies is supposed to be 'on holiday', recovering from the round the world race and resuming her maternal duties. But the lure of the Rolex Fastnet Race, she says, has been too great: “It is a race that means a lot to me, because I am British – I love that coast, mainly because I raced there so much in the Figaro.”
For Sam this race also represents a first opportunity to get in some training time with de LaMotte, with whom she will be racing two handed in this autumn's Transat Jacques Vabre. “Tanguy will be doing everything and will be telling me what to do! After three years of sailing in the Volvo where you have two people to do everything, it will be a bit of a shock to get back into doublehanded, but ut this will be a perfect way to switch.”
Initiatives Coeur will of course be up against Team SCA and Sam says she is keeping her fingers crossed for reaching/downwind conditions so that she might have a chance of beating her team mates. In the 2013 Rolex Fastnet Race, the IMOCA Ocean Masters leaders finished at the same time as the VO70s, including Team SCA.
As to whether Team SCA has been responsible for getting more women into sailing, and possibly for there being more women competing in this year's Rolex Fastnet Race, it is hard to quantify, but Sam says that she believes their Volvo Ocean Race campaign, and all the positive media it generated, must certainly have had a beneficial effect.
– James Boyd