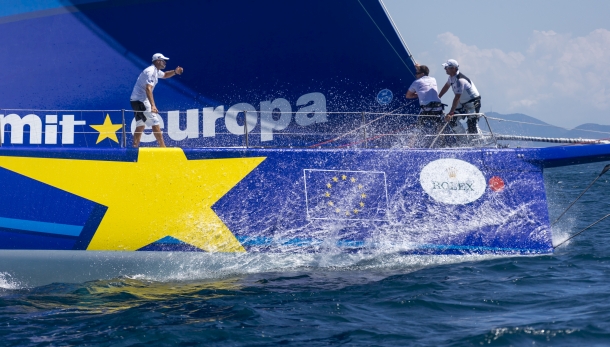 Following the conclusion of three days of quality inshore racing on the Côte d'Azur, the focus at the 2015 Giraglia Rolex Cup turns to tomorrow’s 243-nm offshore race start.

Running from Saint-Tropez to Genoa, the offshore race is the Mediterranean’s oldest and is set to welcome a record fleet of near 250 yachts, a true mark of the event’s popularity and allure.

The fleet includes yachts from over 20 countries, ranging from 30-100 ft, comprising fully professional crews to those sailing single and double-handed. In addition to the strong international contingent, a large proportion of the fleet is, as per tradition, made up of Corinthian French and Italian crews, with the competition noted for its spirit of friendship and camaraderie – qualities which came to the fore during yesterday’s Rolex crew party.

Record not forecast
While a record number of entrants are set to start the offshore race (surpassing the total of 220 in 2010), hopes are lukewarm regarding the chances of witnessing a new race record. Igor Simčič’s 100-ft Maxi Esimit Europa 2 starts as the favourite for line honours although the current weather forecast suggests the record Esimit herself set in 2012 of 14 hours, 56 minutes will not be threatened.

Caol Ila R was a star performer in the inshore series although the crew are cautious about their chances for the offshore race. “I don’t think it’s going to be a record breaking race,” confirmed afterguard Gordon Maguire. “The forecast has been consistently showing light weather. This area of the Mediterranean is classically unpredictable. We are preparing for a light to moderate race. The computer is currently predicting a 28-hour race.”

“The race is kind of a sprint,” continues Maguire. “Our main target is to sail from start to finish without parking. It’s probably looking like a smaller boat race as there is a chance of a fill in from the southwest which will help them quite dramatically.” Maguire – two-time winner of the Rolex Sydney Hobart Yacht Race – admits this is all-consuming race. “While it is shorter than a 600-nm offshore race, it’s more intense. During the Rolex Sydney Hobart you have a work/rest ratio of 50/50, four hours on and four hours off. Here, it’s more like 66% work, 33% rest. Every opportunity in this race is an opportunity to win.”

“If it's a little windier (than predicted) it will suit us,” admits Jethou’s world-renowned professional sailor Brad Butterworth. “It will be a case of getting ahead and staying ahead. The owner (Sir Peter Ogden) has made a big commitment with the improvements made to the boat over the winter – a new keel, new rig and new sails. He’d love to win a race like this.” Like Maguire, Butterworth was forecasting arrival in Genoa in the region of 30 hours after the race start.

For others, Genoa does not simply mark a point of arrival but a return home. A case in point is the Genovese crew on Adriano Calvini’s 61-ft Itacentodue, a perennial competitor at the race. “Each year we try to show improvements in terms of boat handling and manoeuvres,” admits Adriano’s son Giovanni. “The arrival in Genoa for us is very special, it’s our city. Even if sometimes the approach to Genoa can be tough when you hit a bit of calm weather!”

The potential of a smaller boat emerging as the overall handicap winner on IRC ensures a competitive race throughout the fleet and interest until the very end. A host of recent winners have come from yachts in the 30-45 ft range. Two crews to taste success at the race in recent years include Laurent Camprubi’s 44-ft Alizée, winner in 2013, and Dominique Heyraud’s 37-ft Foxy Lady two years earlier. For both French skippers, at the helm again in 2015, the Giraglia Rolex Cup was the pinnacle of their sailing careers. Winning once was an amazing feat, triumphing twice at the Giraglia Rolex Cup, organized by the Yacht Club Italiano, would elevate either crew to legendary status.

Impressive performances
In the lightest conditions of the week so far, the Giraglia Rolex Cup inshore racing series concluded earlier today. For the third day running Esimit Europa 2 was the fastest yacht on the water, completing today’s 30-nm course in 2 hours, 52 minutes.