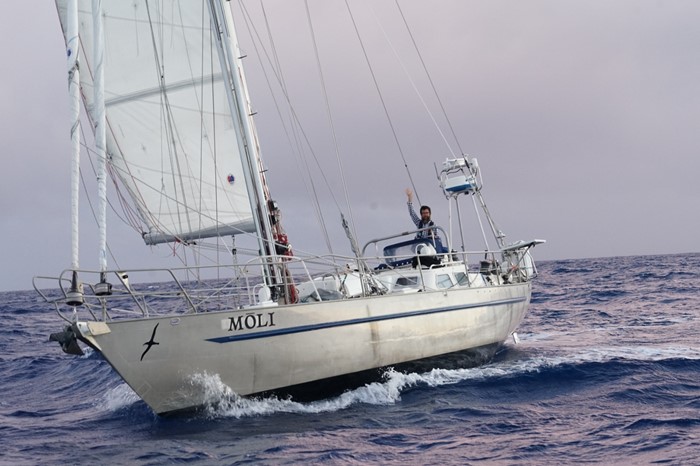 OCC member Randall Reeves and SV Moli will have completed a circumnavigation of both Antarctica and the Americas in one season.

Randall Reeves departed from San Francisco just over one year ago on what he called the Figure 8 Voyage. This solo journey would take him around the Antarctic through the Southern Ocean, then up the coast of the Americas and through the Northwest Passage to return to San Francisco. This has never been done before.

Randall will arrive in Northern California in plenty of time to make it to the Golden Gate Bridge for his return on the 19th of October. He’s going to gently potter down the coast and get prepared for his return to civilization so the official return date of October 19th is firm, weather permitting of course.

We’ll be posting the schedule for the weekend by mid next week along with both the Saturday shenanigans and Sunday reception.

We’re still looking for folks who are planning on sailing (or motoring) out to Mile Rock to welcome Randall and Moli and who might have space for those who’d like to go out to welcome him. Please send a note to figure8voyage@gmail.com if you have space with the number of people you can accommodate plus your departing location. For those of you who want to get on a boat – stay tuned. We are coordinating a sign-up sheet.

We're sharing some general plans now as some of the logistics are still being worked out. We're estimating based on tides that Randall will come under the Golden Gate Bridge between noon and 1pm (1300h PST, 1900h GMT) Saturday Oct 19th. If you're going to be on a boat the assumption is that rendezvous point will be close to Mile Rock.

If you're coming to join us on land, we'll be on the seawall in front of Travis Marina. We'll be meeting there around noon. Note – there is tons of parking in the lot behind the marina.

After the “wave under the bridge” portion of the day, we'll be moving to a secondary location to be announced for a champagne toast, media interviews, and all that fun stuff. The location will be updated soon – currently either in Sausalito or Richmond CA.

There will also be a reception on Sunday (in Richmond CA) where we'll have a special event with members of the Ocean Cruising Club. One and all are invited and should include opportunities to tour the boat. We're also excited to announce that past Vice Commodore of the OCC Tony Gooch (former owner of Moli and the first person to circumnavigate the world solo nonstop from the west coast of the Americas) will be on hand for Q&A. One super accomplished sailor is not enough. 🙂

We'll be sending updates along with times, exact locations, and other information as things get clearer.