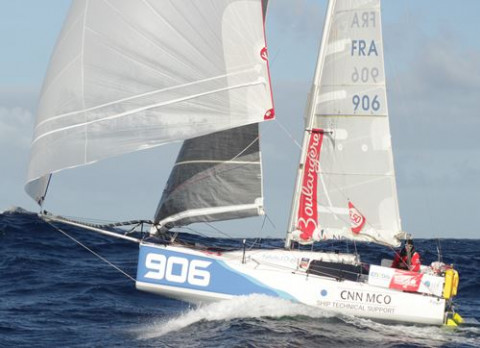 Out on the racetrack this evening, the Mini-Transat La Boulangère fleet stretches from the latitude of Lisbon to Cape Finisterre.

It’s been a very fast and exhilarating day, especially for the sailors further South. The leaders are setting a hellish pace led by François Jambou (prototype) and Félix De Navacelle (production boat).

Though nobody has retired so far, four Mini sailors have been forced to make pit stops. Jean-Baptiste Ternon is back out on the racetrack now and Joe Lacey should follow suit shortly. As for David Kremer, his transom has opened up and he’s stopped off in Baiona. All alone in the Spanish port, he will have to overcome the disappointment and try to quickly work out what his options are.

Equally, Pavel Roubal (No.908 Pogo Dancer-Prokonzulta) from the Czech Republic also now appears to be heading towards the Spanish coast for a potential pit stop.

The sailors in the Mini-Transat La Boulangère 2019 are experiencing their fastest day yet in this first leg, which set out from La Rochelle last Saturday bound for Las Palmas de Gran Canaria.

They should be able to rack up quite a pace tonight in a strong N’ly wind gusting up to 35 knots, and a good swell. As such they’re ticking off the miles before the breeze begins to ease tomorrow, set to become very timid off the Canaries from Friday.

However, first things first. For now, the time is ripe for long surfs under spinnaker and high speed. The atmosphere is wet with lots of time spent at the helm. Any moments of respite must be kept to the bare minimum but when everything’s working well aboard, it’s sure to be one hell of a ride out there!

François Jambou, Axel Tréhin and Tanguy Bouroullec are still leading the way in the prototype fleet. Barring technical issues, they probably won’t leave one other’s sides until the Canaries. Fully powered up, virtually on a run, they’ve been on a SW’ly course today. On top of the need to get the boat making good headway, they must be wondering about the best time to gybe.

In 4th place, the only woman signed up for the prototype category this year, Marie Gendron, is sailing an excellent race ahead of a very scattered fleet. Vincent Lancien, 10th, has been relegated to 80 miles astern of the leader, whilst Nicolas Tobo, 20th, is over 200 miles off the pace.

The game is more open among the production boats in that there are still a great many contenders for the top spots in Las Palmas de Gran Canaria. At the 16:00 UTC position report, Félix de Navacelle was in first place ahead of  Guillaume L’Hostis, the latter having nailed the offshore option around the TSS at Cape Finisterre yesterday.

In the Top 10 we find nine Pogo 3s whose skippers include Julien Letissier, Ambrogio Beccaria, Matthieu Vincent, Sébastien Guého, Benjamin Ferré, Lauris Noslier and Amélie Grassi. One sailor with a production scow bow is holding his own in this mix though, Florian Quenot lying in a very fine 3rd place. Another scow bow is up in 11th place skippered by Paul Cloarec.

Damage for Kremer; Ternon and Lacey to set sail again

A cruel blow for David Kremer. The transom on his prototype Bon Pied Bon Oeil (260) has opened up. David has made the port of Baiona near Vigo where he’s trying to boost his spirits and come up with various solutions that will enable him to get back into the race. Hopefully the name of his boat will have some influence as it translates as ‘fit as a fiddle’.

At 16:00 UTC, Jean-Baptiste Ternon had bid farewell to La Coruña and Briton Joe Lacey was just about to leave Gijón, a fact his two young daughters will doubtless be thrilled about. Jonathan Chodkiewiez is still in La Coruña.

Out on the racetrack, the match racing continues at every stage of the fleet, with everyone finding a fellow racer to pit themselves against. Some of the sailors on the older generation boats are posting some excellent performances, including Kevin Bloch on his 2007 Pogo 2 (No.697), who’s managing to keep up with some of the much more modern Minis.

Jean Bachèlerie is putting in another outstanding effort on the oldest boat in the fleet of production boats (No. 428, launched in 2003), as is Japanese sailor Masa Suzuki (470), Russian Irina Gracheva (579), Frenchman Thomas Gaschignard (539) and Swiss sailor Mathieu Gobet (455) – to name but a few.

These skippers are sailing a fantastic race according to their means. From front to back, the 87 women and men currently braving the Atlantic on the smallest offshore racing boats in the world all deserve recognition.

Accessing the Mini-Transat from… Guadeloupe

Proudly representing Guadeloupe in this Mini-Transat La Boulangère 2019 is 23-year-old Kéni Piperol on boat number 956, Caraïbe Course au Large, a scow-bow Vector 6.50 production boat designed by Etienne Bernard and launched in June 2018. He is currently up into 14th position this evening.

Originally from Morne à l’Eau in Guadeloupe, like many of the sailors in the West Indies he sculpted his talent at the Guadeloupe Grand Large offshore training school run by Luc Coquelin, who has a rich offshore racing background that includes several Route du Rhum participations. It is the only sailing school in the West Indies to have gained World Sailing approval and serves as the perfect springboard for many up-and-coming offshore racers. With regards to the Mini circuit specifically though, Kéni believes that coming to France is imperative if you are to progress quickly, at least for the moment.

He had this to say before the start in La Rochelle: “There’s no real training infrastructure for the Mini circuit in Guadeloupe. There aren’t any Minis out there and no Mini training cluster, so battling it out with fellow Mini sailors is complicated as there’s just nobody out there doing this kind of thing yet. Essentially, if you want to participate in the Mini Transat, you have to do the 1,000-mile qualifier and there are no Mini races in Guadeloupe, which straightaway makes things difficult. Maybe one day there will be some!” he says hopefully. “For now, the best way to get into this particular circuit is to move to Brittany as that’s the best school in offshore sailing to my mind, so for me the choice was Lorient, where I moved 2 to 2 and a half years ago to train, to sail and to progress and things are going pretty well so far.”

Speaking to him dockside before the start of the 2019 edition, you get a real sense of serenity and a maturity that belies his years. Equally he is very obviously someone sincere who is very appreciative of his roots, declaring himself to be “proud of the way I’ve represented Guadeloupe so fittingly” at the end of his 2017 race. Naturally then, his words are backed up by his actions.

Indeed, between two Mini Transat campaigns, the Guadeloupe Region was pushing for him to take part in the 2018 Route du Rhum, an invitation he turned down because experience has taught him that if a race is run every four years then you need that long to properly prepare yourself for it in terms of finding a good boat, a budget and a team to work on it. As such he felt he would be lying to the island’s inhabitants if he accepted the mission and he didn’t want to disappoint them with a mediocre result. He was at the race start in Saint Malo to cheer on his compatriots though of course.

“To continue to progress, you can’t take any short cuts,” he explains. “You can take big steps, but you have to make sure that you’ve nailed the first ones firmly in place beforehand. I believe I’m perfectible and that’s why I’m back for another Mini-Transat. My target for this year’s race is to do the very best I can and secure a podium position this time. Even I was surprised by how well I did in the last Transat. It was my first solo transatlantic passage (he’d previously made a crewed passage) and I didn’t have the boat to win the race either, but I came off pretty well.”

Pretty well seems like a typically modest analysis from Kéni. He doesn’t mention the fact that he was also the youngest sailor in the race. Just 21 at the time, he secured 8th place in the first leg of the 2017 Transat after getting off to what he described as a sluggish start, and he fought even harder on the second leg to take 5th place in the prototype category taking him up to 4th place in the overall Proto ranking, absolutely smashing his pre-start objective of a place in the Top Ten.

“I’d like to do the same again this time, if not better. I’ve gone for the production boat category this time as I believe I’ll have a really good battle on my hands and she’s a brand-new boat. I think the secret to doing well in this race is managing both your boat and yourself; managing your gear, making sure you sleep, eat and drink properly. You have to be everything. You have to be the skipper, the cook, the cleaner, the trimmer, the doctor, the technician, everything! Being versatile is what enables you to achieve great things, and that’s what sets you apart.”

So, what it’s like being one of the sailors on the Mini circuit? “Being part of the so-called ‘Mini family’ is something I really appreciate, because it contains a very mixed bag of people with a wide variety of profiles. There are amateurs and so-called pros and we do lots of training together so it remains a little family and the atmosphere is just excellent. Once we’re out on the water, we’re in competition mode of course, but on land, we’re really all together as one, and the competitive aspect isn’t such a big factor.”

Having originally developed a passion for being out on the water through fishing trips with his grandfather and uncle, this sense of ‘family’ clearly colours Kéni Piperol’s progression in this domain and he hopes that his achievements will encourage his compatriots to just get out there, forget about all the excuses we make for not doing things and follow their own dreams out on the water.