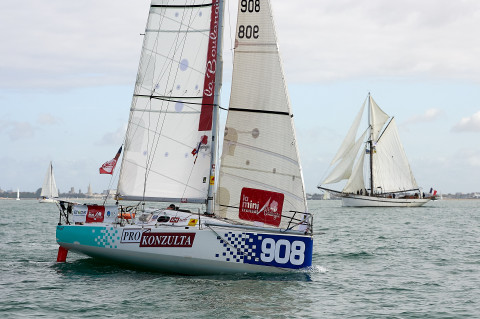 The competitors in the Mini-Transat La Boulangère have now been at sea for over five days and they’ve already seen it in a vast array of colours. After a long run in meaty conditions, the wind has eased slight this Thursday, treating some of the sailors to a little respite.

However, this reprieve will be short-lived. Indeed, another obstacle is looming over the final section of the course since a ridge of high pressure is sprawled across the path of the Mini sailors.

At the 12:00 UTC position report, François Jambou (prototype) and Ambrogio Beccaria (production boat) were still leading a very scattered fleet that stretches right back to the Briton Joe Lacey, who will be relieved to round Cape Finisterre shortly.

Following the retirement of Pavel Roubal, who was airlifted to safety last night offshore of Portugal, 86 sailors in the Mini-Transat La Boulangère are still at sea. However, two are still on a pit stop: David Kremer in Baiona and Jonathan Chodkiewiez in La Coruña. These two racers haven’t yet indicated to Race Management whether or not they’ll be able to set sail again to complete this demanding first leg between La Rochelle and Las Palmas de Gran Canaria.

Pavel Roubal (908) activated his distress beacon last night at 23:30 UTC while he was sailing along the Portuguese coast. Safe and sound, Pavel was picked up by the MRCC in Lisboa at 02:00 UTC. The transom of his Mini 6.50 was ripped out. He landed in Lisbon this morning and contacted Race Officials to inform them that he was okay.

Meantime, the racers sprinting down the coast of Portugal are in a very quick and exhausting phase, which has been gruelling for both their bodies and their gear. We’ll find out more about that once they make the finish line and the skippers can talk about their race, but it’s highly likely that these conditions have caused a bit of damage that is hindering their progress to varying degrees.

This seems to be the case for German skipper Morten Bogacki. In fact he’s been making headway at a reduced speed since this morning and is doubtless trying to resolve some technical issues.

Jambou and Beccaria staying on track

François Jambou is setting a furious pace in the prototype category. In 24 hours (from Wednesday 12:00 UTC to today at the same time), he’s covered an astonishing 251 miles. His direct rivals (Axel Tréhin and Tanguy Bouroullec) are struggling to keep up, but there’s still absolutely all to play for with over 400 miles to the finish, with plenty of traps along the way.

In the production boat category, Ambrogio Beccaria is giving all he’s got and remains today’s leader after sailing his usual virtually flawless race. Julien Letissier, Félix De Navacelle and Guillaume L’Hostis are his closest pursuers. Astern of them, a compact group remains in ambush. At the 12:00 UTC position report, there were just 10 miles separating 5th (Florian Quenot) and 10th place (Lauris Noslier).

A complicated final sprint on the cards

Somewhat predictably perhaps, this first leg of the Mini-Transat La Boulangère has been varied to say the least. The sailors have had to deal with all kinds of conditions and make headway on pretty much every point of sail and it’s those sailors with versatile profiles who will have their spoils of the top spots in the Canaries.

Though the breeze is gradually easing, it’s on Saturday that things are set to become seriously complicated as a ridge of high pressure sprawls menacingly across their path between Madeira and the Canaries. This will result in a very light, or virtually inexistent breeze. According to the latest routing, the first competitors may well make landfall in Las Palmas from Saturday night through into Sunday.

Accessing the Mini-Transat from… Japan

Masa Suzuki, a 34-year-old sailing consultant from Kanagwa in Japan, would doubtless say that he is finally ‘living the dream’ as he hurtles down the Atlantic, carving out a smooth wake just shy of the top third of a fleet of Mini 6.50s that set sail from La Rochelle last Saturday with 87 skippers. Positioned in an excellent 27th place among the production boat category (No.470 Masa Flat Water) at 12:00 UTC this Thursday, he is currently making over 9 knots of boat speed on a virtual run offshore of Lisbon. Through the many talks he gives back home and to the sailing team at Tokyo University in particular, hopefully there will be even more sailors representing Japan in future editions of the Mini-Transat

All sailors wishing to take part in the Mini-Transat are required to satisfy certain regulatory standards such as safety training and racing experience over a particular distance aboard the boat with which they intend to compete in the Mini-Transat itself. As a result, many international skippers decide to do most of their training in France and they have to overcome numerous organisational, financial and logistical problems along the way.

Always beaming from ear to ear, Masa is easy to spot as we meet dockside in La Rochelle before the race sets sail to discuss his journey to the start line of this Mini-Transat La Boulangère 2019.

“It’s been hard trying to balance out my work life and life in Japan with training for this race in Europe. Prior to this Mini-Transat, I participated in two races on the Mini circuit in 2018. I was 30th / 47 in the Marie-Agnès Péron Trophy in 2018 and then 33rd / 51 in the Mini Fastnet the same year. I chose not to take part in the race from Les Sables to the Azores and back as it was a big commitment timewise and I didn’t think I was experienced enough for such a long race back then and felt I needed more time to flesh out my skills.

“I notably secured 23rd place with Akitoshi Ichimura in the Mini Fastnet 2019. I learnt a lot from the latter race, such as how to control the boat with a variety of winds, ranging from calm to 35 knots, how to bring tactics into play in the middle of the strong current and how to keep on sailing even though I was exhausted. I realised that I still had a lot to learn about racing such as the weather, understanding sea charts and physical fitness training. The competition element was vital though because it enabled me to see whether or not I was capable of doing the Mini-Transat. I’m pleased to say that the outcome was favourable!” The Class Mini family are pleased too!

So if you’re from a non-European country, how do you go about qualifying for the Mini-Transat?

“Essentially you get in contact with the Mini Class in France and to help you prepare they have some special measures for non-European sailors, known as the DCQ (“Dérogations au Calendrier de Qualification”), which are special measures the French Race Committee has set out to enable you to be exempt from the standard qualification schedule.

“As a non-European, to qualify for the Mini-Transat specifically, you have to have a total of 1,500 miles racing experience on the boat with which you will compete in the Mini Transat plus 1,000 miles of non-stop singlehanded sailing as well as certification stipulating that you have successfully passed a course in safety training and radio communications. The popularity of the Mini-Transat is off the scale so it’s always oversubscribed. However, there are six slots available for sailors with this DCQ so you just have to be as committed as you can be to your Mini campaign and then hope your number comes up. It works on a first come, first served basis once you’re qualified.”

It should be noted that there is presently no EU visa waiver for Japanese citizens for stays of less than 90 days. After 2021, though, Japanese citizens traveling to Europe from Japan will need an ETIAS visa waiver, that will be valid for three years. During those three years of validity, Japanese passport holders will be able to spend 90 days in the Schengen area during any 180-day period for business, tourism or transit purposes. For longer stays or for trips for other purposes, a Schengen visa for Japanese citizens, or an appropriate national visa will be necessary.

“Your main focus should be getting in as much training as you can and, if possible, sign up to a specialist Mini training hub. If there isn’t one in your country then try to use up any holiday time training in France, find yourself a temporary base near a training cluster, in my case Lorient, where I train when I can at the very popular and highly successful Lorient Grand Large. It’s hard to find the time and I would have liked to have a done a lot more training, but sometimes you’ve just got to chase after your dreams!”

In chasing his own dreams though, Masa Suzuki is also inspiring other Japanese sailors to do the same. “I have done 2 presentations about the Mini Transat in front of young sailors who belong to Tokyo University’s sailing team. For now, their experience extends to keelboats and sailing J24s so I introduced them to my offshore racing and tried to pass on my enthusiasm. I hope they keep sailing once they graduate.

“They seemed interested in my story, which was lovely to see, so I’ll continue making speeches in front of young sailors. I have been so impressed by the help and the kindness shown to me within the Mini Class. Equally striking is the fact that no matter what your result, everyone celebrates all the finishes, at whatever time of the day or night. I’ve never witnessed that before. In fact, I feel so welcome here that I’m considering living in France, if my wife will agree!”

Compatriot and Vendée Globe skipper Kojiro Shiraishi believes there is a bright future for Japanese skippers wishing to build competitive offshore racing campaigns. “There are already two Asian youngsters working with me on my campaign and I also know another Japanese sailor whose participating in the Mini-Transat – Masa Suzuki – so things are heading in the right direction.”