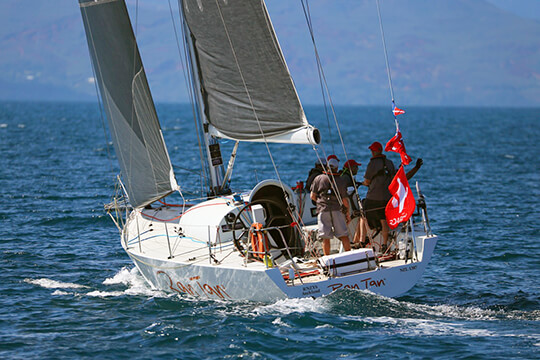 The sixth New Caledonia Groupama Race for a fleet of 23 boats started in a balmy paradise, the procession of multihulls and monohulls setting off to complete an inshore triangle along the spectator zone before Brian Peterson’s Elliott 50 Ran Tan led them out of the lagoon to open water.

Chest-beating began immediately after the start gun, Tony Kirby’s Ker 46 Patrice (AUS) and Graeme Wilson and William Goodfellow’s IRC 52 Miss Scarlet going toe-to-toe behind the Kiwi boat Ran Tan to the delight of the busy flotilla of media and spectators, both on the water and ashore.

The first multihull away was the Crowther 40 Ave Gitana (NZL) skippered by Sharon Ferris-Choat, the light winds perfect for the smallest multihull among the giants.

Locals say the race can’t be won on the first day, but it can be lost due to the four knots of tide at Havannah Passage on the south-east corner of the island. “With this wind, if you don’t get through before the tide change you are stuck you could go backwards, and the race can be lost while the rich get richer,” says the race communications manager Matthias Balagny. Close to the rock at the southerly tip of the course is also where ‘mascaret’, the French word for the whitewater of breaking waves, can suddenly occur due to opposing wind and tide.

The morning start on Sunday June 17, Father’s Day in France, was the perfect promotion for the event’s tagline ‘Noumea – the heart of Pacific Sailing’ and showcased the capital and surrounding waters in the most amazing light.

Light NE-E winds and sunny skies ensured a leisurely early pace and brilliant vision and images to showcase the Cercle Nautique Calédonien’s feature biennial event, which grows each edition in terms of international interest and entries. The easterly breeze built to 12-14 knots further south and through the Woodin Canal the fleet made excellent time thanks to the favourable tide and funnelling effect between the land masses.

At 1530hrs on Sunday the report from Patrice said: “6 to 8 knots and shifty. We had a great start and have been holding the bigger boats. It’s going to be a hard night with the wind shifting further left and a lot more on-the-wind sailing”.

At 1600rs Miss Scarlet was ahead of Ran Tan and Patrice in the 654 nautical mile anti-clockwise spin around New Caledonia and the world’s biggest lagoon taking in the way points and avoiding the exclusion zones of race-ending shallow reefs not surveyed since the early 1900s.

The race record set in 2016 is two days for a multihull and two-and-a-half days for a monohull. Those fastest times are safe for this edition due to forecast 4-6 knot E-NE on Monday and the front now due later, around midnight on Tuesday leaving 15 knot south-west winds in its wake.