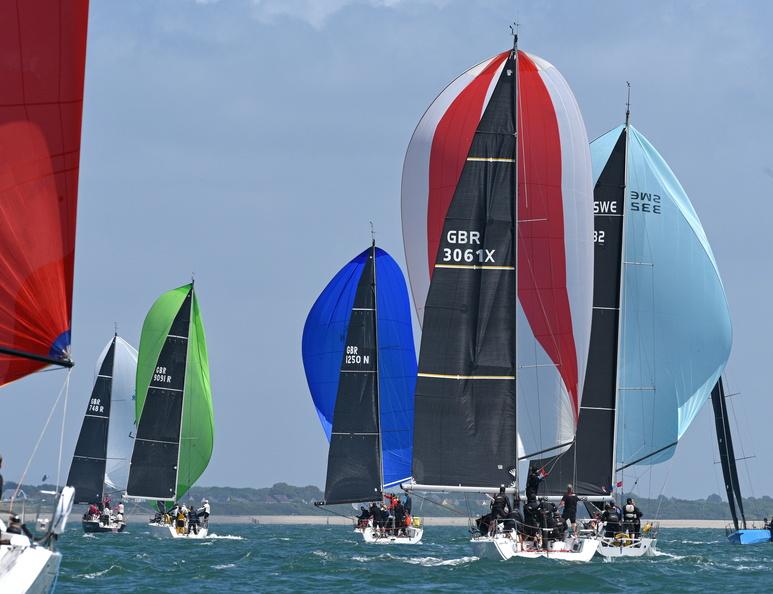 A cracking first day on the Solent - Rick Tomlinson pic

Cowes: Apart from Rán and Jukebox, the Solent was star of the show on day one of the Royal Ocean Racing Club’s annual IRC National Championship, one of the leading events for the RORC/UNCL-owned yacht rating system.

The race committee led by PRO Stuart Childerley laid on two windward-leewards and a round the cans course on the central/eastern Solent in periods of brilliant sunshine and a WSW wind ranging from 10-20 knots.

In IRC One there were few surprises when Niklas Zennström’s immaculately sailed Rán scored three bullets. While the smaller fleet in IRC One technically makes it harder to win the overall IRC National Championship title, the all-black Carkeek FAST40+ is on the best possible track to claim this title that has so far evaded Zennström.

Second, four points astern of Rán, is the Gp42 Dark N Stormy, campaigned by Ian Atkins, President of the new Grand Prix Zero class, which at this event encompasses IRC One.

While Dark N Stormy has a strong crew, including Volvo Ocean Race winner and two time Olympic medallist Ian Walker, Atkins acknowledges that there are strong crews across the class:

“There are recognisable faces everywhere…. if you don’t nail the start and go the right way up the first beat it is a long way back from that. We need to be smarter getting off the start line. We are getting our act together slowly but surely.

“Rán is in a class of her own, but is great to show what can be done. It is up to us to close the gap as much as we are able…”

In addition to the old hands on board, are youngsters including ‘famous daughters’ Suzy Peters and Abby Childerley.

It was a good day for what IRC calculates as the ‘fastest’ boat here – the Ker 46 Van Oden, skippered by Volvo Ocean Race sailor Gerd-Jan Poortman and sailed by a talented youth crew from the Rotterdam Offshore Sailing Team.

With a trio of fourths today they are third overall in IRC One.

“We are racing Ian Walker, Bouwe Bekking [on Elvis] – whereas our crew has an average age of 22 and this is their seventh big boat race in their lives,” Poortman mused.

“We made some mistakes, but we did some good stuff as well. It is challenging against these FAST40s, especially when it is windy and downwind when they sail lower and they plane more easily. It is good competition that we don’t have in Holland.

“Here we have boats like ours – there isn’t one with a spinnaker pole. IRC is simple to understand and it creates boats that are racy. There is a place in this world for grand prix racing and we should promote fast boats that are planning with big bowsprits and big cockpits that are great fun.”

In IRC Two the competition is between the Performance 40s and nine boat Cape 31 majority, that IRC rates alongside them, despite their diminutive size. Leading after day one was surprisingly not the Cape 31’s UK series leader Michael Bartholomew’s Tokoloshe 4, but John Cooper’s Fanatic. A 1-1-3 gives her an eight point lead over Tony Dickin’s Cape 31 Jubilee.

Uncharacteristically deep in IRC Two is Anthony O’Leary, who, in days gone by, led his Irish team to Commodores’ Cup victory here and claimed the 2014 IRC National Championship title on his Ker 39 Antix (now Andrew McIrvine’s La Réponse). O’Leary admits he is coming to terms with his new Cape 31 which he races with members of his talented family.

“It is everything it is advertised to be. They are beautiful – to be on a 31 footer doing 21 knots, it is not short on excitement. Mark Mills [the Cape 31’s designer] has done a great job. This is our fourth weekend we have been sailing it. We reckoned we’d come over and learn a lot,” he said.

“That is the nice thing about sailing – we thought that windward-leewards would be our speciality and we’d get eaten alive on round the cans by the Capes, but it wasn’t like that today. I am not bothered racing them – most of the time we can beat them on corrected time,” Bottomley said.

The surprise class is proving to be IRC Three, where the favourite is past winner Adam Gosling’s JPK 10.80 Yes! All was going well with a 1-3 until Yes! finished sixth in the final race dropping her to third. Instead today’s star performer was not a modern, chined French IRC weapon but John Smart’s 20-year-old Cowes-based J/109 Jukebox, which posted a 2-2-1.

“We took it race by race,” Smart explained. “We’re pleasantly surprised. We were imagining that the JPKs and the J/112e would smoke us downwind, but we are hanging in there and are still in the game. We were solid. We have four new crew.

“We spent a bit of time yesterday practicing. We have the Morris Minor out there! It shows that the J/109 is a 20-year-old boat, but it is still competitive. Upwind we were going well. Downwind we are just holding our position because there are much faster boats. In the last race there were a lot of wind shifts and we were playing them more than we’d normally do.

“The courses were great as were the conditions – RORC always lays on first class racing so a big thanks to the team.”

Racing continues tomorrow with an earlier first warning signal at 1025.