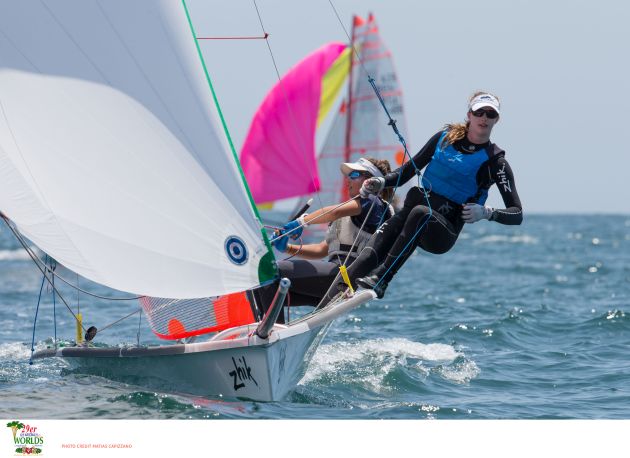 LONG BEACH, Calif., August 5, 2017 – It was last ditch efforts and comebacks on the race course this final day of racing at the 2017 Zhik 29er World Championship regatta at Alamitos Bay Yacht Club.

For a pair of Aussie ladies, a bullet in the second race of the day said ‘Don’t count us out yet.’ For the team of Benji Daniel and Alex Burger, RSA, it was a comeback race that sealed the deal. And for a young man from Ireland, it was the prognosis of a full comeback after a near tragedy on the racecourse.

Daniel and Burger were crowned the 29er World Champions today – after an uncharacteristic bottom-half-of-the-fleet finish in the day’s second race, threatened their success.

Only yesterday had the two South Africans realized they had a shot at winning the prestigious World Championship title. Coming into the final day of racing, Daniel said the pair felt confident in their overall ranking; particularly after today’s first race – a third place. ‘So confident, they chose to take a flyer at the start of Race Two.

But their risky maneuver didn’t pay off and they finished 33rd. So they didn't take any chances on the final race, instead, doing what they did best. Sail fast.

At the start, they grabbed the lead and never let go; until Daniel dropped the tiller and slid backward into the water 20 yards beyond the finish line. The two waved in the other competitors and raised the South African flag over their boat, later hoisting it atop the mast, before sailing into the harbor.

“We’ve had worse days,” said Daniel back on the beach. Asked about the last race and he smiled and said, “We wanted to end it in style.” Their nearest competitors were more than double the points behind.

Although the duo has only been sailing together for six months, Burger said other experience helped secure the win. Burger has sailed in other World Championships, and in other boats. He described the 29er as fun and exciting, and said his fellow racers are extremely competitive for a junior fleet. “This is not a kid’s race; it’s physical and it’s competitive.”

Finishing with 56 points, the second place team, Benjamin Jaffrezic and Leo Chauvel, FRA, were also recognized as the reigning Youth World Champions, 18 and under. Only two points behind were fellow Frenchmen, Theo Revil and Gautier Guevel, to fill the podium.

Six days of spirited competition took place under varied weather conditions and unfamiliar conditions that tested their strengths and exposed weaknesses. From the light and fluky air of early week, to yesterday’s brisk breeze, to the pleasant 8-knot zephyrs that graced the fleet during today’s final races: capricious conditions kept the racers on their toes – and on their wires.

One-hundred-twenty-nine teams from 17 nations have been competing in the six day event: three days of Qualifiers followed by Finals, Thursday, Friday and Saturday.

An incident on the racecourse nearly marred an otherwise idyllic regatta; but others on the water came to a swift rescue. After winning Race 10, at the top of Race 11; Ireland’s Johnny Durcan and Lola Kohl capsized during a frenzied mark rounding, trapping Durcan, 16, beneath the skiff. Kohl called for help, and the fleet responded.

“I was so impressed – the other kids on the water were first-on-the scene; they immediately responded, jumping in without any hesitation,” said ABYC Commodore Chuck Clay. “They weren’t thinking about the regatta, they were only thinking about their fellow sailor.”

Added Regatta Chairman Ed Spotsky at the awards ceremony, “Today showed us who you people are.The Spanish coach was the first one under the boat, and a bunch of other teams and coaches were diving in, putting his (Johnny’s) safety ahead of everything else. You showed that sailors are special people, and we thank you for your efforts.”

After the rescue, ABYC’s emergency protocol kicked in, said Clay. Each course had a dedicated Medic and Safety Boat, and procedure. Long Beach Lifeguards were called to assist, and transported Durcan to shore and awaiting paramedics. “We have the best lifeguards and harbor department, minutes away; and an excellent hospital. We are very fortunate, and are thankful Johnny will be alright.”

Later that evening, during the prize-giving, Coach Matt Thomas conveyed a heartfelt message of thanks from Durcan’s parents. He added, “Johnny is still in hospital, and he’s asking for redress.” The crowd, thankful and relieved, laughed and cheered. And some cried.

But their first race today was “a shocker” Davies said. “Everyone’s finding its hard to be consistent,” in the big fleets and variable breeze. After finishing 26th, their coach approached with a pep talk. “He said, ‘Just don’t worry about it – tough it out. Every race is a new race.’”

It was apparently just what the doctor ordered. At the next start, the Aussie gals sprinted off the line, trading leads with Bonilla and Miro, with Catherine Lindsay and Jana Laurendeau, USA, just astern – all the way around the course.

It was ‘ladies day’ as the gals’ teams finished in places 1-2-3, proving “sometimes it pushes you to want to do your best,” having tough competition, according to Woodward. “You learn a lot.”

Woodward and Davies had been friends but racing rivals until four months ago, when they teamed up on the 29er. Finishing 18th, and the top girls team, they plan to continue on to Hong Kong for the 29er Worlds next year.
Second place in the all-female division, sisters Freja and Astrid Frykman had a stellar day of 5-8-5, and tied for 23rd, in Gold fleet. Spaniards Bonilla and Miro were awarded third place girls team.

Alie Toppa and Jacob Rosenberg were recognized as the leading US entry, finishing seventh place in the highly competitive Gold fleet; having won the 29er National Championship title last week.

It has all come as a bit of a pleasant surprise to the duo, who split the coasts: with Toppa in Florida, and Rosenberg in California. “At the beginning of the summer – we didn’t have any expectations, because we hadn’t sailed together since last summer,” said Rosenberg. “But as soon as we began practicing, we realized we had a chance, if we sailed well. We went in with the goal to win.

But the competition was fierce. “They are obviously very good, very practiced. It was a great opportunity to race against the best in the world– and we were excited to see how we stacked up,” he continued. They’re leaving today knowing, “we can compete with the best, we had a shot.”

Joan Mollerus, 29er Class Association President, lauded ABYC for “an amazing event and enormous effort” and recognized the safety team in their handling of “a pretty scary event.”

“They knew exactly what to do, and they did it was a quick, quiet professionalism.” To the fleet of young people, she added, “The 29er fleet showed a remarkable display of sportsmanship, and this will go forward, and the 29er fleet will be known for good sportsmanship. There are just not enough thank you’s to go around.”

“This was the best regatta,” said Barry Johnson, 29er Class executive board member and the official measurer. “There’s been nothing to gruzzle (sic) about.” He called the volunteer base unbelievable and the feeling “relaxed.” He complimented competitors not only for a lack of infractions, but also for their positive attitudes; and had kudos for the race management team as well.

“I found them to be very transparent. Everyone knew at all times what was going on and why. It was second to none.” The result he said; there were no upset parents or coaches demanding explanations from the shore team. Johnson said the US amazes him with the amount of youth sailing activities here. “I heard youth sailing was suffering, but I don’t see that.”

It’s been a dozen years since the US has hosted the 29er World Championships – but hopefully not the last. With the 2018 event scheduled in Hong Kong early next year, and the championship moving to Europe after that, it’s hoped that 29ers will return to ABYC before the rosy glow of a successful event wears off.