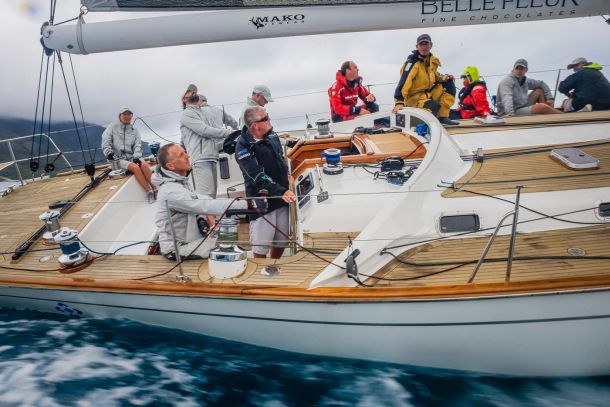 After five days of sunshine and varied sailing breezes at Audi Hamilton Island Race Week it would have been churlish to complain about the soggy start to the final race of the regatta yesterday – August 22, 2015.

The entire fleet was sent off on the Lindeman Island Race in a heavy drizzle that came and went throughout the day, with low clouds hanging persistently over Pentecost Island’s mighty peak. The 10 knot south-east breeze remained steady before dropping out completely mid-afternoon, leaving the non-IRC divisions finishing late in the day.

Opportunities to make up places on the final day of the week-long winter series in the Whitsunday islands were mostly captured on the upwind leg from the start near Catseye Bay to the narrow channel between Lindeman and Shaw Island. None of the crews could afford to stay ashore with their division win secured.

John Brand’s Queensland Marchi 39 Star Ferry hung on to win the Non Spinnaker division despite finishing in ninth position yesterday. “It was really frustrating out there towards the end as the wind disappeared, but some of the conversations across the boats were very entertaining” said the relieved skipper.

Across the cruising divisions the competition was tight all week, reflected in the countback wins for Tony Walton’s Victorian RP46 Hartbreaker in the Racer Cruiser division and Dave Rooke’s stunning Farr one-off, Virago II, in Cruising Division 1.

John Raff’s Jenneau 53 Kate from the Royal Yacht Club of Victoria and Mike Selbie’s Dufour designed D’Euphoria won Cruising divisions 2 and 3 respectively. “We’ve had a terrific week and the racing’s been very close in our fleet with four or five boats constantly swapping tacks,” said Raff. “We came all the way up from Melbourne with the boat and there was snow on the NSW and Queensland coasts as we passed, so it’s been great to have the weather and the sailing we’ve had this week.”

In the Multihull Cruising division Alan Hunter’s Seawind 1160 Talisker closed out the week with a first place to win overall on the crew’s first Race Week. “We had a great race to finish with today,” Hunter said, “we stayed ahead of the fleet on the upwind leg then popped our big square spinnaker for a great run to cross the finish line just as the wind dropped out.”

Divisional winners and placegetters received their trophies and kicked up their heels last night at the final gala prizegiving for the 32nd Audi Hamilton Island Race Week that drew a second highest entry list of 202 yachts from every Australian state and territory, plus overseas.

Principal Race Officer Denis Thompson was delighted with the series, “It’s been one of the better weeks for sailing. We did our usual thing of making up courses to suit the conditions and the boats. When we have wind like we did most days it makes it much easier for the race committee.”

Reflecting on highlights from this year’s regatta, Denis was particularly pleased at how well the cruising multihulls handled the upwind legs in a bit of a seaway, and crews in the Trailables division made the most of the lumpy conditions. “I think we’re going to have a huge influx of trailables in the next few years,” he reckons.

Final results for each division