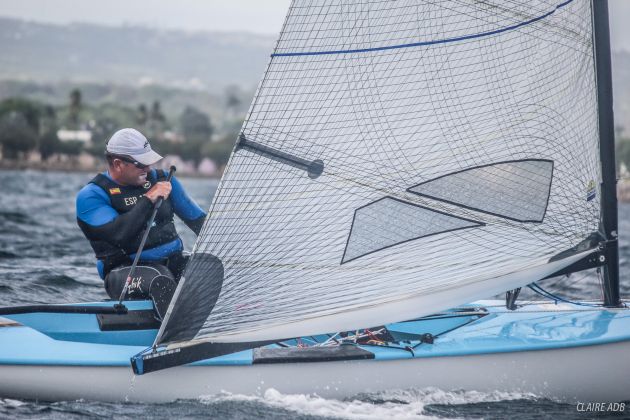 After the practice races on Sunday was abandoned due to strong winds, a similar forecast for Monday didn’t lend much hope for the racing to keep to schedule. An early AP ashore fuelled that dismay, but then the wind moderated to 18-20 knots and the fleet was sent afloat.

The 140-boat fleet is split into two starting groups, Yellow and Blue, with fleet assignments based on random selection. The Yellow group was widely considered the best group to be in with most of the favorites assigned to Blue. The Yellow group also has a potentially easier ride in strong winds as the outer loop is located closer to shore, so trades flatter water for more shifts against the inner loop which is further offshore.

Maier led the Race 1 at the top before Hay passed him offwind to hold on to win. They swapped places for the second race, with Maier leading from start to finish. Piet Eckert, from Switzerland, picked up to third places.

In the Blue fleet , Trujillo dominated from the front winning both races with ease, while 2015 Finn Masters Champion, Vladimir Krutskikh, from Russia picked up two second places. Karl Purdie, from New Zealand, and Allen Burrell, from Great Britain, completed the top three in each race.

Hay was pretty happy with his day. “It was a good race with strong wind and little shifty. I think the level here is good, with strong guys and heavy guys, and for me it’s a little difficult.”

“My good downwind speed is compensation for the upwind, so I can compete against the heavy guys in these conditions, and the course was not that long, so you should be very dynamic and very speedy on the action.”

“And a lot of fun. It was very pleasant racing in big waves and lots of gusts.”

Trujillo said, “It was a really difficult but fun racing. It was 27-30 degrees temperature and 20 knots and 30 degree shifts. It was quite a challenge. The level of the masters in my group is impressive. We had two general recalls and started with the black flag and everyone was fighting hard for the pin, so it was exciting racing and I am looking forward to tomorrow.”