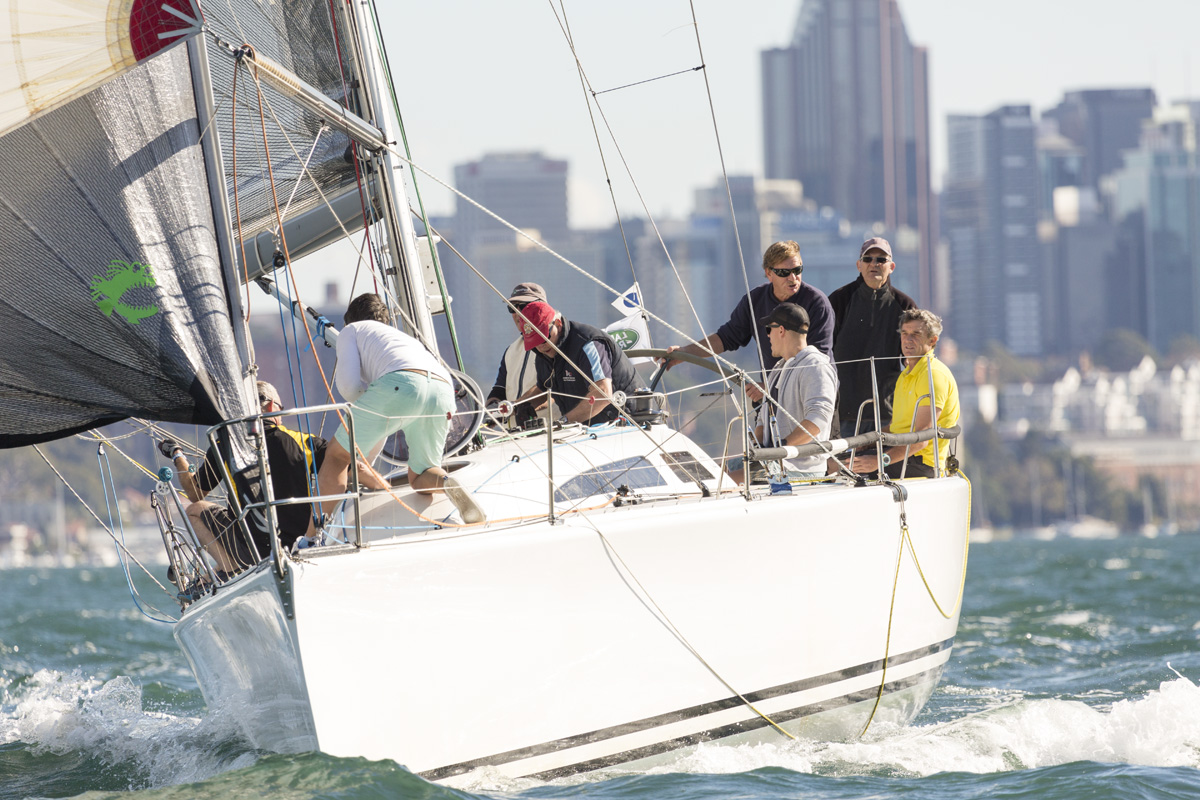 A consistent southerly breeze greeted the 100-boat fleet on a glorious sunny day for Race 6 of the CYCA Winter Series on Sydney Harbour. After six races, there’s proof that every point counts in the overall pointscore, and it’s tight at the top.

Though there were familiar yachts that continued their winning dominance in their divisions on Sunday, it was not the case for all. One crew in particular that was shocked to take the win was that of the Sydney 38, Admiral, owned by Steve Piper.

Steve and the crew of Admiral have been making wild improvements of late and their results in the Land Rover Winter Series show just that. After two sevenths, two fifths and a fourth in the one design class, this week they managed to take the top spot overall.

“We were extremely surprised to win!” commented Piper. “We don’t have a lot of good gear for the boat, but we managed to get a hand on two second hand headsails this week thanks to Robert Speedy.

“The boat found was loaded and had good horsepower. The crew sailed well together and didn’t make any mistakes,” he continued. “It was a great effort by the team, when we first started racing we were about an hour behind Utopia and the others. This week, only eight minutes behind them.

“We’re a low buck outfit and race Cat 3, so carry all of our offshore gear and the rest of it on board with us. We’re just so happy with the win!” he ended.

Another yacht working their way up the leader board in their division, is Philip Grove’s Sydney 39 Cruiser Racer, Huntress in Division B. With some consistent mid-fleet results in the first half of the series, a win on Sunday jumped them to fifth overall in the division.

Mainsheet hand on board Huntress, Garth Sundberg explained the nature of the day and the strategy that gave them the win.

“It was a stable breeze and the conditions suited us, which was a variation on previous races,” Garth explained. “The thing that made the difference in the race was getting the right shift at the right time.”

The winner in Division B always has a tough fight as only one yacht has won more than one race so far, and the top seven placed within 11 points of each other overall.

“There were a few good opportunities for us across the course. We were able to get a chance to settle in on those reach moments and not have to worry about the any gusting conditions. We could just focus on hitting our numbers, which we were able to a good job of,” Garth added.

“Foreign Affair was just behind us in second, and they’re tough competitors. We’re excited to get one over them this time.” he finished.

Sebastian Bohm’s The Goat won Division A1 yesterday for the third time out of six races, to be leading the series overall on countback over Tony Kirby’s Patrice. Also leading the series overall after winning Race 6 are Quetzalcoatl (Antony Sweetapple, Anthony Bruce and James Lee Warner) in Division C, Rapid Transit (Andrew Wyllie and Beth Abbott) in Division E and John Messenger’s Utopia in the scratch results of the Sydney 38 On Design Class.