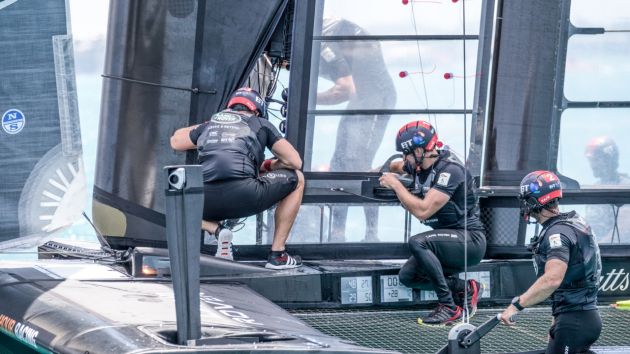 BAR crew inspect the damage to their wing. Photo ACEA.

After an involuntary lay day yesterday, when lack of wind cancelled racing at the America's Cup Challenger Semi-finals in Bermuda, today saw clear skies and winds of around 15 knots – ideal conditions for the high-tech catamarans.

The semi-finals are a best-of-nine series, pitting Team New Zealand against Ben Ainslie Racing and Artemis against Team Japan.

Talk from helmsmen Peter Burling and Ben Ainslie prior to the first race was all about being aggressive in the pre-start. As predicted, Ainslie went for the hook – trying to get underneath the Kiwis so he could force them up into the wind and a potential stall. But Burling was awake to the tactic and blocked it, which allowed him to take the superior position where he could ease off at the start and run at nearly 40 knots of boat speed to the reach mark.

Running downwind, a slight shift gave the Kiwis a better line into the bottom gate and they swept through six seconds ahead. Then, in an instant, the pressure came off.

A loud bang eminated from the British wing and immediately Ainslie and his crew were forced to back off. A quick inspection showed a broken camber arm, meaning any pressure on the wing could bring it down.

Ainslie called the race committee and officially retired from the race. The support rib came alongside and the boat was gingerly backed all the way to the dock, where the wing was removed.

As the second race between the two boats started, BAR was flying – attached to a crane at the dock and being lifted from the water. The Kiwis had to start the race, but the referee immediately called them to advise that BAR was black-flagged for failing to start and Team New Zealand had a 2-0 lead.

“We’ve had a really tough day and unfortunately we suffered a breakdown in the wingsail control system,” conceded Ainslie. “We got back to the dock to try and fit our spare wing but we just could not get back out in time for the second race. It is extremely disappointing to lose two races to Emirates Team New Zealand in that way but a positive to take is that we had some good gains in our speed and we will keep fighting all the way.

“These boats are really high-tech and we are pushing them to the limits. It was unfortunate what happened and we certainly did not need that today, but that’s life. The shore crew will be working into the night to fix the wing. They have been fantastic throughout the whole competition and no doubt we’ll come back stronger tomorrow.”

Meanwhile, the other two teams had sailed their first race.

Nathan Outteridge, at the helm of Artemis, went hunting but pulled away at the last minute and sped across the line in a good position. Dean Barker brought Team Japan up to speed and it looked for a moment as though he had done enough to get an inside overlap at the reach mark. But Artemis just managed to put some wind wash on the Japanese boat which gybed for the first time and touched down, bleeding off speed.

This was not to be a one-sided procession, however, as Chris Draper on the Japanese boat picked a couple of good shifts on the first beat and put Barker in front at the top mark.

Now Artemis was playing catch-up and was forced to do more manoeuvres as they went looking for shifts. None presented themselves and the Japanese were untroubled to cross the finish 23 seconds in front.

The second race started with more aggressive tactics. This time Outteridge went for the hook and almost got it. He called for the penalty but Barker had managed to stay ahead and was first across the line.

It looked as though Team Japan would run away with the race as they were very smooth through the manoeuvres and held their lead up the first beat and back down the course again. But Nathan Outteridge made his name in sailing by putting his 49er in the right place on the course. He picked a good right-hand shift, closed the gap and then his crew executed a perfect foiling tack.

Atemis was in front at the top mark and it was Barker who was gambling. He threw a gybe to get across to the left-hand side of the course – and lost. Artemis raced away to win by 29 seconds.

“I’m very happy overall to get a point on the board,” said Outteridge. “We had two tough battles but we sailed really well and I thought the pace of the boat was great throughout the day. I think we were unfortunate to lose the first race because we let them through but in the second race we kept the hammer down and took a nice win.”

With the wind at 15 knots, or in the medium range, Oracle's Joey Newton told the commentary team that the Swedish boat may have had it's intermediate daggerboards in, while Japan may have been on high wind boards. The extra drag of the bigger boards could have cost Artemis some boatspeed, Newton surmised.

Whatever the reason, it adds interest to what is already a very exciting challenger series. Lead changes, passing alleys, botched manoeuvres, a poor start, broken gear – there are many factors at play that all but guarantee some close racing over the next week.

So, after day one Team New Zealand leads Ben Ainslie Racing 2-0 while Artemis and Team Japan are locked at 1-1.