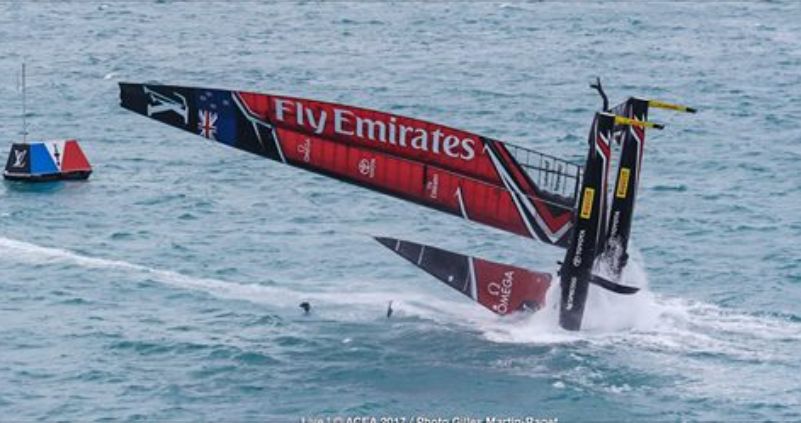 Although racing took place within the upper wind limit of 25 knots, it was obvious that the boats were operating beyond their limits on the second day of racing in the Challenger Semi-final Series of the 35th America's Cup.

Artemis Racing was forced to withdraw from the first race after a bow dunk washed faring off the boat but the major drama took place in the fourth and final race when the Kiwis pitchpoled at the reach mark shortly after the start.

Fortunately there were no serious injuries to the crew, but the boat took a battering and may not be ready to race tomorrow.

The wind gauges were showing an average wind speed of 23 knots when the first race finally started after a 15 minute postponement. The skippers were obviously having trouble with control and chose not to engage in the pre-start, instead going for a time-on-distance run.

Dean Barker on Team Japan judged it perfectly and sped away to a good lead as Nathan Outteridge sat dead in the water. Both boats were doing close to 45 knots as they reached to the first mark, dropping back only slightly on the run to the bottom gate.

Rounding that mark, Outteridge dunked his bows and bits of the faring came apart. He slowed and Barker sped away to a 47 second lead at the top mark. Again Outteridge dunked the bows, showing control was an issue. Bits of faring were also flapping on the Japanese boat but it was obvious that Artemis was in big trouble. Eventually Outteridge radioed the race committee to announce he was retiring from the race.

In the second encounter, it was more of the same. Barker parked himself between the Swedish boat and the start line, pushing them up until they came to a stop. He then bore away and raced across the start line in total control.

The same could not be said of the Swedish boat. Closing the gap as they came into the reach mark at 45 knots, Outteridge saw that he was in danger of hitting Team Japan and had no option but to bail out. He had to ease off and that swept the boat over the boundary line and incurred a two boat length penalty.

In total control of the race, Barker was also backing off to preserve his boat, which meant it took Artemis until the beginning of the first beat to shake off the penalty.

By now the damage was done and with bits of faring hanging from the rigging, the faces of Nathan Outteridge and tactician Iain Percy said it all – total dejection was written large.

Barker nursed his craft around the course and won by 27 seconds. The lead is now 3-1 and Barker requires two more wins to progress to the Challenger Final.

If the sight of bits of faring flying around the boat was daunting in the Swedish v Japan encounters, it was nothing to what would be experienced in the other semi-final.

Yesterday Ben Ainslie Racing retired with wing problems and the shore crew wrorked all night to repair it. But the Kiwis had their own dramas and shortly before the first race started, they returned to their base, lifted out their wing and replaced it with the spare. It was a forced action for which they would later be grateful.

Again, both skippers chose the conservative approach in the starting box and Ainslie got the better of the drag race start. He led around the reach mark and all the way to the bottom gate, which both rounded slowly and conservatively.

A rain squall hit on the first beat, reducing visibility to almost zero and lifting the wind to above the limit. But the race had started so it was “sail on”. There was 11 seconds between the two boats as they went through the bottom gate for the second time but then the old problems rolled back for the Brits. A slow, in-water tack saw the Kiwis sweep past on the inside to sit in front and deliver bad air as both boats pinched towards the top of the course. The Kiwis led by 9 seconds at the top mark.

With the stronger winds causing the race committee to set a nine lap race, there was still plenty of time for changes to happen but faring started to fly off the British boat and the Kiwis extended away to take their third win in a row.

The second race was short but dramatic. Both boats were penalised for being early into the box, so the penalties were cancelled out. Ainslie got underneath the Kiwis and slowed them to a crawl before timing his peel away beautifully and racing to the reach mark.

Trying desperately to catch up, Peter Burling came round the mark too hot, dug in the bows – and pitchpoled the boat. It was stuck with three points in the water – the bows of the two hulls and the tip of the wing. Burling, wing trimmer Glenn Ashby and one cyclor were jetisoned but the other three grinders were left sitting in their cockpits, gazing at the water quite some distance below. 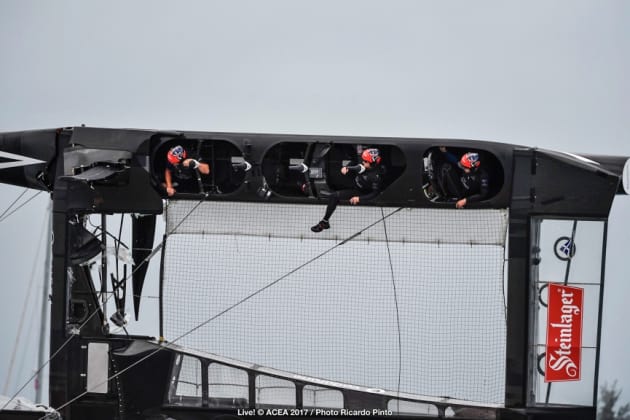 On BAR, Ben Ainslie immediately radioed his support boat to go and lend assistance. “We're still racing until we're told otherwise,” he advised his crew. “let's just cruise here.” He then asked for clarification from the race committee, who confirmed that the Kiwis were black flagged and BAR didn't have to complete the course.

Back at the Kiwis boat, the support crew had the matter in hand. The boat was rocked onto its side, the righting lines were attached and the boat was pulled upright. A dejected Peter Burling could be seen gazing at the wreckage as the whole operation headed back to base for a long night of repairs. They could all be thankful for that late change as the best wing was still intact back in the shed.

“Firstly, and the most important thing for us, is that all the guys on board are safe and with no major injuries,” said Peter Burling. “It is definitely a relief when you see them falling off that you can look back and see their heads above water and that they’re all fine. We sustained quite a bit of damage to the boat but the shore guys are assessing the damage and we feel we will be able to repair it and get back out and into the action.”

So Ben Ainslie had his first win and both semi-finals are at the same scoreline – 3-1, with Team Japan and ETNZ needing two more wins to make the finals.