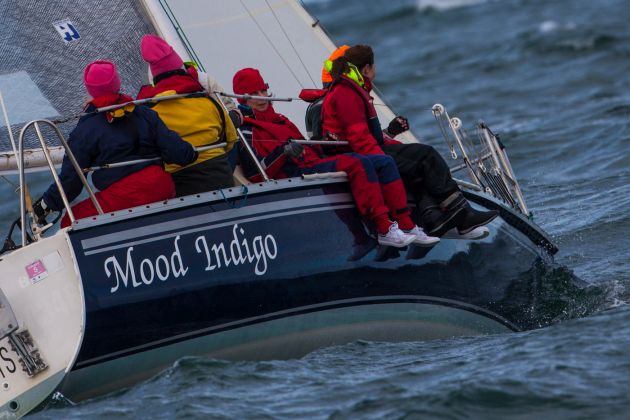 The Royal Melbourne Yacht Squadron and other bay clubs are facilitating three days of competition and camaraderie for close to 150 sailors of all experience levels from Olympians to novices racing a variety of designs from Colombia 22s at 22-feet up to the largest 40-foot keelboat.

A high pressure system means a long-range forecast of winds 10-15 knots and variable across the Queen’s Birthday long weekend. Not the news South Australian skipper Mary-Ann Harvey wants for the Bavaria 40 cruiser School’s Out that owner Adrian Wotton delivered to Melbourne for the women’s regatta.

“We are a heavier cruising boat so we’d rather have a bit more wind,” Harvey admits. “It’s not looking like our best conditions but we’ll have tons of fun and get some experience, and maybe next year there’ll be more wind!”

First-time regatta skipper Harvey and her crew from the Cruising Yacht Club of South Australia were encouraged to put team together by the AWKR regulars and fellow South Australian sailors who have campaigned the Melbourne based Bavaria 38 Mrs Overnewton for many years.

Tasmania is fielding its usual strong contingent, led by skippers Colleen Darcey and Judi Marshall. Darcey has an excellent AWKR record including winning all three handicap categories with the chartered Archambault 31 Penfold Audi Sports in 2012. This year’s she’s skippering an Archambault 35 called Absolut.

Many of the Tassie sailors are regular crew and helms among Hobart’s big fleet of SB20 sports boats preparing for the SB20 world championship on the River Derwent next January.

Joining Darcey’s crew of 10 this weekend is AWKR first-timer Jo Breen, who has signed on for next year’s double-handed Melbourne to Osaka race.  Breen worked as a delivery skipper, clocking up close to 30,000 nautical miles including delivering solo a 28-footer from the Azores to the UK, until joining the Tamar Yacht Club as sailing manager a year ago.  She’s entered her S&S 34 called Morning Star in the 5,000nm Osaka odyssey and is getting on with the completion of a huge refit including new mast, rudder, electronics and sails, in time for the race start next March.

“I'm really fortunate to be a part of the Tassie team this year, having met Colleen and many of the other team members through the SB20 racing in Hobart,” Breen said. “It’s been a great experience training and racing with these talented women and this weekend is a fantastic opportunity for us all to come together from the various yachts we usually race on.”

RMYS on St Kilda’s foreshore will host local and visiting crews and coordinate the 27th edition of the traditional long weekend schedule of racing and social activities. An AWKR briefing commencing at 1900hrs on Friday June 9 at RMYS will open the program and following Saturday’s races the club will host a large-scale dinner function. Monday’s trophy presentation straight after the completion of racing will mark the final organised event.

The long weekend forecast is for light winds south to south-westerly 10-15 knots decreasing to about 10 knots during Friday morning then on Saturday winds are likely to be variable below 10 knots.

The AWKR runs on the principles of generous owners, mostly RMYS members, loaning their boats for the weekend, encouraging and developing women in the sport, and fun. Two races are scheduled to start daily from 1000hrs to the west of the St Kilda breakwater and east of the shipping channel.