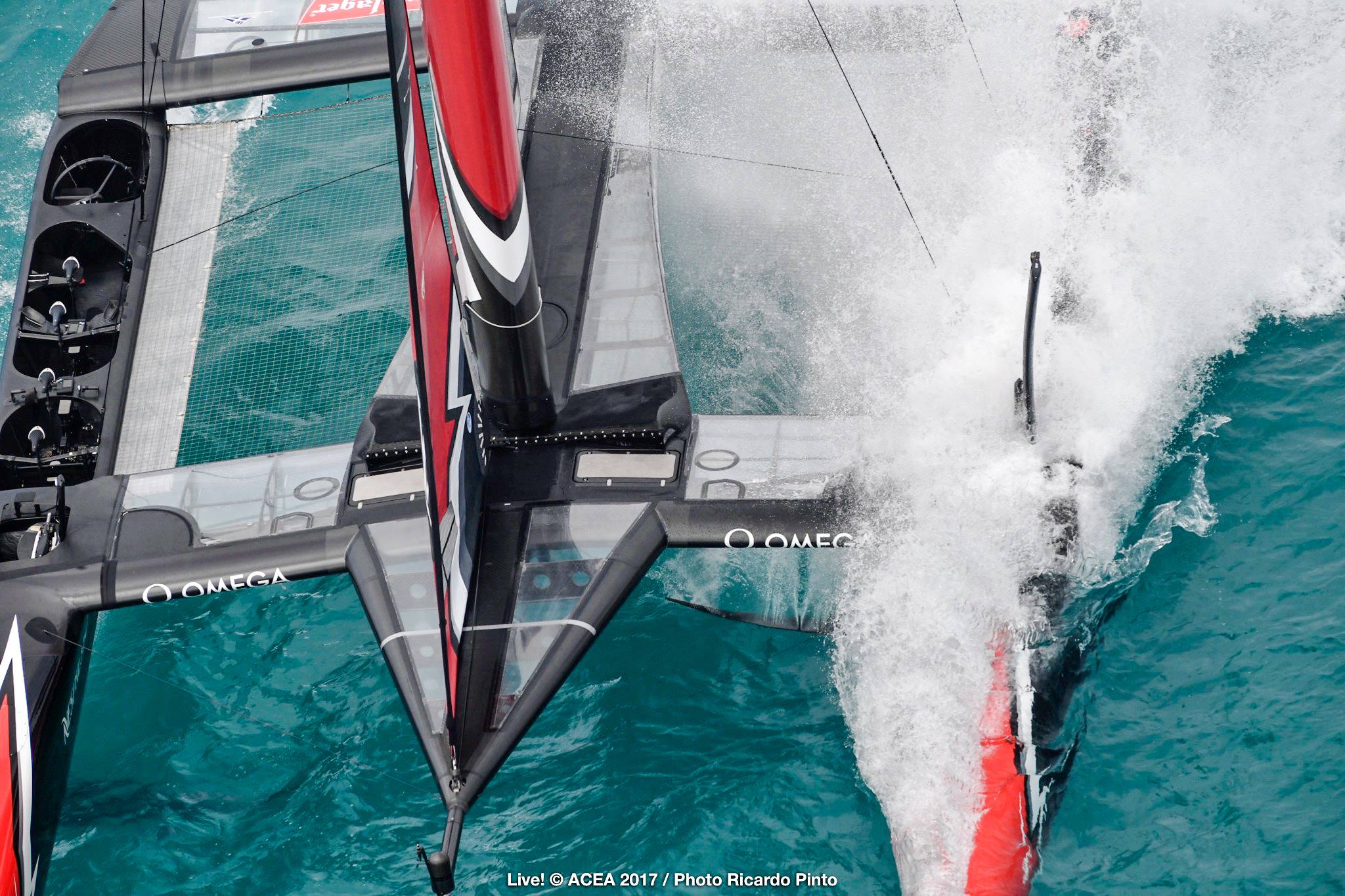 ETNZ on their way to a win in the Challenger semi-final. Photo Ricardo Pinto/ACEA.

After the crazy conditions of Tuesday which saw Team New Zealand pitchpole and the postponement yesterday because the wind was even stronger, today dawned with more manageable breeze for the 35th America's Cup challenger semi-finals. It started at around 16 knots and eased during the racing to around 11.

The big question at the start of the first race was whether the Kiwi boat would hold together. All the electronics had been soaked in salt water during thecapsize and immediately there was a problem. The port side daggerboard popped up during the pre-start, slowing the boat and allowing Sir Ben Ainslie to take a huge 26 second margin at the reach mark. He held the gap down wind but on the beat the Kiwis' superior speed started to show.

They closed to 11 seconds at the top, gybed to set up a split at the bottom and it was game on.

When Ben dunked his bows on a tack, the next cross was close, then a perfect foiling tack by the Kiwis on to Starboard saw them take the lead at the next cross. Again the British tack was sloppy and the Kiwis had turned a deficit into a 21 second lead at the final top gate. From there they sped away to finish 31 in front. It was 4-1 in the first-to-five series.

So Sir Ben Ainslie was facing match point with a slower boat. The most decorated Olympic sailor of all time would need all his experience and skill to stay alive.

During the pre-start Peter Burling threw three feinted hooks before going for the superior position, hoping to loop around on the reach with superior speed. But Ainslie was able to keep the overlap and gybe 80 metres in front.

The Kiwis seemed content to follow the British boat, hoping to use their superior speed to fly past. But Ainslie and his crew were having none of it and kept their boat on its foils the whole wa around the track. At times the Kiwis seemed to be having daggerboard issues and coudn't find their usual smoothness through the tacks.

They tried everything they knew, but Ainslie stayed doggedly in the lead, hanging on to his last chance to stay in the Cup. On the final reach he extended away and won by 20 seconds. The gap had closed to 4-2 and at least one more race was required.

The pre-start saw plenty of games and Burling, trying to sit right in front of the Brits, had to burn some speed but timed the gun perfectly. The British, needing a great start, had a terrible one.

The lead on the run was around 125 metres and with a faster boat, the Kiwis were looking good. To date they have not been beaten when leading after the first run.

A split at the bottom gate was Ainslie's only chance but the gap was growing as the Kiwis got a nice wind shift out to the left. The margin at the top of the course was 32 seconds and now it was a bridge too far. The race became a procession and three legs later, the British were out of the event. They fought hard to the end, but with an inferior weapon there was no way they were “bringing the Cup home”.

Ainslie revealed that Land Rover BAR will be back for the next instalment of the America’s Cup after agreeing deals with their major partners. “To have that commitment already in place is a massive bonus for everyone and to be able to start our preparations for the next campaign already means we will come back that much stronger,” he said.

In the second semi-final it was Sweden, with Australia's Nathan Outteridge at the helm, which was facing eliination after a lack-lustre performance in the strong winds of Tuesday.

Dean Barker went hunting on Team Japan but Outteridge held him out. Barker was a split second early and had a two boat length penalty to burn off. Outteridge swept around the reach mark 4 seconds ahead.

From there it was an old-fashioned match race, with Outteridge covering every move and not giving the Japanese boat a chance to find a lift or better pressure. With boat speeds almost exactly the same, the leading boat was in charge and Outteridge covered his way to the win. It was 3-2, a fair indication of how close these boats are.

Outteridge again won the start, forcing Barker into a position where he was slow and pinching to make the line. This allowed Artemis to reach away at a great angle and round the first mark 10 seconds in front.

By the bottom gate they had created a huge gap, sweeping around on the foils and at speed. Barker followed up the right hand side.A messy tack cost even more distance while the Swedish boat was still perfect.

With Artemis content to sail their own race, Japan had a small lift and closed, but the margin was still comfortable. All looked calm on the Swedish boat. “Good gains” called Iain Percy, the Artemis tactician, as a right-hander gave them a lift.

At the top mark the margin was 12 seconds and Artemis was again sailing a more direct line towards the bottom of the course. A huge spectator gin palace hurriedly motored off the course as the gates were shifted to account for a wind swing. At the newly-placed gates, Japan split to the right but a slight left shift favoured the blue boat.

“Hit them hard!” called Percy as the Japanese came back across and Outteridge tacked right on top of them. Wind wash caused Barker to tack away. Artemis was in control of the race.

The grinders, who had been working at around 95% of maximum heart rate, could slow their pace slightlywith just one more tack to the top mark. The margin was a comfortable 18 seconds and now there was nothing left that Barker could do. A 360 metre gap was too much, especially with the wind still going light and Artemis had tied it all up at 3-3. Racing would continue tomorrow.

Hostilities again began at the one minute mark and again Outteridge was keen to lead the way. With time to burn off, he was forced to slow and Barker went inside. Both boats were quickly up to speed at 35 knots and Team Japan had just enough to maintain an overlap at the reach mark and carry a small lead down the run.

The boats were side-by-side as they went through their second gybe, with Barker still in control. Artemis had to throw in an extra gybe to create the split at the bottom gate and the Japanese boat was suddenly 100 metres ahead as they tacked up the course.

A slight left shift favoured Artemis but it wasn't enough to get the lead. They were again forced to do an extra tack and the margin was 12 seconds at the top gate.

The second run saw the boats split to opposite sides and the margin was cut to 8 seconds. Again they went different ways up wind. Artemis got the right-hander they were seeking and came across on starboard, forcing Barker to duck them. He was on starboard into the mark but Artemis got into the zone first and drove straight at Japan. Barker was late to bear away and after Outteridge and Percy pleaded with the umpire, the blue light came on – Barker had to slow down and give Artemis a two boat length lead.

It was the key moment of the race, putting Artemis in front for the first time and they took full advantage. By the time Barker was back up to speed the Swedish boat was gone – sweeping across the finish line 1 minute 46 seconds ahead to go to match point. They had turned a 3-1 deficit into a 4-3 lead in a single day.

We will be back tomorrow to decide who meets the Kiwis in the Louis Vuitton Challenger Final.