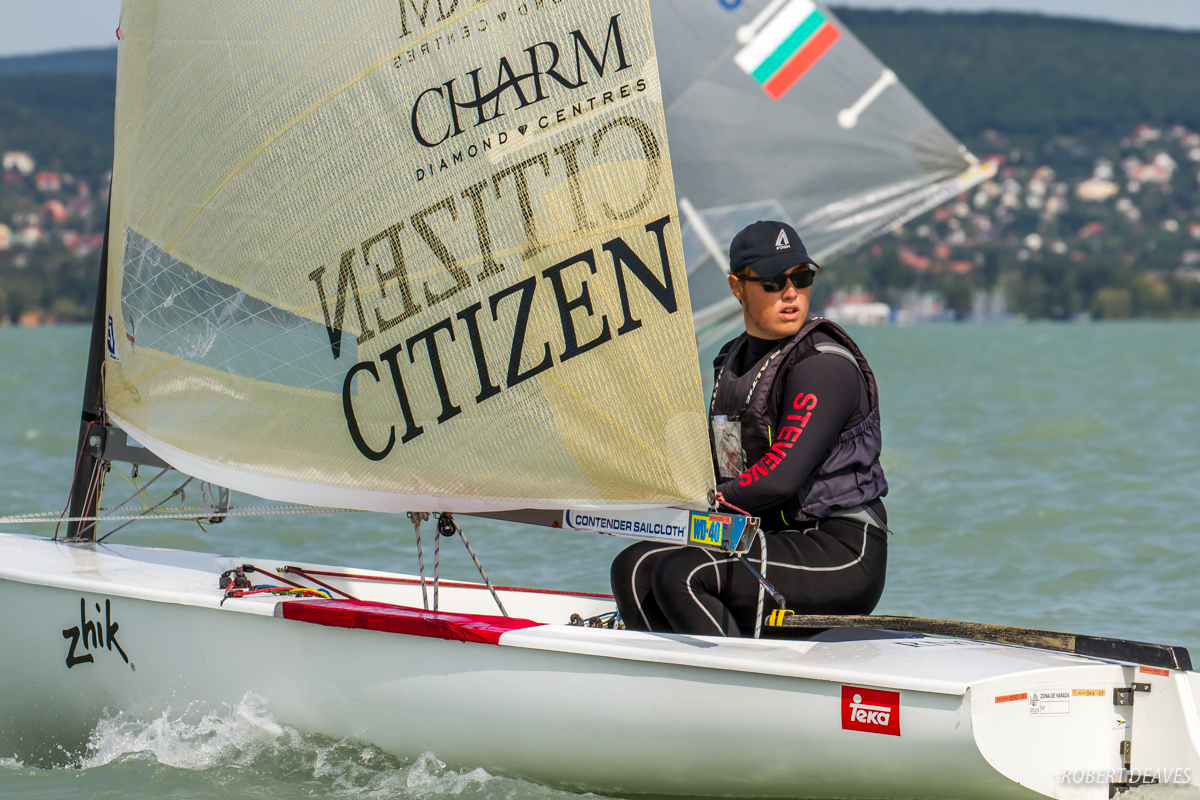 A hot, hot day in Balatonfüred at the U23 Finn World Championship and despite being sent out in a light breeze mid-afternoon, wind evaporated very quickly in 35 degree heat and race officials sent the fleet home less than 30 minutes after arrival and the lake remained like a mirror thereon in.

Sunday is the final day of racing with two races scheduled at the earlier time of 08.30 to try and make the best of the wind. The forecast predicts wind from 08.00 to 11.00 and with a cut off time of 15.30, this could be the only window for sailing all day.

Of the many sailors here sailing their first major regatta, Joan Cardona Mendez, from Spain, has put together some good results, though he was one of the UFD casualties yesterday. Like most of the sailors here he grew too big for the Laser and saw the Finn as his only option. “My physical conditions made me think the Finn is my best option.”

Before that he sailed Optimist and Laser. “Last year I was second U19 in the youth World Championship and third in the Europeans.”

He only started sailing the Finn one month ago. “The Spanish Federation lent me the boat. My club, Real Club Nautico de Palma, gives me a lot of support and I am where I am because of them.”

“I have been training with this boat only for the last month. I have been in the Dinghy Academy in Valencia during the past four weeks. This week if I make top 10 I will be very happy.” Long term, “Of course I like to imagine Tokyo there in the future.”

“I am discovering the boat and I like it. Much more technical than a Laser.”

The conditions so far on Balaton are perhaps playing to his strengths. “I have been sailing since I was seven. I went to the Europeans and World Championships in Optimist very young and in Laser every year since I started in the class. My experience in international events can help. I am fighter and persistent.”

Cardona is also one of three sailors who will form a small group reporting to the IFA Executive Committee on matters relating to the U23 events. He has four years left as an U23 sailor and along from Cameron Tweedle, from Britain, and Jock Calvert, from Australia it is hoped they can bring an U23 perspective to the International Executive. On Friday morning the sailors held an informal meeting to discuss future plans and events.

Another new Finn sailor, Gordon Stevens from Canada, has been training at the Dinghy Academy in Valencia prior to the Silver Cup and is in 30th place, just outside his goal of placing in the top half of the fleet.

His prior sailing experience includes Optimists, 420s and Laser, but as he continued to grow the Finn became the best option. “I was too big for the Laser and I always wanted to sail the Finn since I first saw videos of it.”

“My long term goals are to make the national team so I can get some support to help pay for the expenses of training and competing in Europe.” At the moment he just “gets some gym time with a trainer for being part of my provincial team.”

“This summer I was training with the Dinghy Academy, but during the school year I am mostly training at home in Nova Scotia either on the water by myself or with one of the Laser groups and their coach.”

He considers his strengths to be “…none free pumping downwind because I find I have a good feel for the wind and also find I am often passing boats in these conditions.”

“But the part of Finn sailing I enjoy the most is the physicality of it. I really like how on free pumping downwind you are able to put as much effort into pumping the boat as possible, which I think really separates this class from others.”

Finn sailing often runs in families and one case in point here this week is Taavi Valter Taveter, son of double Olympian Imre Taveter, from Estonia.

“I started with Optimist and also did Laser. I did some big championships in the Optimist, which were really good training in Europe, but in the Laser I sailed mainly in Estonia in smaller events.”

He is now 100 kg “Then I got too big for the Laser but I still wanted to sail a one man boat.”

He aspires to follow in his father’s footsteps, who is coaching him as this week. “I would really like to go to the Games for sure. He is a really good coach and I get a lot of good tips from him.”

Earlier in the year he placed second at Warnemunde Week, sailed in stronger winds:
“In Warnemunde it was a good regatta. But here there are many good sailors, so my expectations are not that high. I have not done so well so far, but I would expect to do better if it was breezy because I think I have quite a good physique and I hike quite well.”

It is a big ask, but he has already set his sights on Tokyo. “There are three years before Tokyo, so I hope to make some big steps in my development and then maybe I’ll be able to go to Tokyo.”

But in the immediate future he is also preparing for his first Finn Gold Cup next week just across the lake at Balatonföldar. “It’s a big event with many boats and will be a great experience for me.”

“I think upwind hiking is my biggest strength at the moment. I still need to do a lot of work on my downwind free pumping. Earlier I had some good starts, but this event I haven’t been that good to be honest. I really like the physical part of Finn sailing when the breeze is on and the free pumping. My speed is not there yet in the light winds. I am still looking for the right trim for the sail and the mast angle but in stronger breeze I think I am going a good speed.”

As this championship draws to a close, these three sailors, along with the 42 other young Finn sailors, the stars of the future, have one day left to impress.