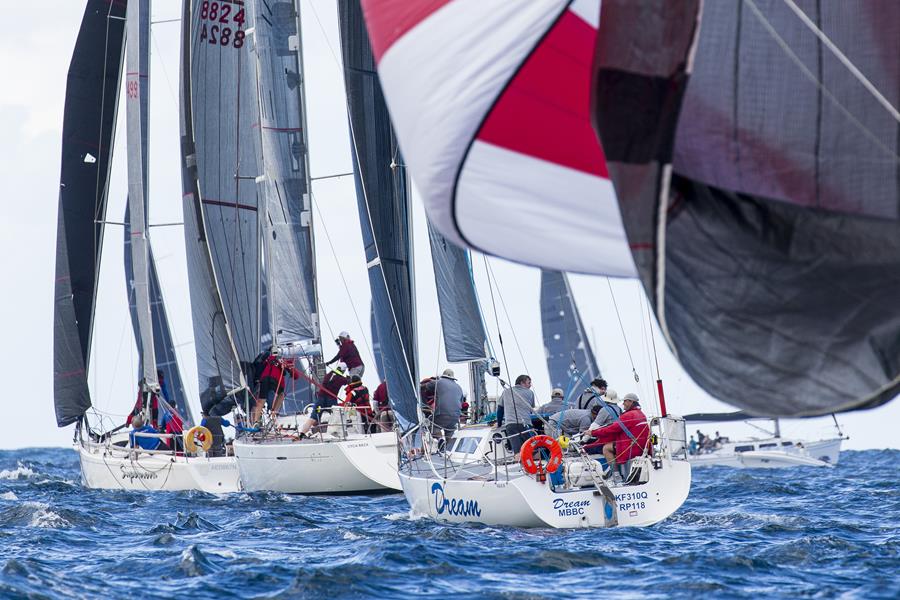 Dream, an Inglis 38, has not trodden the well-worn path south to Hobart before, but the Beneteau First 45, Banter, has been south once before. With a previous owner in 2012, the formerly named Carbon Credits finished 44th overall, but this is the first time under the name Banter, and with her latest owner.

Jacobsen says of Banter’s crew for the 2019 Rolex Sydney Hobart, “They are a group of mates from the Sunshine Coast who all have a passion for sailing and fun.

“We all enjoy the competitive side of offshore racing, but don’t take it too seriously,” Jacobsen remarks.

Banter and her crew are representing Sunshine Coast Yacht Club, and aboard is Piers Dudin, who is predominantly known to the race and the CYCA through his first participation as a skipper in the Clipper Round the World Race in 2013. A repeat offender, he is coming up for his fifth Rolex Sydney Hobart and is among the most experienced on the boat.

“But most of our crew are first timers to the Rolex Sydney Hobart. We also have a father and daughter, Greg and Mikaela Sanderson, within our team. Our main reason as a crew to compete this year is because it’s been a lifelong passion to be part of such an iconic yacht race.

“It’s also something to tick off our bucket list, with many more to come in the future,” Jacobsen says. “But this being the 75th Hobart will make it all so memorable.”

Although this is their first foray into the Rolex Sydney Hobart with Dream, Craig Salter’s crew has been ocean racing together for many years.

According to Salter, from Queensland Cruising Yacht Club, “We decided two years ago that we are doing the 75th Sydney Hobart. It will be a great honour to sail up the Derwent on my own boat with my son Ashley and great friends on board.

“We’ll be welcomed into port by family and friends who will be awaiting our arrival at Constitution Dock. It’s the place I grew up watching many Sydney Hobart finishes with the dream of skippering my own boat in the great race one day,” Salter explains, adding that it is the reason for naming the boat ‘Dream’.

Dream will sail in PHS, so is not eligible to win the Tattersall Cup, which is reserved for those sailing in IRC. However, should the race feature a lot of downwind conditions, this Inglis 38 will be at her best. She was designed by Greg Inglis as a downwind flyer, and her small 38 foot frame belies her power when let of her reins off the wind. Should that happen, she will be Queen of the PHS class.

There are some Queensland boats among the favourites to win the Tattersall Cup. High on the list is Barry Cuneo’s TP52, Envy Scooters. Cuneo is the nephew of the great John Cuneo OAM, who skippered a Dragon keelboat to Olympic Gold at the Munich Games in 1972. He also sailed on Southern Cross, a challenger, in the 1974 America’s Cup, so sailing runs thick in the veins of this family.

Envy Scooters won the Brisbane Gladstone Race and the Noakes Sydney Gold Coast Yacht Race this year, so she is in great form. However, the TP52 will have to outclass a field of strong contenders in the TP52 class alone, including the 2017 winner, Ichi Ban, which has gone on to top the leaderboard in many races and events.

In his efforts to win the 75th Sydney Hobart, Cuneo has co-opted the services of some top line sailors, including Spanish Olympic Finn medallist, Rafa Trujillo and past America’s Cup bowman, Peter Dowdney, among others.

However, as all experienced Rolex Sydney Hobart sailors will tell you, there is a combination of things that you need to win the race; the right crew, a boat that makes it to the finish line, the weather pattern to suit – and a bit of luck. Only time will tell…

For all information, please visit: www.rolexsydneyhobart.com.