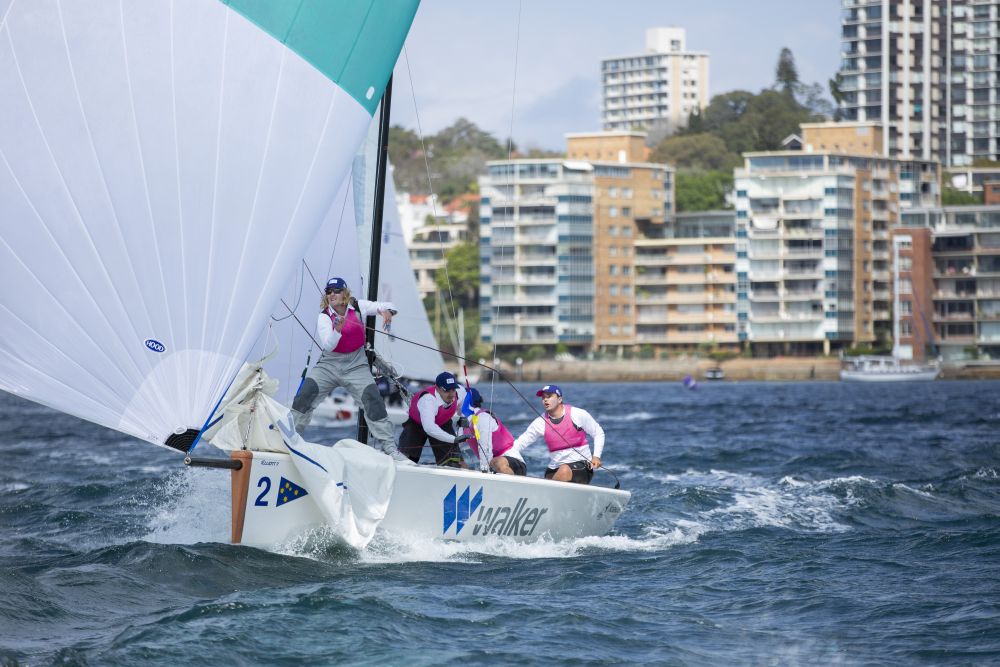 Before the day commenced, Hodgson entered his semi-finals as the underdog, having been left to race Royal New Zealand Yacht Squadron’s Jordan Stevenson when regatta leader, Harry Price and his DownUnder Racing chose to race Klade Hauschildt from Noosa. Having lost both their round robin matches to Stevenson, Hodgson, representing Mooloolaba Yacht Club, dominated the morning racing series to sail into the Finals in a clean sweep, 2-0.

In the moderate, building southerly breeze, the Queensland team used the extra few kilograms of crew weight to their advantage on the windward legs, then consolidated on the downwind legs. In the other semi-final, Harry Price and his DownUnder Racing team continued their unbeaten winning streak all the way to the Finals, defeating Klade Hauschildt in two decisive matches.

Spectators were in for rare treat for match racing, with Noakes Group kindly donating their Rosman Ferry, “Royale” to the Cruising Yacht Club of Australia for the Final Day. Over 60 guests were able to watch the Finals action as Queensland took on New South Wales.

Having joined and trained out of the CYCA Youth Sailing Academy for the past eight months, Hodgson expertly manoeuvred their Elliott 7m in the opening two pre-starts. This gave Hodgson the early advantage in each race, and again used his heavier weight to his advantage on the upwind legs. Price, currently World #8, held in on each race, successfully rolling Hodgson on the final run of Race 1 and looked almost certain to steal the opening race. But as both boats approached the pin end of the line, both boats gybed onto port with Price running up the back of Hodgson who slowed during the manoeuvrer.

Race 2 again saw a very close battle with Hodgson showing superior speed on the upwind legs, but DownUnder Racing excelling downwind. But on the final run again to the finish, Hodgson was able to defend his lead after a 40 degree left shift made it almost a lay through to the finish.  This saw Hodgson on match point against the former World #1.

Race 3 saw Price usual pre-start aggression come back to life, Price dominating the sequence to lead off the line. In a close battle upwind, Price penalised Hodgson on the approach to the windward mark and stretched around the course to win by the biggest margin in the Finals.

With Price regaining his winning ways, but still in a do or die scenario, both teams fought extremely hard to hold control of the race. After an extensive tacking duel up for the first windward beat, Hodgson rounded a length in front with Price ready to pounce yet again.

Unfortunately for Price, in a spectacular scene, the spinnaker halyard snapped clean in two once the spinnaker filled, dropping the spinnaker instantly in the water. The gear failure allowed Hodgson to smoke away downwind to an unassailable lead.