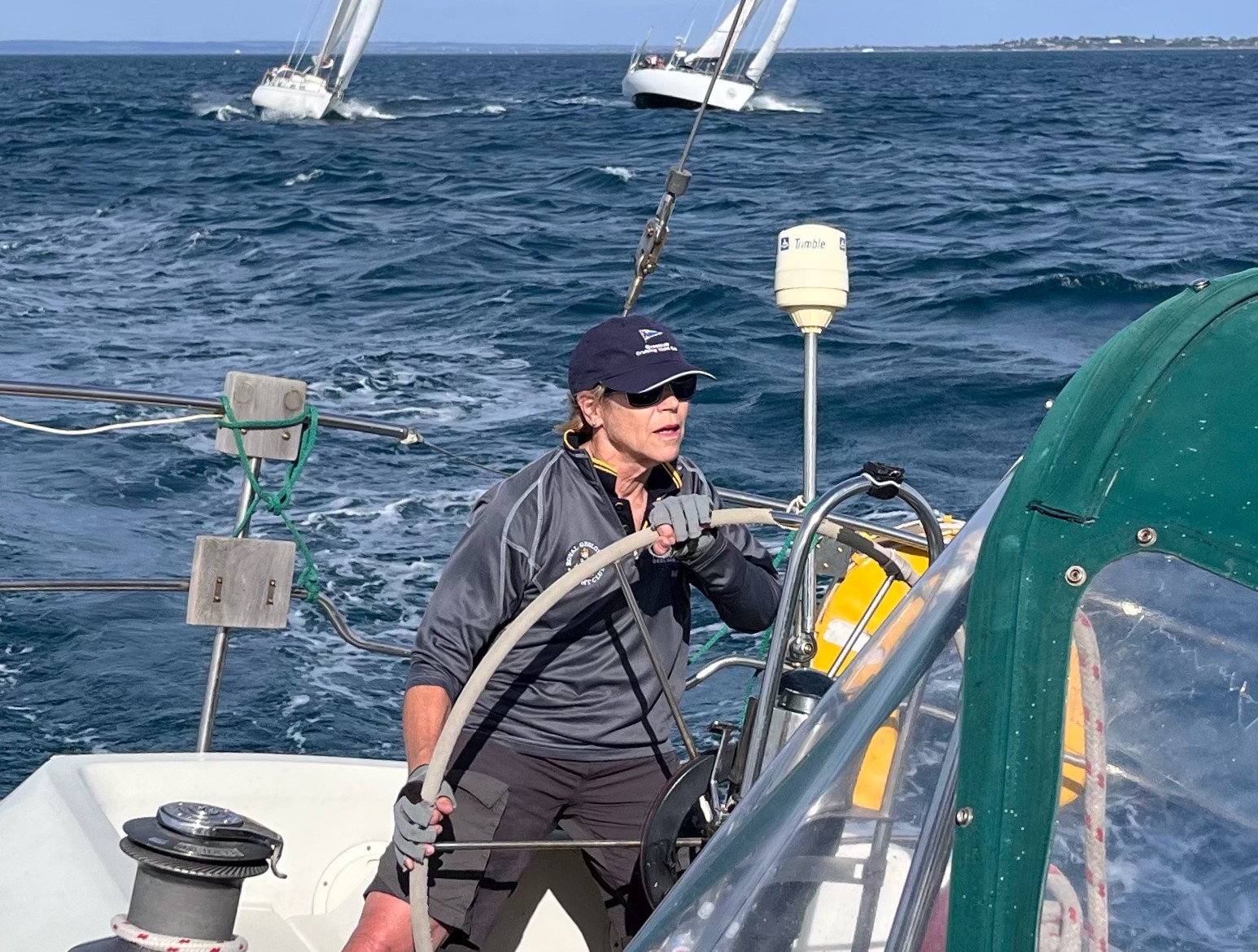 Commodore Lee Renfree at the helm.

Victoria: Queenscliff Cruising Yacht Club (QCYC) hosted their annual Queenscliff Cup Regatta over the Easter long weekend with the inclusion of a two-race series for female helms within the racing program, the inaugural Commodore’s Trophy.

QCYC was a hub of activity with an armada of yachts occupying fully booked wharf berthing and members and visitors busy around the club on many fronts.

On the water, the four race Queenscliff Cup racing program provided a variety of short and longer courses and actively encouraged inclusion amongst the crews participating.

Race 1 commenced on time at 1100hrs with a short warm up race around the sticks. This then allowed time for Race 2, the Queenscliff Lonsdale Yacht Club (QLYC) passage Channels Race, to take advantage of the changing tidal flows for the leg north to West Channel Pile and the passage back down the Coles channel, with the light northerly gradually clocking east.

Sunday 17 April was scheduled with Races 3 and 4 mandating a female helm nominated from each boat’s regatta crew, who were additionally scored for the Commodore’s Trophy. A forecast for an early strong wind warning, delayed the start to 1300hrs but did not deter the keen female helms from tackling the somewhat bumpy sea state and blustery 22 knot northerly winds.

QCYC Commodore Lee Renfree joined the fleet for the weekend on board DreamCatcher. She was thrilled with the outcome of the weekend activities. “The new initiatives for the Queenscliff Cup event were very successful in getting more female crew onto boats,” Renfree said. “Boat owners provided outstanding support with 70 per cent of boats entered for the Queenscliff Cup meeting the criteria for the Commodore’s Trophy and handing over the helm to the women for half the regatta.

“Thanks also to Club Captain Michael Phelan for his support in enabling the new inclusive program where open helm and female helm races are split 50-50 with all race results aggregated for the overall score.

“With the female focussed QCYC KISS (Keelboat Introduction for Sailing Savvy) program to be launched 17 May with partners Ocean Racing Club of Victoria (ORCV) and AS She Sails Victoria, there will be support provided for more aspiring female sailors to step up confidently to lead roles on boats and participate more fully in future events.”

Congratulations to all competitors for their participation and achievements.

And while the sailors were racing, the onshore volunteer members were not idle, joining forces for garden maintenance on Saturday, manning the bar and cooking a fabulous roast dinner for 80 people on Sunday!  Thanks to all the volunteers who contributed an inspirational effort to welcome and include one and all to their club.

The KISS training program will be open for registration from 1 May 2022 with first webinar on Tuesday 17 May. Further information on the KISS Program is available on the QCYC website.