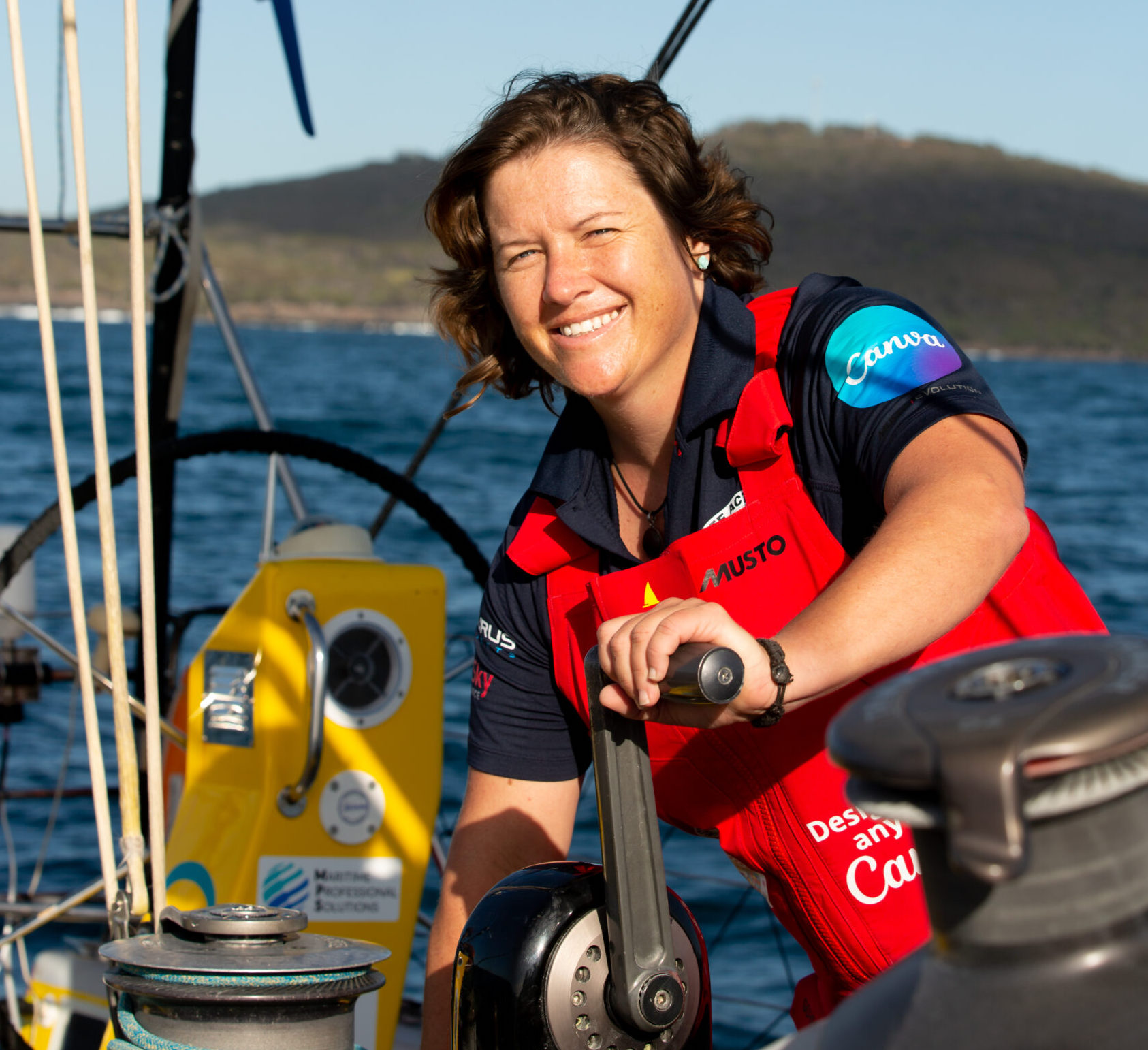 In her latest blog post, it was a typical day aboard Climate Action Now for Blair, changing micro plastic samples and sails. Blair’s mother also analyses a decline in iceberg observations on the current voyage compared to Fedor’s Konyukhov 2008 attempt and Blair’s 2017 attempt.

Well last night was a night of broken sleep. I managed to get to bed at 2am, but I needed to wake up at 4am to complete the micro plastic sample change. I did this with bleary eyes before diving back into bed for another 1.5 hours of sleep and again waking to complete the second sample change. If you remember, we are running a 100-micro filter for two hours to get a better point size reading and then I switch this out for a 500-micron filter that we run for the next 22 hours to give us a broader data set.

So far, I have collected over 125 samples. They will all be sent to my research partners at the Australian Institute of Marine Science who are working in collaboration with IMOS so upload and share the findings out.

After the second sample change it was 6am and the sun was just starting to try and peak though the grey skies, but the cloud cover was just too thick, so it just became a dreary dull sky. I was planning on going back to bed, but it was freezing out, so I decided to re-heat the hot water bottle and while I was waiting for this, I felt hungry. I decided to make some porridge for breakfast and then go back to bed.

I read my book for a bit while I ate, and the winds were still holding at 25 knots so Climate Action Now’s sail arrangement of two reefs in the mainsail and the storm jib was holding well.

With a fresh hot water bottle shoved down my vest and a full belly I climbed back into bed with the intention of trying to get some sleep. I felt a little too wired however, so I found myself struggling to get comfortable and tossing and turning all around in my little bunk.  By 10 am I finally managed another 1.5 hours sleep before the boats auto pilot alarms started going off again.

Looking over at my B and G Zeus display that I have near my bunk, I could see that the winds were getting up to 30 knots and building towards 35 knots of wind. This meant we were getting too much wind for the sail plan and unfortunately, I needed to go on deck and put the third reef in the main sail.

I was expecting a front to pass tonight associated with a passing low pressure system but I still wasn’t sure if these winds were the ones or if this was just a small squall, so I ended up waiting for 30 minutes before actually getting up to be sure. The worst feeling is when you climb from your nice warm bunk out on to the cold deck to put in a reef because it’s too windy, and then 10 minutes later you are back on deck shaking it out because the winds were a temporary thing, so I was trying to avoid that by making sure.

Yep the winds were here to stay and were now keeping well above 30 knots most of the time, so I decked myself out in my Dubarry boots, and Musto base-layers, mid-layer jacket and life jacket and went on deck.

It was cold on deck but nowhere near as cold as it had been so while I started with gloves on I ripped them off after a minute to allow me the freedom to handle the ropes easier.  I didn’t get too bad a cold burn from it, so I am calling it a win. The seas were a frothy mess of six metre swell and the waves were already breaking, taking us along for a wild ride, surfing along at a 20-plus knot speed regularly.

I love going fast and letting Climate Action Now fly along, but this swell was too unpredictable and messy, so we were wiping out more than getting wild rides, so I set about putting in the third reef in the mainsail. This basically means that I lower the sail a couple of meters and then tie it off using the reefing lines that run through the boom and up the front of the sail to secure it down before winching the halyard (rope that pulls the sail up) back up to tension everything.

It only takes me around 10 minutes to put a reef in and once I was done, we were wiping out a lot less but still getting the occasional shove from an awkward wave.

It was 1pm by the time I was finished so I returned below. Feeling the need for a distraction as much as a pick me up, I set about making some pancakes. I love a good pancake, but I am not normally cooking them while riding a roller coaster, so it was a bit of a challenge. It was difficult to prevent things like the butter tub or the jam jar from leaping off the counter when I wasn’t looking. While it was difficult conditions to be making them in, it lifted my spirits.

The conditions have remained the same all night with winds between 30 and 35 knots and Climate Action Now seems to be handling it all well enough. The winds were forecast to be blowing in from the WNW or W direction however they have swung down to the 250 T or WSW direction making it a little tricky to hold the course that Bob (metbob) suggested.  We are intending to climb quite high to get above this next bit of swell, but I wasn’t aiming to go quite as sharply.

I am hoping that the winds swing around a little more to the west throughout the night, but no matter,  I will be gybing when I hit 47.30S anyway and my front is due to hold until tomorrow morning where I will be due to gybe to the starboard tack as the winds will be swinging further to the SW.

Aside from that everything so far seems to be going well and we are honking along towards the Indian Ocean which is coming up fast. I am going to try for a slightly earlier night and see if I can manage a good night’s sleep.  Before I go, I want to take a moment to thank the following amazing degree sponsors.

012 East – Glass Australia P/L – Thank you to David, Shelia, Claire and Renee Weatherly for being such amazing supporters of this project with your 9 degrees in total. I can’t thank you enough.

015 East – d’Albora Marinas – Akuna Bay, Pittwater, NSW – Huge thank you to d’Albora Marinas for your support.  d’Albora Marinas Akuna Bay is one of the loveliest marina locations right in the middle of a national park with deep water access, dry storage, function room and coffee shop and if you live in the Sydney area it is well worth a visit.

You will notice on the tracker that both Fedor and Lisa’s 2017 attempt are hugging the northern boundary of the racetrack at this moment. In both instances this was to avoid icebergs. During Fedor’s 2008 attempt he had many icebergs to contend with. He physically saw many starting from well before Cape Horn.

During Lisa’s 2017 attempt, nine years after Fedor’s, she only had one iceberg of concern.

During Lisa’s current 2022 attempt there have been no icebergs of concern which is why she was able to simply continue her preferred track.

I am no scientist, and there are probably contributing factors, but in my eyes, it strongly supports the case of a warming planet.

I have included some excerpts from Fedor’s and Lisa’s blog from around this time for those who are interested.

Another large iceberg sited in position 54.99S and 122.73W. It’s becoming very scary to sail in these waters. The situation is also complicated by Cape Horn ahead. Icebergs are a great threat to the boat and to avoid or minimize this threat I need to come up North, but instead I must sail south towards Cape Horn. Drake Passage is the only gate form me to get into the Southern Atlantic Ocean. I need to dive south for another 150 miles to clear the Cape and I was progressing SE all night until we met iceberg number four.

Now we have headwinds from ESE. I have tacked and have come up onto NNE heading until the wind shifts to the west. Lee Bruce wants us to be on 56S by tomorrow to have the best set up for Cape Horn, but I am holding 54-55S due to the ice conditions. The 10mm alloy plate on my boat is not the best shield from compressed ice.

When I met the first iceberg, I was excited as this was something new and a different shape on the horizon. The second and third icebergs bought some safety concerns and today’s icebergs gave me confirmation that we are in a belt of icebergs drifting up from Antarctica. It seems we are surrounded by drifting ice traveling NE and we are crossing their way sailing SI. I can assure you that it is very hard to spot icebergs on the radar. All four were spotted visually.

It’s quite stressful knowing that there are icebergs around, and even though I have not seen one, with the data provided by C-CORE it gives a very clear picture that from 30W to 15E we will have to sail with great caution to avoid floating ice. I feel like I’m on a minefield – no room for a mistake.

C-Core have been doing a great job of keeping me informed on where the icebergs are.  The closest one to me at the moment is over 400nm away.  That’s not to say that the smaller burg bits and growlers (small chunks of ice) aren’t traveling much further north, so I will be keeping a very close eye on my sea temperatures over the next 2 days. I am currently sailing in 11.1 degrees’ sea temperature, so I am in a hot water current, because yesterday I was sailing in 5.2 degrees sea temperature…

I expect over the next two days for the seas temp to drop again and then once I am clear of iceberg alley it will rise back up to seven to eight degrees.

Bob has me going north to the top boarder of 45 South. We will try to keep 30nm away from the edge.  The main reason that I need to go so high is that the storm that is passing me today will be generating some rather large swells. By getting north we will manage to get around most of them.  The other unintended reason is that we have received the latest iceberg report from C-Core and I was quite surprised that there are still icebergs so far north in this part of the world.

I am now clear of iceberg ally, but the latest report still has several icebergs around 50 S and 4 W. I really thought that the rest of the bergs would be further to the south passed iceberg ally, so it is fortunate that I was already planning on sailing NE to get around that swell.  Now, we also need to stay to the north for a while until I clear the rest of the icebergs.