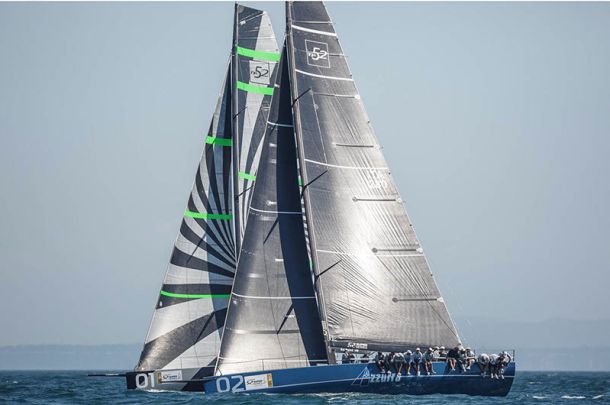 Cascais, Portugal is set to be painted a particular shade of blue tonight after Azzurra are crowned the 52 Super Series champions of 2015. The team which wears the colours of Sardinia’s Yacht Club Costa Smeralda eclipsed Quantum Racing over the five regattas circuit which started in May in Valencia and finished in typically perfect Portuguese sunshine.

Gilt-edged consistency has been the biggest single factor in the Azzurra title win. Skipper Guillermo Parada points to a pledge made at last summer’s Copa del Rey to make a step change for the 2015 season in order to secure more regular results.

They have raised their game in every area as evidenced not just by their tally of 12 race wins from the 46 race starts over the five venues, but they only visited the basement placings twice over the season, one ninth in Valencia and their biggest wobble – as they clinched the title yesterday – one 10th place.

Key personnel changes which have contributed to their winning set up have been bringing in Giovanni Cassinari as mainsail trimmer, thereby adding a second sail designer to their team as well as a world class sailor, Kiwi America’s Cup winner Grant Loretz as headsail trimmer – whose Anglo Saxon, steadying influence has been the ‘glue’ which has held the team on winning form according to Parada and bringing in performance coach Marco Capitani to develop a much more empirical approach to data collection and analysis. But the core of their team dates back to a bunch of young Argentinian guys who Alberto Roemmers Sr put his faith in more than 20 years ago.

Azzurra only finished off the podium in Valencia where – in fourth – they were still the team which won most races. They won the Settimana delle Boche regatta on home waters in Sardinia, triumphed in the World Championships off Puerto Portals and second in Palma and Cascais.

Their average score over all the season’s races is 3.8pts.

There was no mistaking their joy as they arrived back at the Marina de Cascais, Parada grinned:

“It’s been a long way, this is something that we planned many months ago, we have worked very hard and somehow we have over-achieved our target so because winning at home in Porto Cervo and winning the Championship, winning the season with a race to spare, winning the last race of the season, winning Palma Vela, I think it’s been a great season for us and this is something we will remember for a long time. Obviously we have to thank the Yacht Club Costa Smeralda for their support. Having their colours on-board is something we take with a lot of responsibility and a lot of pride. We are also very grateful for the whole Roemmers family and especially to Alberto senior who gave us a group of young Argentinians 20 years ago the chance to be what we are now. And for sure he has changed the history of sailing in Argentina.”

“The reality is that we are a complete team, the shore crew are part of our team.They suffer when we have a bad day and they enjoy it when we have a good day so all in all we are very close together.“

Second overall for the season Quantum Racing have profited from integrating owners Doug and Dalton DeVos into their sailing programme, the father-son duo sharing the helm across three of the five regattas, culminating in their win at Copa del Rey in August. But the 2014 champions drew level with Azzurra today in terms of regatta wins when they added the Cascais Cup title, thanks to a great last two days. They finished with a consistent string of 1,3,2,3 from the final four races of the season to sign off their 2015 with an important morale boosting finale, leaving the new 2015 champions trailing in their wake eight points behind. In effect Azzurra had their highest scoring day of the year as they dropped over the championship winning finishing line Saturday just as Quantum Racing raised their game on cue to win in Cascais.

“It is great to finish the season with back to back regatta wins. Last couple of regattas we have really shown our true mettle. It was good winning the Copa del Rey and here we have sailed very consistently and ended up with a nice eight point lead at the end. Our goal today was two solid races and we achieved that nicely- a second and a third, a few more points on Azzurra. Last race just taking it easy and making sure we got round and so got a very nice third to win the regatta.”

Talking of their second overall for the season Stead concluded:

“We were a little slow out of the blocks, a little late in terms of getting the boat ready and a little behind. It’s all those little things that you’re looking for that hurt you. I think that the strength of a good team is to be able to recognise its weaknesses and work on them and keep plugging away and that’s exactly what Quantum Racing has done this year and I’m incredibly proud of the year, second place, winning the last two regattas. We know that we are in the right place and heading in the right direction.”

The highly charged three cornered fight for third overall on the 52 SUPER SERIES podium went the way of Takashi Okura’s Sled. This battle required the last race of the season with Platoon starting with a two points cushion. But with Ross MacDonald on tactics and Hamish Pepper strategy they were able to finish fourth to Platoon’s ninth and Bronenosec’s eighth and so secure third overall for the season.

MacDonald summed up: “The podium is huge but more important was the owner-driver category and so it was a double win for us. We never expected to be on the podium but we definitely wanted to be one of the contenders in the owner-driver category so it’s a great result. I have to add that it is a little bit difficult when you are sailing to try and finish in these positions because normally you go to a regatta and you try to win or finish on the podium and here you’re dealing with a lot of math, high numbers. To go eight or ten races on the defense is a little bit difficult.”

And fast and sailing loose with nothing to lose in their one and only appearance at the 52 SUPER SERIES with several of the Rán Racing crew on board, proved a successful formula for American visitors, Jim Swartz’s Vesper. They won the first race of the regatta and the first of two today, finishing third overall. So their podium success record is 100% after their European cameo outing in Capri last year saw them second, a great result for the 2007 built ex Quantum Racing.