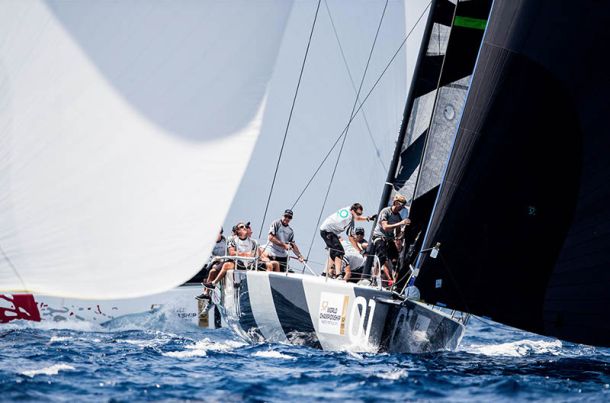 When they won the Official Practice Race on the Bay of Palma today Quantum Racing confirmed that they have their machine – boat and crew – in full winning order as they prepare to start their defence of the Copa del Rey title Tuesday.

Theirs was a conclusive win today in 10-14kts of Palma sea breeze, leading the 11 boat 52 SUPER SERIES fleet at the first windward mark and then staying ahead all the way to the finish gun.

By comparison with recent years the 52 SUPER SERIES champions’ season so far has been light on success stories. Indeed they have won only one 52 SUPER SERIES race this season. That is in large part attributable to the changes of helm and afterguard at each regatta which have been planned since pre-season.

But with young Dalton DeVos back steering today, Terry Hutchinson on tactics and Ado Stead on strategy, Quantum Racing were back at their best today, proving uncatchable. Dalton DeVos will steer the first two days of the regatta and his father Doug – one of the 52 SUPER SERIES founders and key stakeholders – will steer the final three days. And for all that Terry Hutchinson and Dalton DeVos had not yet sailed together on the Quantum Racing TP52 at all before until today, everything clicked perfectly.

Quantum Racing’s Hutchinson is just one of the many 52 SUPER SERIES sailors arriving in Palma riding the crest of a winning wave. He and Ado Stead were key members of the Bella Mente crew which won in Cowes, England at the Royal Yacht Squadron’s Bicentenary International Regatta, as did Tony Langley and his other TP52, also Gladiator. Vladimir Liubomirov’s Bronenosec team won an RC44 event in Sweden and Vasco Vascotto and Giovanni Cassinari of world championship winning Azzurra won the Farr 40 California Cup last week with Enfant Terrible.

“Vasco went straight from winning the World Championships to win a Farr 40 regatta so clearly I have my hands full!” smiled Terry Hutchinson.

He continues: “Our approach here is much the same as it was when I was in Porto Cervo. You look to survive the first half of the regatta and see where you lie Friday and Saturday. We have talked about how this is a hard venue to sail. You have to be patient. And you have to know the nuances of the race course and fortunately we have sailed here enough to know how to balance that risk-reward. And Doug and Dalton are going to alternate. Doug will come on for the second half of the regatta, Thursday, Friday and Saturday. And so that puts extra pressure on the philosophy of being patient. But Dalton has been doing a truck load of sailing. So that may have been our first day sailing together, but he if very, very good. It was great today. He is a talented sailor and has had some great instructors and mentors in Jonathan McKee and Morgan Reeser and the guys who have helped him a lot in the Melges 32.

“For me it is business as usual. We have no excuses. We are going to go out there and give it our best. We have no worries about changing over. They are both handy on the helm. For us on the boat we have had such great support from these guys (Doug DeVos and family) that it is an absolute pleasure to have them have the oportunity to sail with us. Doug has been our number one fan since 2008. The more he can sail with us, the better it is. He is a great leader for us.”

“Azzurra are sailing very well and we have to make sure we keep refining our gear.”

For a competition debut, albeit a practice, Steve Benjamin and crew on Spookie (formerly Interlodge) proved competitive – very much in the mix all the way through the race.

“We can expect a powerful sea breeze. As long as the gradient does not go to the south in the day then the conditions will be as good as we can get in Palma. It is what the locals call the Xaloc. The east breeze in the morning helps the return of the sea breeze.”

“The start is so important here. And in these conditions the left is favoured and so we saw that today there was a big traffic jam on the pin end of the start line.” Postigo concludes.

Racing for the 52 SUPER SERIES at the Copa del Rey MAPFRE starts Tuesday and concludes Saturday with a coastal race around the Bay of Palma scheduled Wednesday.