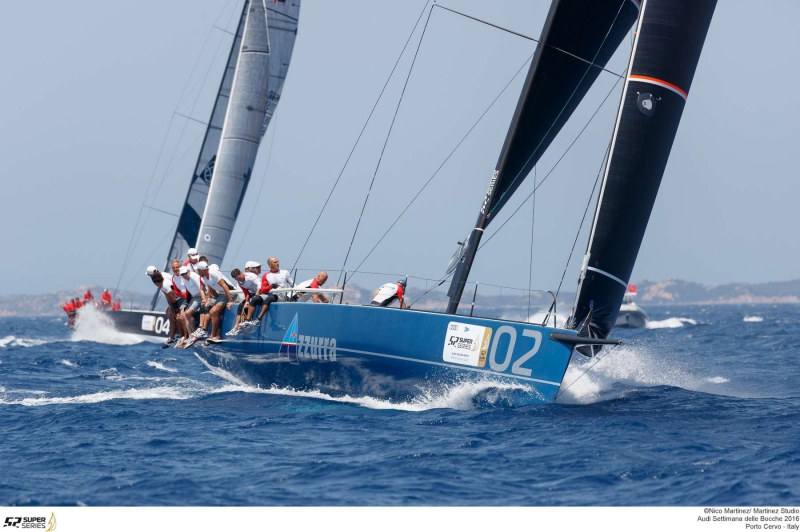 Porto Cervo: It was the second last day of competition and the four days of racing at the Audi Sailing Week -52 Super Series have been suspenseful so far with several TP52 teams alternating in the leading positions.

After today, the provisional results, Quantum Racing is in first place followed by a new entry, Provezza IX, in second and Rán Racing in third at the event organised by the Yacht Club Costa Smeralda.

The fleet started a coastal race at noon in north-westerly winds at 17 to 20 knots. The course followed a long beat from the Passo delle Bisce to the Spargi Island, passing La Maddalena to starboard and Punta Sardegna to port. After passing Spargi to starboard the fleet retraced their earlier course and finished in front of Porto Cervo.

The Provezza IX Turkish team, with America's Cup veteran Peter Holmberg as helmsman, has gained positions and could finish on the podium. They are currently in second place overall, just two points behind the first placed team, Quantum.

Today, Quantum's American team had to battle with Azzurra, which, after a moment of difficulty, managed to fight back and finish second. Rán Racing is currently third overall after finishing fifth today.

Nacho Postigo, navigator aboard Provezza IX: “Today we got a good start and ailed well. Our tactical calls were spot on. We were clear and got what we wanted.

“Vasco Vascotto and his team did well today too; they got an excellent recovery after choosing the right side and were closing in on us. Coming back down from La Maddalena, Quantum was getting closer, but we kept the situation under control. This is our first victory in this season, thanks also to Peter Holmberg at the helm.”

Vasco Vascotto, Azzurra's tactician: “Today we sailed well and showed our winning personality. We didn't get the greatest start, so were forced to fight with Platoon and Ràn in the Cannigione Gulf.

“We sailed with gusto and never gave up and were rewarded at the finish were we got the wind shift right: from north-westerly to thermal from the south. This let us recover a position and a point, but in reality we were only consolidating the result of the good work done earlier.

The event will end tomorrow, June 25th, so expect a fight to the finish. The start is scheduled for 12 noon and winds are predicted to be from the northwest at 20 to 25 knots.

All information and full results: www.yccs.it/en/home.html