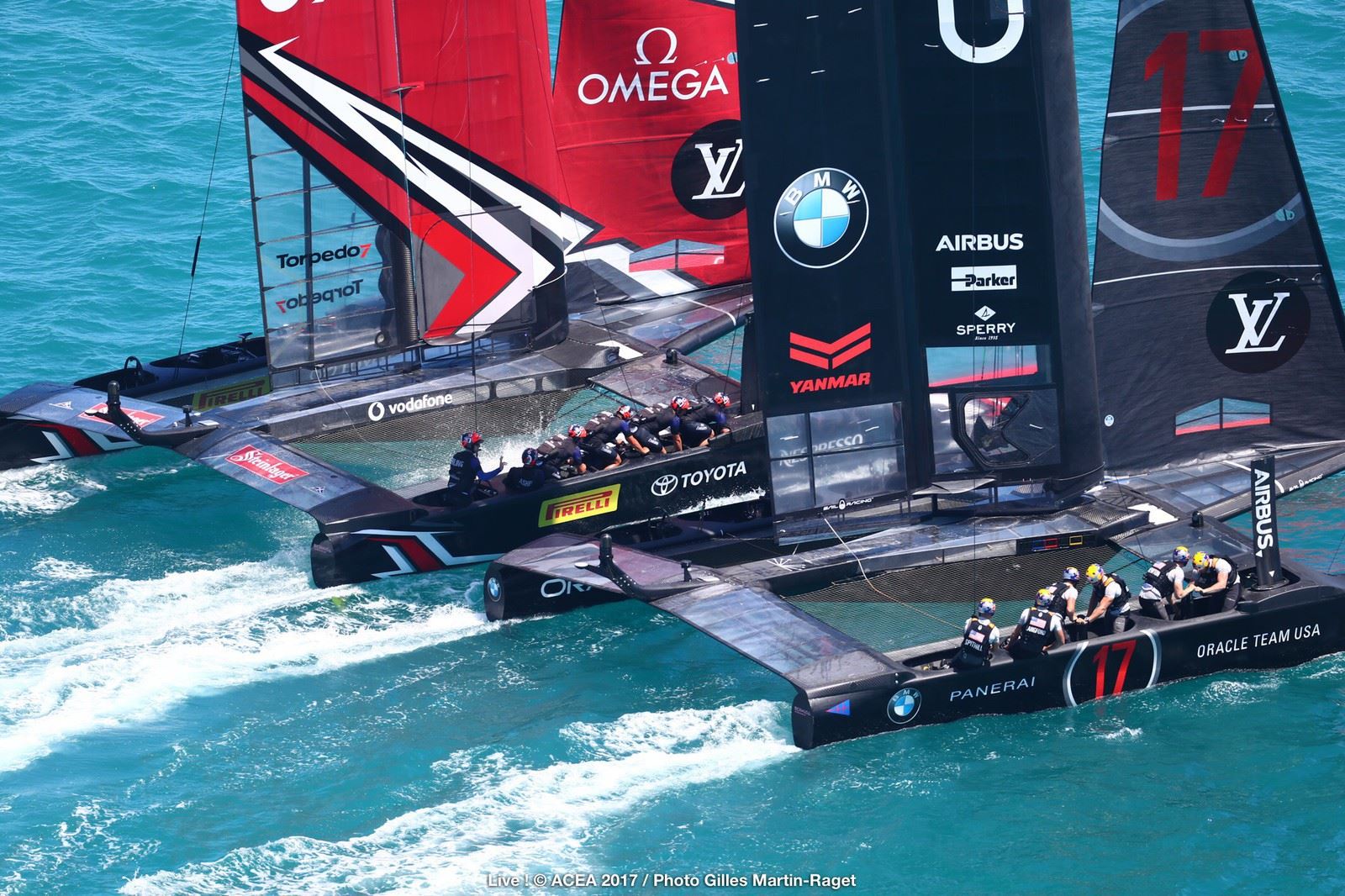 Peter Burling pushes Jimmy Spithill up into the wind before peeling away to win the start. Photo Gulles Martin-Raget/ACEA.

It was another light wind day in Bermuda as the 35th America's Cup charged head-first towards its climax. Team New Zealand started the day leading Oracle Team USA 4-1 in the first to seven series and it was business as usual for this young but seemingly unflappable crew.

Peter Burling looked vulnerable in the starts during the challenger series but he has been in control of his much more experienced rival, Jimmy Spithill, in the America's Cup match.

In the first race, Spithill attacked and sat on Burling's stern but Burling blocked the hook, pushed Oracle up into the wind and bore away with perfect timing to hit the line at speed. Oracle was to windward and with a better line to the reach mark but couldn't break the overlap and the Kiwis led by 3 seconds.

It was close during the run, with neither boat having a clear speed advantage. Both went left after the bottom gate, Spithill tacked and Burling covered. Oracle was sailing faster but NZ was pointing higher. VMG advantage was to the Kiwis.

Slingsby found some gains and the gap closed to 35 seconds, but it may as well have been three minutes. Even a slow gybe by the otherwise faultless Kiwis didn't allow Oracle any chance of victory. The margin at the finish was 12 seconds and the Kiwis were two wins away from regaining the Cup.

The telling statistic was the distance sailed. Oracle's average speed in both directions was a few tenths of a knot faster than the Kiwis, but New Zealand had won the race.

The cyclors were pouring water on their thighs during the break while Jimmy Spithill was repeating his mantra: “I think we can win, I really do. If we sail well enough we can win races.”

Those words came back to haunt him in the second race, where the Kiwis outsailed their opponents comprehensively.

With the wind fading to below 9 knots, Spithill again attacked but didn't have enough speed to complete the hook. The Kiwis performed a beautiful foiling tack, got underneath Oracle and pushed them into the wind. Burling peeled away and although there was no penalty on Oracle, they were left wallowing in the wake of the New Zealand cat and had a deficit of 14 seconds at the reach mark.

By the bottom mark the lead was 24 seconds and Oracle was looking for the miracle shift. Burling was covering, not letting them go and Slingsby had to call for a desperate move. He wanted to get through a light patch to reach better pressure and told his team, “It's going to be ugly but we've gotta go.”

The brave move was to no avail. Spithill tacked too late at the layline, crossed the boundary line and received a two boat length penalty. Any faint hope was dashed. Through the second run, the second beat, the third run and the sprint to the finish, the Kiwis could ignore their opponents and work the shifts to win by a comfortable 30 seconds.

It would be easy to say that Oracle again lost the race through unforced errors. But that would not do justice to the Kiwis. They are very comfortable with their boat and their systems and between them, Peter Burling and wing trimmer Glenn Ashby are exercising total control of the races from the moment they enter the pre-start.

The pressure of sailing against an opponent who stays on the foils for 100% of the time, who performs classic match racing manoeuvres with ease and who knows when to cover and when to run is proving too much for the defenders.

New Zealand is now on match point and despite Spithill's defiant declaration that “we have been here before” this is not San Francisco. In 2013, the Americans had the better boat and learnt how to use it just in time to come back from 8-1 down.

In Bermuda, the Kiwis have the better boat and they already know how to use it. Barring an overnight miracle in the Oracle boat shed, tomorrow will see famed Kiwi commentator Peter Montgomery reprise his famous line: “The America's Cup is now New Zealand's Cup.”

It looks as though the Auld Mug is coming back Down Under.