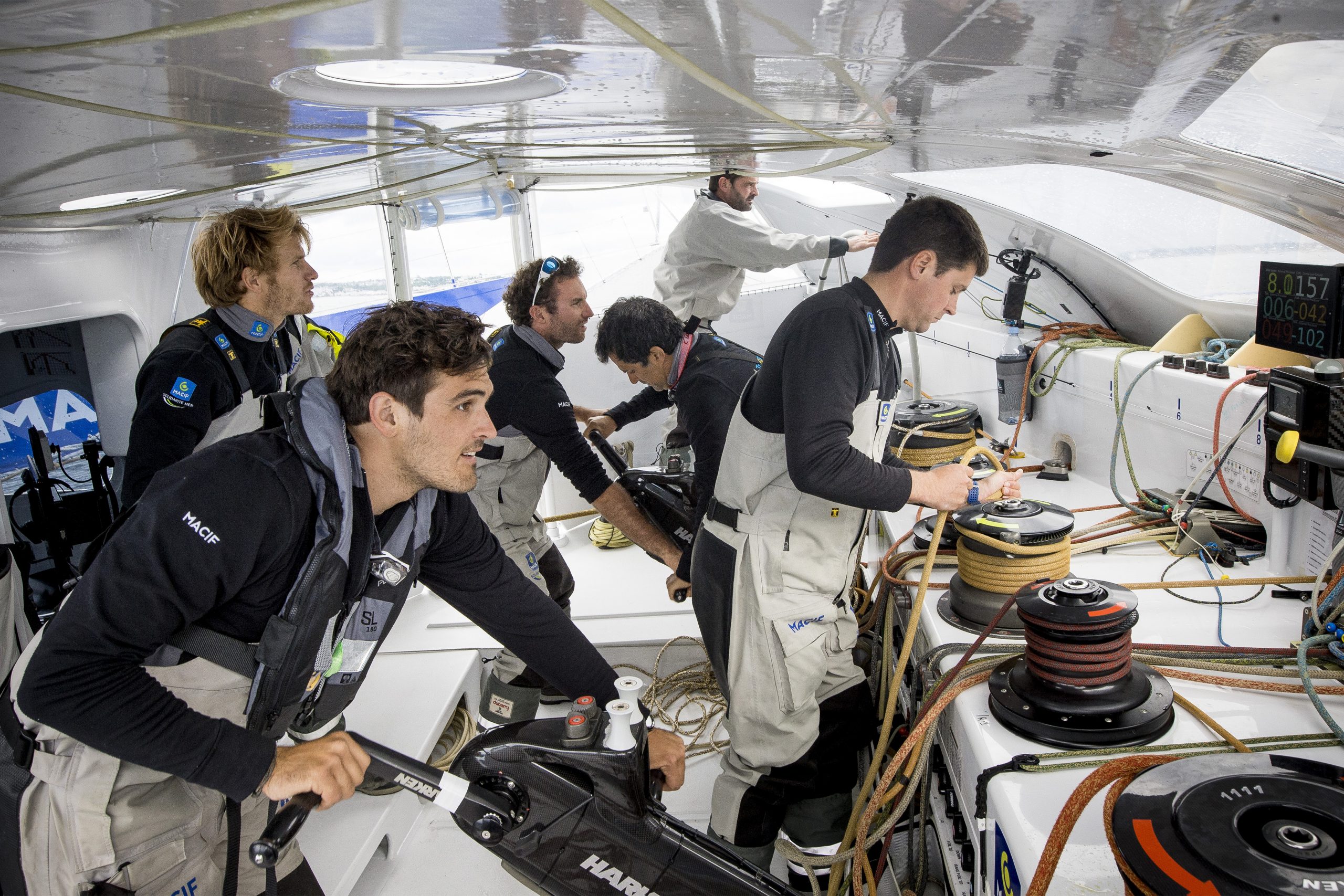 After a week of festivities in Nantes, France, MACIF arrived in St. Nazaire on Thursday evening, with François Gabart and his crew now concentrating on the start of The Bridge, at 7pm on Sunday local time in St.Nazaire.

Joining three other Ultima, the four will set sail for New York at the same time as the ocean liner, Queen Mary 2, which will sail alongside them at the start of The Bridge.

Little by little, Gabart and his crew, composed of Pascal Bidégorry, Antoine Gautier, Guillaume Combescure, Benoît Marie and Yann Riou are withdrawing into their own world. They are now concentrating on the trimaran’s last preparations and the weather for the start.

According to François Gabart, the start will be a “technical challenge. If the weather permits, the start should take place in front of the harbour of St. Nazaire, very close to the coast. It is no mean achievement to place five exceptionally large boats in such a location. I hope will be able to take some good pictures.”

Gabart remains focussed on the battle ahead against these three well-honed boats and crews: “I think we’re going to have a tight race. It’s difficult to imagine significant distances between boats of similar performances. A lot of ingredients are making it look like we’ll be at close quarters. This is great, since we love racing like that.

The line-up is impressive: “It’s wonderful. This is the first time we’ll be racing against Idec Sport, which sailed round the world in 41 days last winter, and we’ll see Sodebo again, whose circumnavigation took 49 days single-handed,” Gabart says.

“These two boats have marked sailing history. A high-performance trimaran will also be there. It’s exciting to compete with the best ocean racing boats, to continue to progress and prepare the single-handed round the world next winter.”

Two days from the start, it’s difficult to know what lies ahead weather-wise for the MACIF trimaran and her contenders in The Bridge.

“The situation is unclear”, Gabart says. “We have had uncharacteristically hot weather this week in France and we may well have a thunderstorm at the start. We will have to be patient to have an accurate view of the weather for the race.

“What we do know is the “unusually high” location of the ice. This opens a way north, in contrast to the very southern route that MACIF followed last year in the English Transat, which we won.

“It’s a difficult route, with lots of transitions to manage, because you are sailing counter to the weather systems. It is strategically interesting and lots of options are possible. We don’t yet know if we’re going to Greenland or the Canaries. The area we can sail in is very open”, explains Gabart. “How long will it take to sail the 3,152 miles? “Statistically, between 6 and 9 days.”

François Gabart intends to spend most of The Bridge in the cabin aft of MACIF’s cockpit. He will not stand watch. He will be in charge of navigation.

“I will stay there, including when I sleep, as if I was sailing single-handed, so that I don’t lose my habits and so that I can continue to prepare for the round the world at the end of the year,” he says.

The rest of the crew will take it in turns to steer the boat, with two men on deck permanently, one at the helm and the other trimming, and three inside the central hull resting (they will sleep on bead-filled pouffes). However, there will often be more of them on deck.

“We may have quite a lot of manoeuvring to do. The skipper says. “If this is true, we will need to be five or even six in unusual situations, such as the start.”

Everyone will be able to steer, including the skipper, who says: “In the USHIP ArMen Race, the only person who didn’t take the helm was me. This may still happen in The Bridge, and if it does, it means the crew is doing its job well and that we are interchangeable.”

MACIF trimaran 2017 provisional programme:
25 June: Start of The Bridge (race with crew between St. Nazaire and New York)
Mid-October: Start of the standby period for the single-handed round the world record attempt