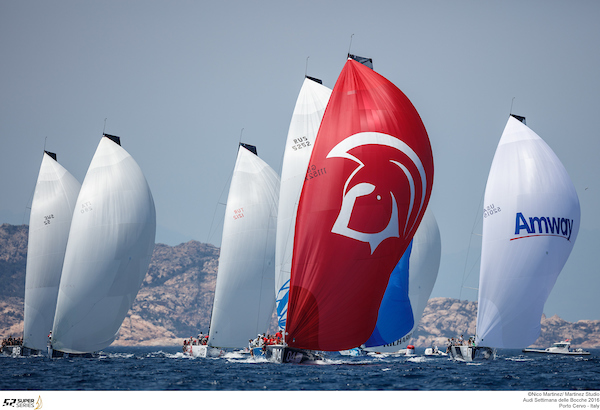 Wednesday’s transgression may be two days behind them, but Quantum Racing’s hard driving tactician Terry Hutchinson has in no way put the opening day mistake behind him, despite climbing to the top of the Porto Cervo 52 Super Series Audi Sailing Week standings.

Quantum Racing has scored 1,3,1,4 since retiring from the first day’s coastal race due to an error, but It still hurts. The pain is motivating the team to push harder and sail smarter than ever.

Coming off the water from a dominant first and a solid ‘counter’ of a fourth place, Hutchinson said: “We’ve had a very good day, but I’m still pretty disappointed about the coastal race, so I’m going to carry that because I need, and we need as a team, to feel the sting of it a little bit. It was an oversight in details.

“You know we have a great infrastructure on board with Ian Moore and I, that we double check the triple check… and well, it just got by us. It turned out to be small detail costing us five points.”

There is no mistaking Quantum Racing’s subsequent motivation, or its form. But, if there is any additional impetus – a desire to make good their mistake – the crew have sailed a composed, assured regatta since.

On a very left sided track when there was a premium to get left quickly, their start was fast but low risk, and their methodology as it always is, trying to stay in clean lanes, keep it tight and chip away.

That said, Doug DeVos’ team was a long way ahead by the finish of Race 4 of the series.
As soon as they had early control of the left side, where the backed wind blows out of the Paseo de Bisce, they were in to a rich get richer track, leaving Niklas Zennström’s Rán Racing to second with Harm Müller-Spreer’s Platoon in third.

Azzurra was over the start line in the pin end tussle which also saw Bronenosec forced to make a penalty turn. Azzurra further compromised her race when she tried to squeeze inside Bronenosec at the leeward gate and so were given a penalty. All in all, not a good start to the day for the host club’s team which finished 10th.

In the second race of the day, after starting only modestly, Gladiator’s Ed Baird was quick to recognise the left side collapsing slightly as the afternoon southerly thermal stalled the north-westerly.

After a close encounter with Quantum Racing, Gladiator tacked right into clear air on the middle right and able to profit. They found right hand pressure and, like their Quantum stablemate winners of the previous race, were able to eke out a handsome lead.

Baird, Gladiator’s tactician recalled: “We didn’t have a great start, but we held our lane for a long, long time, and it just didn’t look like the left was going to fill in.

“We were probably three minutes from layline and just needed to escape before we got really trapped. So we jumped out, and we were fortunate. All of us went on port tack for a while and things got stronger. There was a nice little right hand shift for us to capitalise on and off we went.”

During the starting line up the mast on Andy Soriano’s Alegre collapsed, breaking into several pieces. Considering they were up among the leading contenders overall, it is a huge setback for the Alegre team. Theirs is a new rig this season and it is understood they therefore have a spare and could be back for July’s regatta in Puerto Portals, Mallorca.

Rán Racing’s crew were not able to complement their second place with a good second race. Finishing 10th, they lose the regatta lead to Quantum Racing. After five races they are two points behind the 2016 champions Quantum Racing, as are fourth placed Gladiator who share the same 23pts tally.

Fourth placed Bronenosec and fifth positioned Provezza are also tied on identical aggregates, 25pts. Reflecting how tight racing is, only four points separate first from fifth.
Sharing the same points as third, Baird is happy with the way things are going on the new Gladiator.

“We’re smoothing out the rough edges. We certainly make mistakes, and we just have to limit those. But when we do things well the boat rewards us and we’re going nicely, especially in this kind of breeze,” Baird said.

“I think the boat is really nice. If we get behind we get beat up just like anybody else, and if we get ahead sometimes it feels easier, but it’s nice to have the boat reward us when we do things correctly. We were not feeling that way previously.”