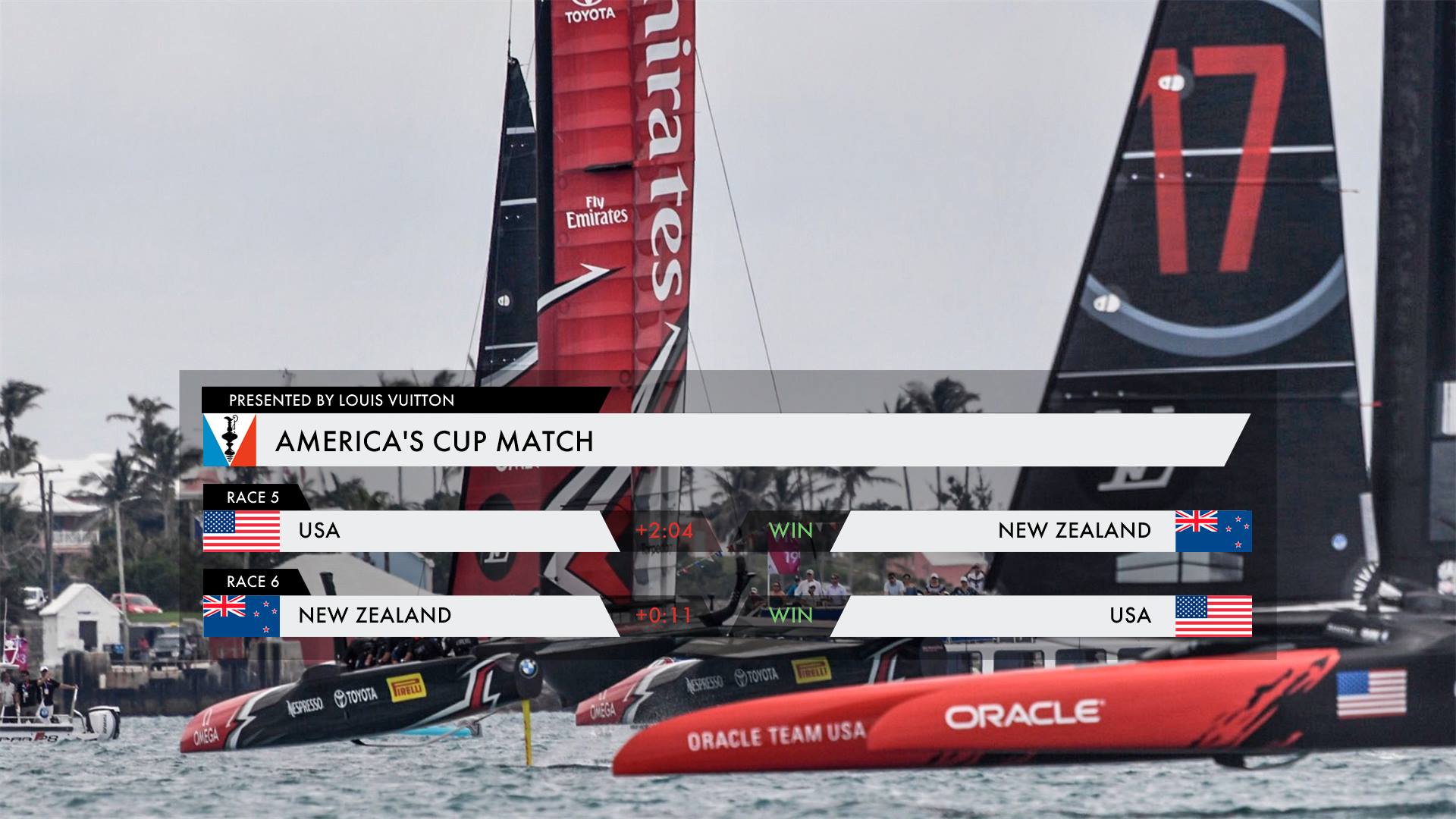 Oracle Team USA obviously made good use of the five day break in racing during the 35th America's Cup. Down 4-0 going into Saturday's two races, they came out with a lighter boat and a steely resolve. The cycling station which tactician Tom Slingsby used to add oil to the hydraulics had been removed and the set-up looked different, with the boat lower in the water.

However, in the first race it was more of the same, when two unforced errors handed the win to the implacable Peter Burling and Team New Zealand.

The race started in 11 knots of wind and although it was reasonably consistent in direction it was very patchy, especially at the top of the course. During the pre-start, Jimmy Spithill put Oracle on the Kiwi's transom before pulling away into the superior position from which to launch a high-speed reach to the first mark. But the electronics that give him distance to the start were again slightly out and again Oracle was a split second early and had to pull back two boat lengths to burn off the penalty.

Burling has never been beaten when leading at the start and today was no exception. There was a brief moment of fun when Oracle picked a wind shift on the beat and engaged with the Kiwis in a classic match racing dial down. On Starboard tack and with all rights, Spithill aimed straight at the Kiwis, who were forced to alter course to duck the American stern. But the split gave Burling a lift and he returned the favour on the next cross, aiming at Spithill who was a fraction slow to duck and received a second penalty.

The penalty and the dial down forced Oracle into an extra tack and from there the race was over. The lead was 26 seconds at the top gate and New Zealand flew away on the next run, the next beat and the reach to the finish to cross over two minutes ahead.

Before the 35th Match began, we all thought Peter Burling's weakness was his starts. Nathan Outteridge had consistently beaten him across the line in the Louis Vuitton final and it was an area that Spithill “the pit bull” was expected to exploit. But in the first five races, Burling had prevailed and much was being made of the fact that he had never been beaten when leading at the start.

It was imperative for the American crew that they change the situation, and finally they did. Burling was the early aggressor but Spithill stayed clear. Then he put pressure on Burling and feinted a hook before pulling away and running up the line. Getting their timing right at last, Oracle crossed a fraction ahead and, with a better angle to the reach mark, could put on the after-burners and break the inside overlap.

The gap was six seconds by the bottom gate and ETNZ was forced to tack away to get clear air, allowing Slingsby to control the chess game up the first beat. At the first cross, NZ was on starboard but well behind. Then Slingsby spotted some better pressure at the top left-hand side and the gap had doubled to 12 seconds.

Just when Oracle looked in control for the first time in six races, the Kiwis found better pressure on the run and Oracle, in light air, got their numbers wrong again and over-stood the bottom gate. Suddenly NZ was 50m in front.

Instead of covering the American boat, the Kiwis decided to sail their own race and it worked for the first half of the final beat. But again Slingsby found some darker patches of water in the top left and the match race was back on. Burling went for a big dial down and forced Spithill to duck his stern. Coming back the other way, Jimmy returned the favour and this time it cost Burling dearly.

Struggling to lay the gate, the Kiwis' speed dropped off dramatically and by the time they squeezed around the mark, Oracle was gone. They raced away to finish 11 seconds in front.

The score was now 4-1 to the Kiwis but Jimmy had his first win and had equalled his boss, Sir Russell Coutts, with his 14th race win in the America's Cup.

In the after race interviews, Burling was his usual unflappable self, parroting the party line of “we had a good day and we'll go out again tomorrow and do it all again”.

Spithill was slightly more interesting, saying, “we had a good improvement in boat speed and hopefully we'll take another step tomorrow.”

Racing resumes at 3am Eastern Australian time on Monday morning.