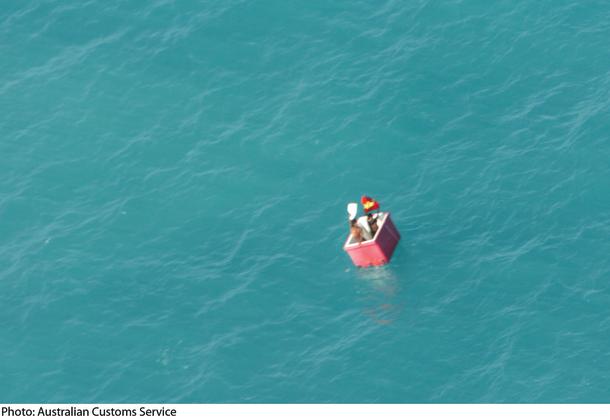 Boat owners are aware of the need to carry regulation safety gear on their vessels. Authorities have strict regulations as to what is required when going cruising. So, what do the powers-that-be want?

In Queensland, where I live: an emergency positioning indicating radio beacon when operating more than two nautical miles from land, plus a signalling device, V-sheet and PFDs for each crewmember. Many boats carry liferafts plus there are some multihull owners who are so convinced that at some stage their catamaran will flip they attach ropes underneath the wing deck. But is all this enough? Do these precautions ensure our survival in the event
of an unfortunate accident?

I clearly remember an incident in 1983 when a trawler sank off Lodestone Reef near Townsville. Ray Boundy was the skipper and I can still see him on the television news, alone in the ocean except for a killer shark. But guess what piece of equipment saved Ray’s life. Was it a regulation Australian Standards approved life vest? No! Was it a liferaft? No!

It was part of an Esky lid.

We watched, our hearts in our mouths, while the news chopper hovered overhead and Ray kicked for his life as he clung to that piece of foam. I breathed a sigh of relief when he made it across the reef just ahead of the five metre tiger shark that had, over preceding days, toyed with and killed his two crew members; then stalked him since.

So I started to think, have there been any other incidents where lives have been saved by this ubiquitious piece of equipment? These days, it is relatively easy to research just about anything so I began checking old newspaper reports on the internet. I immediately found a few incidents where boats have sunk and lives have been saved, not by regulatory sanctioned equipment, but by Eskys or parts thereof.

In January 2009, two Burmese fishermen were found inside a large esky which they say had drifted around for nearly a month, before being sighted by a Coastwatch aircraft in the Torres Strait. The 20 year olds had been on a twelve metre fishing boat with 18 other persons when it sank in rough seas. According to the men the rest of the crew had been in the sea but had no lifejackets. Seas at the time were reportedly treacherous and authorities did not believe the rest of the crew could have survived that length of time without safety gear.

Almost a year before that incident, in February 2008, John Jarratt survived 30 hours in shark-infested waters by clinging to an Esky after his trawler sank. He was found by a rescue helicopter five miles off Lennox Heads. It is believed it only took two minutes for his vessel to sink when its nets were snagged on a reef. His workmate swam for twelve hours to the coast to raise the alarm. Mr. Jarratt said how he was determined to live and kicked and paddled while he clung to the Esky.

The Courier Mail reported on November 6, 2007 that three Townsville fishermen survived twelve hours floating at sea by turning their Esky lid into a makeshift sail after their boat sank. The owner said, “for the last 30 years that I’ve gone out to sea I’ve always had a big Esky in the boat. My thought has always been ‘if anything goes wrong there will be the box to hold onto’ and on Saturday night it happened.”

On April 9, 2000 the Sunday Mail’s story headlined ‘Survivors! Amazing escape as two cling to Esky!’ They drifted in shark and crocodile-infested waters for twelve hours before staggering on to a reef 20 kilometres away near Eagle Island later that day.

Another one was undated but happened in South Australia. Headlines read ‘Diver saved by Esky lid in 15-hour swim for life’. A 44 year old Port Lincoln abalone fisherman swam for his life when his 7m boat capsized in heavy seas. He and his 47 year old deckhand clung to the upturned hull for several hours. The deckhand was terrified of sharks so the owner swam for help. He headed off in a wetsuit, fins and an Esky lid for extra flotation. He swam for 15 hours through shark-infested waters.

So, when we are fitting out our boats with safety gear, along with the regulation life jackets, EPIRB, flares, V-sheet etc., maybe we should include what could well be the most important piece of life saving equipment: the ever popular Esky.

But, another dilemma. What size? Should we choose depending on the numbers and weight of our crew? What about families?

That leaves me with one more question: how can the Australian Government develop a standard for the Esky and police it?

Imagine being pulled over by the command: “Border Force, Esky patrol!” ≈