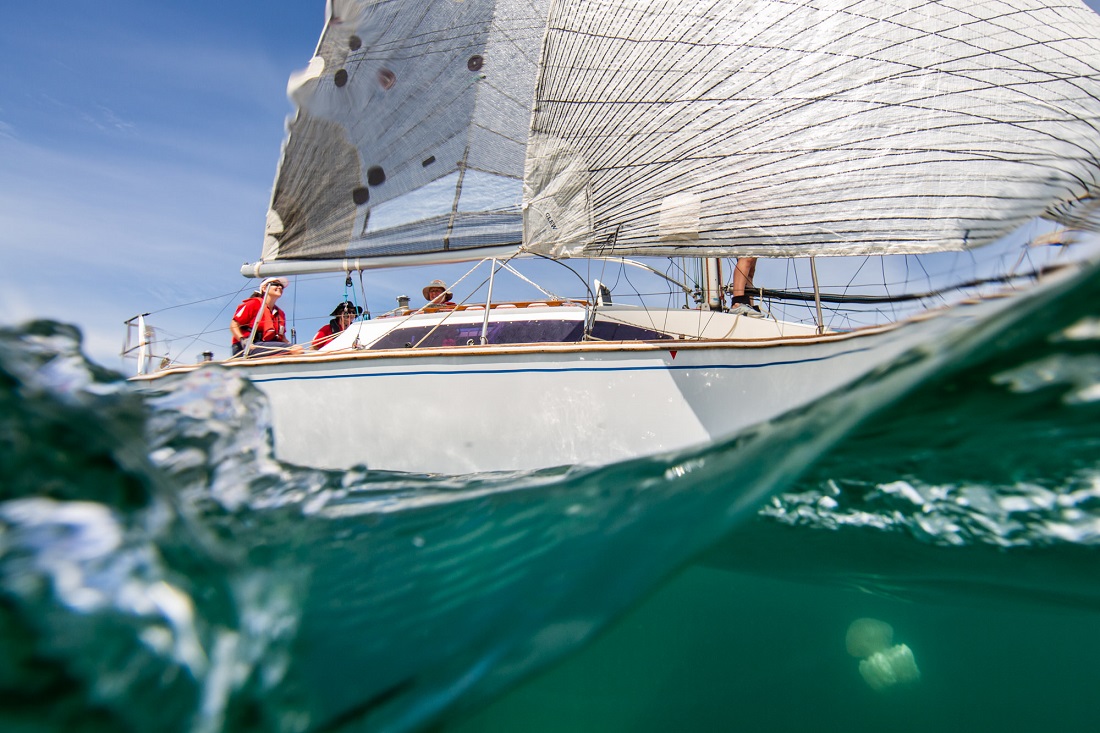 The Women in Sailing Challenge (WISC), hosted by Sandringham Yacht Club in Melbourne, consisted of three windward/leeward races, the first of which was delayed until the breeze filled in at around 4 knots from the west, but clocked east as racing settled in. It was a long day afloat for all – experienced and inexperienced.

Olding won PHS, the scoring system used to determine the overall winner. Back at SYC for the prize giving, she was ecstatic with her win “Pretty light day – the wind gradually increased – it was a very technical sort of day. It glassed out completely, so there was a short delay before started.”

By the last run of the last race, the breeze finally increased to 10 knots. Too little too late – but not for Olding and crew who sail shorthanded, five-up on the Summit 35.

“I think we sailed pretty consistently overall. We had a few little stuff-ups in each one, but we were happy generally,” Olding said.

The Melbourne skipper summed their day up, “Lots of fun, really good competition and it was great to get up amongst it. Eliza Aird had her first day on the bow and she really stepped up, she was fantastic.”

On the competition: “We were pretty close to Salamander II (Monica Jones). In a couple of races we finished with seconds of them – within a boat length of her.”

Monica Jones and her Adams 10 won IRC overall. She seems to be the benchmark of the fleet, according to a number of competitors.

“I didn’t realise I was,” Jones said, shirking off the praise. “I guess our kite stands out (it’s bright pink). It’s all about looking good,” she said, laughing.

The Royal Melbourne Yacht Squadron member was more enthused about the increasing number of women coming into the sport and improving through this series.

“Every year we’re getting new people into the sport. I sail on Saturdays with my usual crew, but at these women’s events, I have some crew with me who aren’t familiar with the boat. It’s not easy, because we don’t get a chance to train – that happens during the race. By the end, everyone is tired, because they are learning. But it’s wonderful getting new women into our sport,’ she said.

“We try to get women who do club racing to step up a bit in this series – get them up to speed. A lot have come from other clubs, sailing on boats where they are told what to do, without thinking about why they are doing it. This way, they’re actually learning.

“I put the boat on the start line alright, and then I have to get the crew to do the rest. Remember that each boat must have a female at the helm, on the main and on the bow. It’s not always easy, but it works.”

“We spent a little bit of time floating around, and when we finally got going (started), it was challenging, but we chose the correct side of the course and it paid off.

“The racing was competitive – it certainly worked for us in the end. Windward/leewards suit the J24s; that’s the type of racing we’re accustomed to, so it worked for us,” she said, adding: “It was great to get up win up at our own club.”

Linton’s crew included three regulars from her usual J24 crew, and two who race regularly on other J24s. “So everyone is used to the one-design sailing. Each boat has its own way of doing things, but everything came together nicely for us,” she ended.

Megan Aulich, co-ordinating the event ashore, commented: “The Race Committee did good job getting the three races in at all, considering the conditions. The first two races were two lappers and the third just one lap, due to light winds and time running out.”

“Around 90 turned up – more than we expected, as there was a storm front coming through. We also had a lot watching on Facebook, as we streamed it live. Stacey, Jade and Sophie (the trio recently finished second overall in the Rolex Sydney Hobart) were wonderful and so down to earth and relatable.”

Royal Yacht Club of Victoria will host Race 3 of the PPWC when two races will be held; the postponed Shirley Freeman Trophy will start at 11.00am on Sunday 3 March, followed by the Val Hodge Trophy on the same course.

For all information, including Notice of Race please visit: www.womenandgirlsinsailing.com.au/keelboats/portphilip2018-2019/